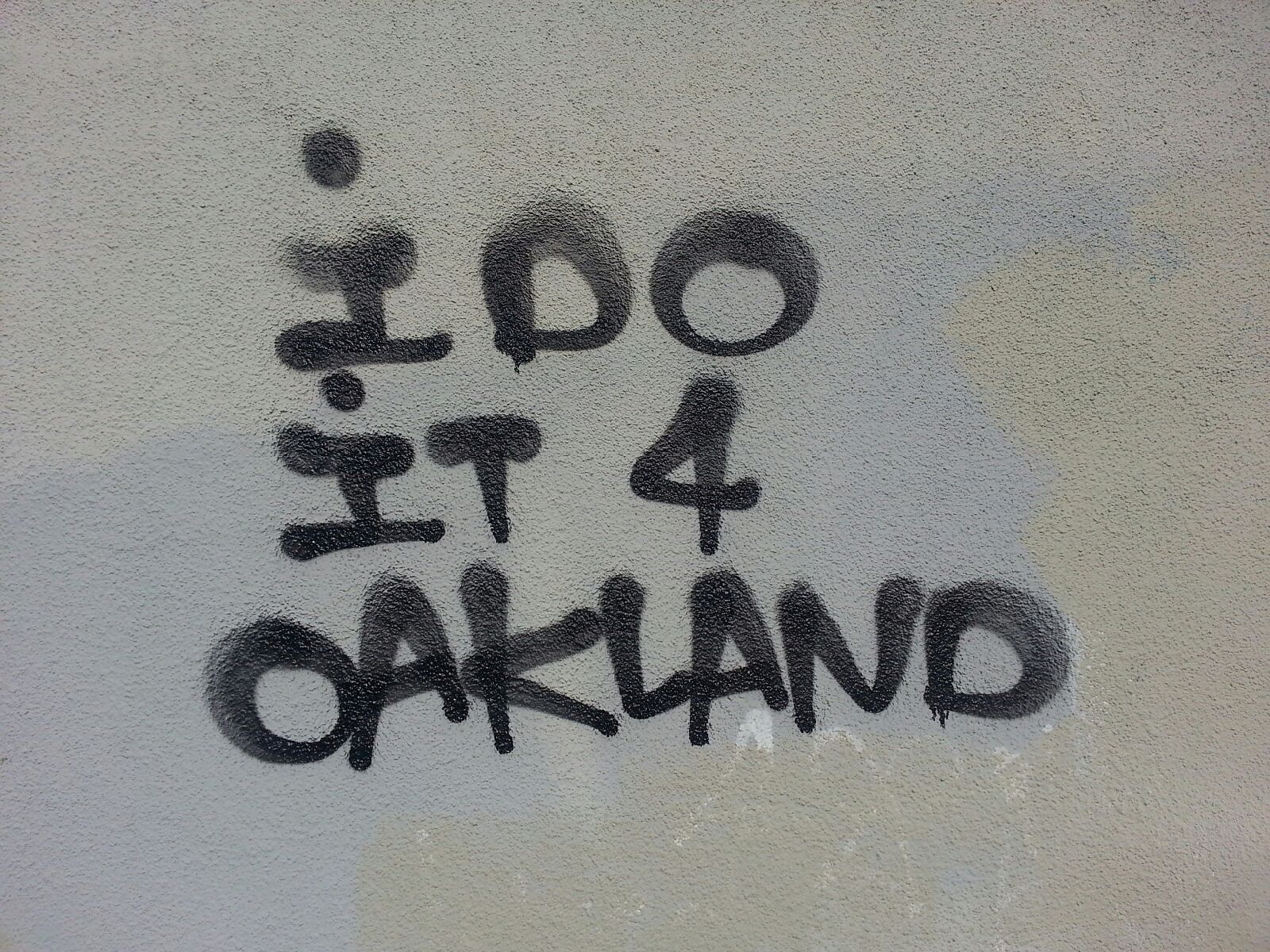 This spring, the city of Oakland was awarded two very distinct honors within one week. The Movoto blog officially named Oakland “The Most Exciting City in the Country,” as measured by their criteria of park acreage per person, population diversity, and museums per square mile. A few days later, the FBI released a report that named Oakland the “Robbery Capital of America,” with one in every 91 residents robbed last year.

Such are the dichotomies that define Oakland. We toggle between “What in the hell am I still doing here?” and “Why in the hell would I want to live anywhere else?”

Most of the time, I choose to stay.

But I do move around. Oakland is a city built upon movements: movements of people, movements of goods, but also social and political movements.

The movements of people began with the arrival of the Ohlone Indians, followed by the Spanish from Mexico in the 18th century, Chinese fishermen in the 19th century, San Franciscans relocating across the Bay after the 1906 San Francisco earthquake, and migrants from the South and Mexico during and after World War II who came to work at the shipyards and manufacturers. Although we’re a small city of less than 400,000, we have an international airport and a seaport and three major sports teams. Our social and political movements have included the (in)famous Black Panthers, the long forgotten La Raza Unida party, and a very strong branch of Occupy.

But can we move on now?

Oakland has to decide whether to be a city or a town. Should it stay itself, or link up to its surroundings—old money San Francisco across the bay, south to Silicon Valley, north to Napa Valley and the foodies? After all, Oakland’s food, business, and tech scenes are showing strong signs of life.

Or should Oakland remain what it is—and keep shrinking, a city becoming a smaller town?

The last census showed a drop of nearly 9,000 people from 399,484 in 2000 to 390,724 in 2010. Many families with school-aged children have fled to the suburbs out of safety and educational concerns. Is it possible to get the people who have left to come back, and to make Oakland a destination?

In the early 1980s, when I was in elementary school, my neighbors Ubaldo and Orlando returned from a trip to Ensenada with two cassette tapes: Run-DMC’s King of Rock and Bruce Springsteen’s Born in the USA. They were two very different music styles, but at that time and in this neighborhood, they flowed seamlessly together. I loved them both. They became my soundtrack for Oakland.

This mix, this flow, made even the simple act of going to school an adventure. The headquarters of the Hells Angels Motorcycle Club was two blocks away from my house. One of the first things I ever learned to read was the graffiti on a building across the street: “FREE HUEY!”—meaning Huey P. Newton, the minister of defense of the Black Panthers, who was in jail for murder. Here I was at the corner of Foothill Boulevard and 40th Avenue, a little Mexican-American kid sharing the same space with the Black Panthers and a mostly white motorcycle gang. The combination might have combusted elsewhere; in Oakland, we coexisted.

By the way, did you know that Huey Newton was born in Louisiana? And Sonny Barger, founder of the Oakland Hells Angels, in Modesto?

They found a home in Oakland. So did my parents, who met here after they emigrated from the state of Jalisco, Mexico in the early 1960s. My mom traveled back and forth between Oakland and Jalisco, voluntarily, before deciding to stay permanently here. My dad traveled back and forth, unwillingly, after being deported by the INS several times. Each time, he made the long trip back to Oakland.

I asked my parents how they chose Oakland. After all, it’s more than 2,000 miles from their homes, and there are plenty of places in between—Los Angeles, San Diego, the Central Valley—where they could have stopped. It turns out that they each had an aunt and uncle who had made the trip before them and had settled in Oakland. And so when my parents came north in their late teens and early 20s, they had a place to stay.

What kept them here was the mix that they and I love.

But I chose to leave Oakland.

I became disillusioned when Oaklanders voted former/future California Governor Jerry Brown in as our mayor in 1998. In 1995, Brown bought a loft in Jack London Square. At that time, there wasn’t much going on there or anywhere in the city, and he used this personal residence as a commune of sorts for artists, spiritual advisors, and a varied cast of eccentric figures. He became the Original Hipster, acting like a Pied Piper for Oakland and making the place cool again, at least for certain people.

But I wanted the mayor to be someone who had been here with me when the going had been tough—the Loma Prieta earthquake in 1989, the Oakland Hills firestorm in 1991—and Oakland had been left to fend mostly for itself. I supported one of the candidates, Ignacio de la Fuente, a Mexican immigrant who eventually became my voting district’s council member but finished well behind Jerry Brown.

So, in 1999, with the intention of taking a couple of community college classes and then transferring to UCLA (where of course I would write that Great American Novel), I moved to Los Angeles. I was always curious about how L.A., a metropolitan city, functioned, and having long been interested in surfing and underserved by Oakland’s nonexistent surfing scene, I wanted to see the sun, the ocean, the waves. I never made it to UCLA, but I did find my wife. And, after a few years, I once again learned to appreciate Oakland from afar.

I spent a few years traveling the never-ending streets and freeways of Los Angeles, but I could never capture the sense of community as I did in Oakland. Oakland’s small footprint makes you feel like you can wrap your arms around it. In Los Angeles, the cities bled into one another without any discerning borders or characteristics. I knew I had to go back home.

In 2006, my wife and I moved back to an Oakland I hardly recognized. Mayor Brown’s stomping ground, Jack London Square, has been revitalized, and through intense redevelopment of landmarks like the Fox Theater, the Uptown district is quickly becoming a destination spot for foodies and artists. Oakland is becoming the metropolitan city I went searching for elsewhere. There’s even an Oakland Surf Club now to help me daydream. Plus, I now have two young sons who were born and raised in Oakland, just like I was.

But Oakland still has the problems of an urban place, particularly crime; recently, we’ve experienced the heartbreaking murders of very young children. And it needs to do better integrating all its citizens into leadership. I have helped reestablish the Latino Connection Political Action Committee, in part because while Latinos make up 20 percent of Alameda County’s population, they account for less than 3 percent of the county’s elected and appointed officials.

Our city also faces some serious questions that aren’t unique to Oakland. Should a city with limited funds prepare its children to go off to college, thus risking that its best and brightest might not come back? Or should the city work from the top-down, improve its infrastructure, beef up its police force, and try to keep the residents and businesses that are already here?

In Oakland, I’d rather not choose. I reflect back on those days when I stood on that corner with Huey Newton and the Hells Angels, and think that we in Oakland should say “Screw That” to anyone who would make us choose. We’ll hustle to do both.