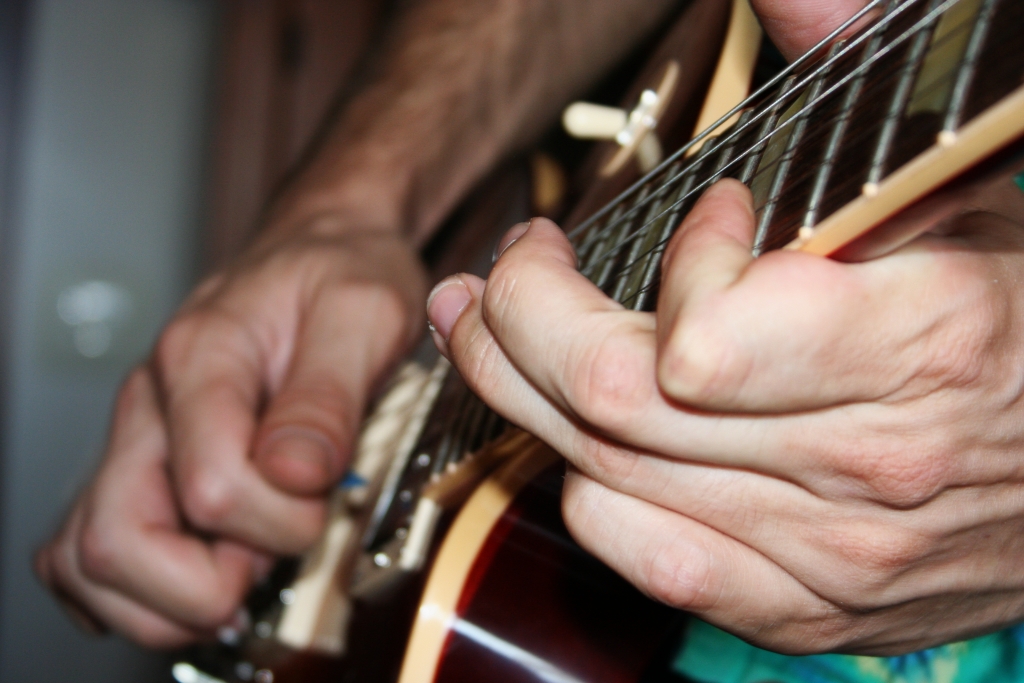 Have you been to the movies in Corona? If so, you may have heard me—performing not on the screen, but in the lobby of the Dos Lagos Stadium 15.

The crowds at the theater are small, but people have been appreciative. The space between the ticket booth and concessions is a strange spot to play—but I’ve learned that, in this day and age, if you want to make music, and if you want to be heard, you have to be willing to move around.

How did I get such a gig? The short version is that the movie theater management asked me to start performing there last year, and I accepted because, well, I had the time.

The long version begins in Garden Grove, in Orange County, and starts with a guitar.

It was my mom’s guitar. I always loved trying to play it as a kid, but I wasn’t any good and never took lessons. My mom did teach me how to play D, G, and C chords, but that was about it. She knew how to play the guitar and the banjo because her dad was a bandleader and vibes player who was on coast-to-coast ABC and NBC radio from Chicago in the ’40s after World War II. As a teenager, I started trying to play by ear, but I was never disciplined in my practice. I attempted many times throughout high school to write songs, but I was never able to finish any of them. I also played saxophone from fifth to 12th grade and competed with the Westminster High School band in field tournaments.

Of course, if you’d asked me about my musical career back then, I would have told you I dreamed of being a rock star. Instead, I married my high school sweetheart when I was 17 and she was 16, and we started our family very early in life, so music took a back seat to my role as a provider.

While I was in the Navy from 1988 to 1991 as a pump and valve repairman stationed on a submarine tender out of San Diego, I would bring whatever guitar I had out to sea with me. After the Navy, I played a bit as I worked for a building materials company in Anaheim as a warehouse worker and drywall stocker. A job with an auto finance company moved my family and me to Georgia, but it didn’t work out, so I moved my family back to Southern California—to Corona in Riverside County—and took a job as a warehouse manager for a drywall contractor in Orange.

The guitar gave me some hope as I battled health problems. In 2002, I was diagnosed with a heart condition that made it very difficult for me to work as a warehouse manager. After a few years, I finally got on the proper medication, and I was able to do about half the physical work I used to do. With our two sons in their teens and my daughter reaching school age, I decided I had time to try my hand at music again, so I started a rock cover band called Bad Fonzie with two high school friends.

After about three years of playing with them, I began trying to write original country songs, and decided to audition for America’s Got Talent as a solo singer and guitarist. I didn’t make it on the show, but the effort was inspiring. I finally finished two original songs—I was 38 years old when I finished my first ever—and recorded the songs on a handheld recorder. I discovered that inspiration could be fleeting, and I purchased an eight-track digital recorder and built a small room in my home so that I could record song ideas and lyrics as they came to me.

I left the band and declared myself a solo singer-songwriter. The Internet made this possible, because I could record and post my songs on Facebook and YouTube as soon as I recorded them. After a few years of posting my original songs online, a small country venue in Temecula, Country at the Merc, called to ask me to audition to play their annual benefit concert.

I passed the audition and performed a country cover song with their house band in the show. I returned to Country at the Merc for singer-songwriter showcases, and I was well received. This gave me the confidence I needed to continue, and in 2011 and 2012, I competed in the local Texaco Country Showdown at Knott’s Berry Farm. While performing at Country at the Merc, I was asked by a fellow songwriter to play in his booth at The NAMM Show, the world’s largest music products industry trade event. I played these shows in Anaheim in 2011 and in Nashville in 2012, where I also was able to perform three songs at the Commodore Grill off of Music Row.

So far, none of this has paid financially, and I have spent more money than I’ve made, but my songs have touched the hearts of many, and I’ve had the opportunity to play venues that I would have never dreamed of. I enjoyed performing at the movie theater in Corona, but it isn’t always easy getting—and keeping—the attention of moviegoers. But I have experienced some special moments, like when I would see people walking out of a movie and heading for the exit, only to stop and listen to one of my songs. People sometimes stop and tell me that I look like Kenny Chesney but sound a lot like Bob Seger.

The music, however, isn’t a total escape from real life. I lost my warehouse manager job in September 2012, and this summer my family and I moved to Columbus, Ohio, where two pastors from our church in Corona had started a church. I don’t know how long we’ll be here, or when I’ll make it back to Corona, but I do know that I’ll keep writing and recording, and I’ll always find places to play—and people to listen.