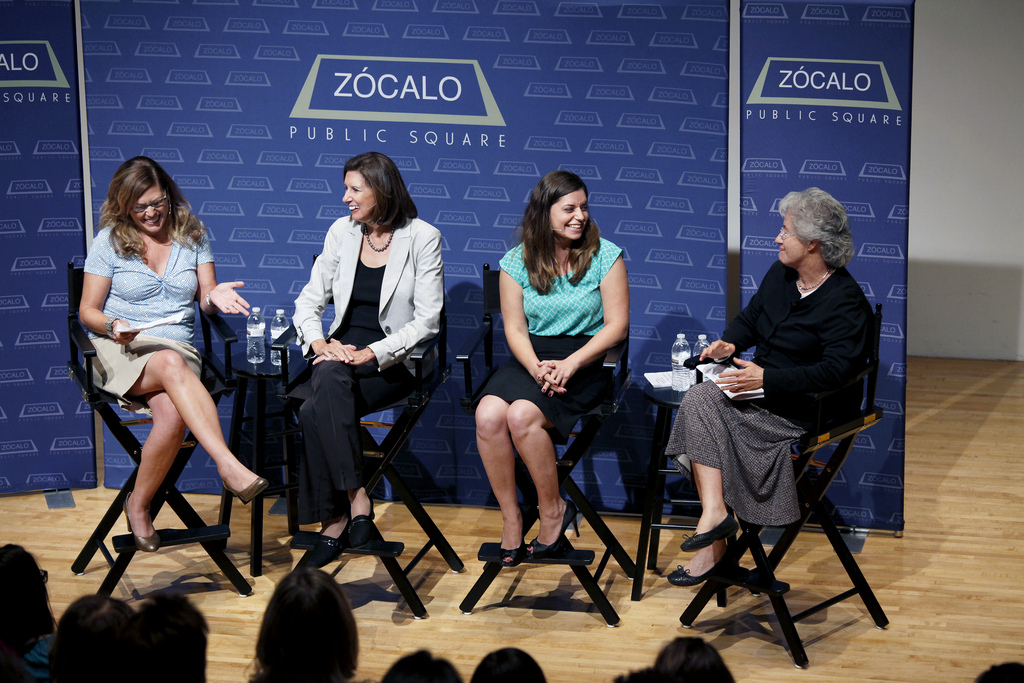 “I imagine that you’re all here for the same reason I am,” said Los Angeles News Group opinion editor Mariel Garza to an overflow crowd at MOCA Grand Avenue. “You’re somewhat mystified about why, in the 21st century, in one of the most progressive cities in the world, there are so few women in City Hall.”

But before asking the evening’s panelists the question at hand—“Why Are There So Few Women in L.A. Politics?”—Garza asked them to address whether gender still matters in politics today.

The world is made of men and women, and decisions made at the public table should be inclusive of all views, said Robin Kramer, a former chief of staff to Mayors Antonio Villaraigosa and Richard Riordan. Big decisions “are made better when we err on the side of inclusion.”

But, pressed, Garza, many of our male elected officials have very female-centric views—not to mention women on their staff. What difference does having a woman on the City Council make?

KPCC politics reporter Alice Walton said that Joy Picus, a female councilmember in the 1970s and 1980s, talked about issues like childcare and equal pay in City Hall that her colleagues didn’t discuss. Plus, women experience the world in their own way; studies show that men and women use public spaces differently, and a woman in office can argue for wider sidewalks for strollers or more lights at night for public safety.

“Historically, women have run for office to change the world,” added Kramer. “Maybe that has changed some, but I’m not 100 percent sure that’s why men run for office.”

So what has changed?

Walton said that today, just one woman sits on the 15-person City Council, the only female elected city official. But L.A. has had women on the Council since 1915, and by the 1970s and 1980s, women regularly got elected into the office. In 2001, the number of women on the Council peaked at five.

In 1993, Linda Griego became the first woman to run for mayor of Los Angeles. What, asked Garza, did the political landscape look like at that time?

Griego said that she felt she received a lot of support as a woman candidate from political caucuses, from mentors, and from other women, who pushed her to run—and who wrote checks. The majority of her supporters were women.

A lot has changed over the past few decades, said Kramer. But having women make up one-third of the L.A. City Council was, sadly, an aberration: In politics, “on corporate boards, in positions of influence in business—women are not found in the kind of numbers that we would all hope.”

Garza asked if there’s a structural issue in California politics as well, with members of the state legislature now choosing to run for City Council.

Seven councilmembers, said Walton, come from the State Assembly or Senate. How does a member of the school board—traditionally one office women come up through—compete with those candidates, moneywise?

Term limits in Sacramento have made the City Council a revolving door, said Griego; it’s no longer the springboard it used to be to get up to a higher office. She added that it’s also a challenge to make women into better fundraisers, because so much about running for office is based on raising money. She said that she had always been better at asking for money for other people rather than for herself. “It’s very difficult to pitch yourself, but that’s what it takes,” she said.

Garza said that Jan Perry, a mayoral candidate and former councilmember, said that women political leaders should look for their replacements and nurture women on their staffs. Is that kind of mentoring happening in L.A.?

It doesn’t seem that way, based on the ballot, said Walton, but Kramer pointed to County Supervisor Gloria Molina as a successful counter-example who had participated in a national effort that helped prepare women to run for office.

What we don’t have, said Kramer, is “the machine that galvanizes people to get into politics”—the role that political parties used to play. But this means there’s also an opening: “The moment is ripe for a multiethnic, a multicultural group of women and men—principally led by women—to create a pipeline to nurture and support women to run for office.”

Looking at the most recent mayoral race, Garza asked the panelists if they felt gender was an issue.

Griego said that while the candidates couldn’t say, “Vote for me because I’m a woman,” she didn’t think there was a gender backlash.

But Walton said that when the prospect of Wendy Greuel becoming L.A.’s first female mayor came up on the air and on social media, commenters weren’t very nice. “People would ask, so what?” she said. And missing from the conversation were the benefits of creating a culture of equality and a role model for young women.

In the question-and-answer session, audience members asked the panel to speak to recent campaigns and to offer their ideas about what can be done to get more women elected in the future.

How did Councilmember Nury Martinez win her seat in July despite having less money than her opponent?

Walton said that she had a low voter turnout but knew who was coming to the polls—“and worked her butt off.”

How do we encourage women to run for office in the face of all this male power?

“Don’t wait,” said Kramer. If women wait, others will step up. Anyone who has successfully run for City Council has created coalitions, has run for a reason, has had a path forward, has formed a good team, has had a real strategy, and has worked like hell. “But they did not wait.” 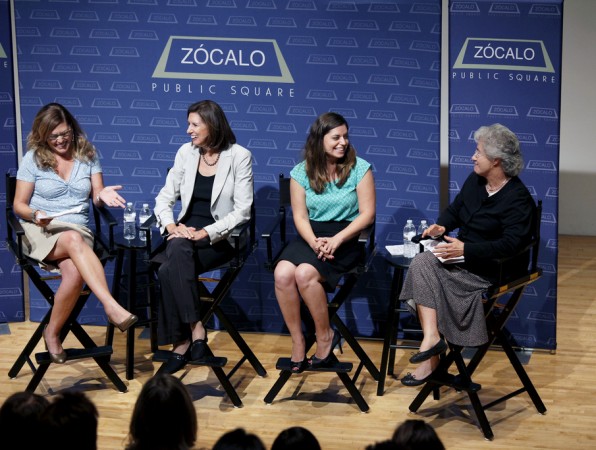 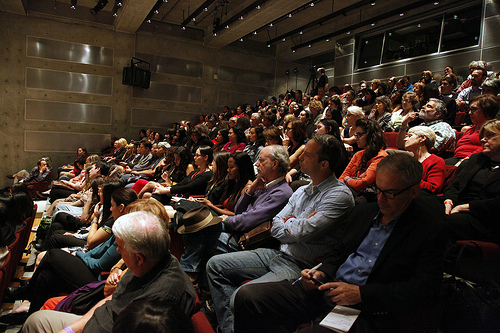 It was a full house at MOCA, with additional audience members watching in a nearby simulcast room 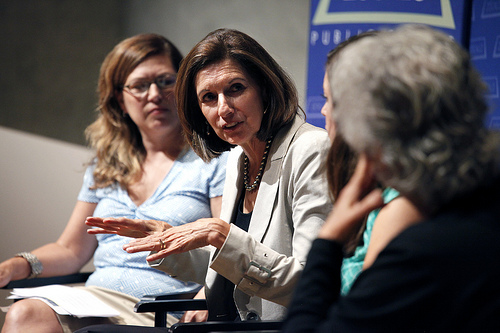 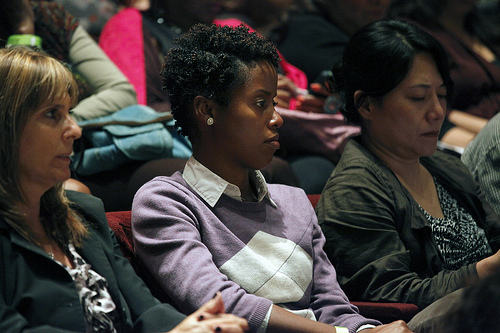 The audience at MOCA 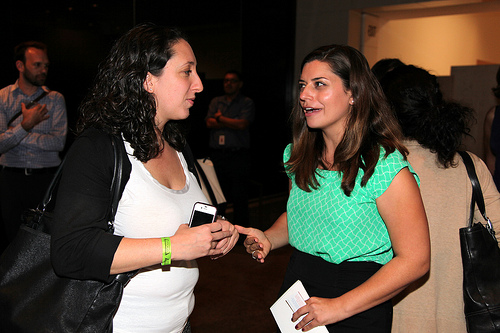 Alice Walton speaks with a guest 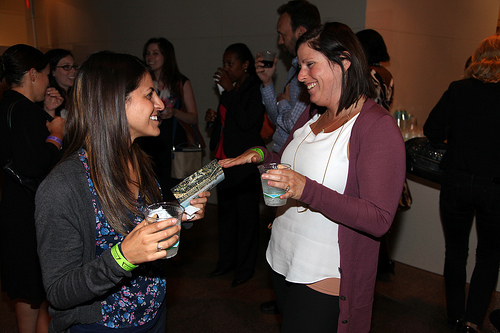