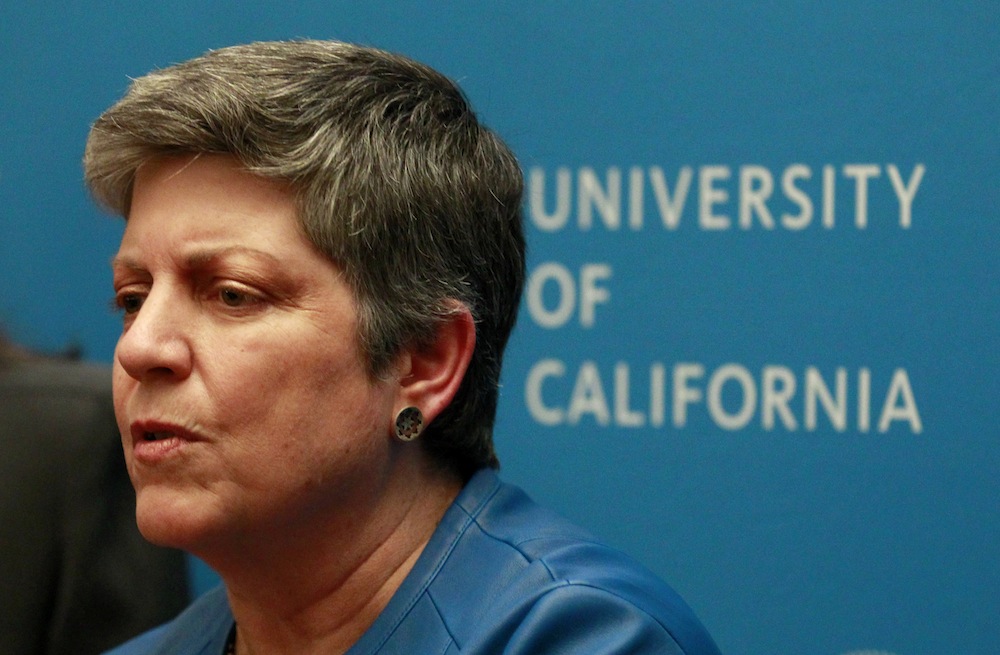 Janet Napolitano, who officially takes over as president of the University of California this week, has experience as Arizona attorney general, as Arizona governor, and most recently as U.S. Department of Homeland Security secretary. But she has no real experience in academia. Heading a major university appears never to have crossed her mind until a headhunter approached her about the job.

So why is she here, and what will she do with a 10-campus system that is so important to the state’s future? My view from the trenches—I work at UC Berkeley—is that she is the power pick of a majority in an increasingly restless UC Board of Regents. They want someone substantial to deal with Sacramento and push the university faster toward some new, yet-to-be-determined economic model. In this, she may be the right fit. Her official duties are largely political: to negotiate with Sacramento over UC’s share of the state budget, decipher the wants and advice of the regents, manage conflict and cooperation between the chancellors (the people who actually run the campuses), and work with the faculty’s Academic Senate on system-wide policies.

But in performing each of these duties she will face the same problem: deep misperceptions among the state’s lawmakers and the public about the nature of UC’s challenges. Napolitano will have to push back against critics and explain what it has meant to the state to disinvest in UC over the past two generations—and how reinvestment would help maintain access to the UC system and serve the economic and social needs of the largest state in the Union.

It’s a tall order. But here are some of the things she’ll have to make people understand.

First, many critics of California’s higher education system share the perception that UC has bloated operating costs that are picked up by the taxpayer.

In reality, UC has already seen a 30 percent decrease in state funding over the past decade or so. And the UC has cut its costs. The educational cost-per-student (including both graduate and undergraduate students) has declined by nearly 19 percent over the last decade, to $17,000 per student. And taxpayers pay very little of that. Today, for every dollar from Sacramento, UC generates $19 from other sources, including tuition and research grants. By drawing in so much money, UC more than pays for its state support in taxes generated for state and local coffers.

We also hear that UC faculty isn’t required to teach enough. In reality, faculty members are kept plenty busy. The average load is now five courses a year, and faculty members are teaching more students in larger and larger classes at both the undergraduate and graduate levels. In the 1980s, the student-to-faculty ratio was about 16-to-1; it is now 24-to-1. (At Harvard and Stanford, the ratios are about 10-to-1 or lower.) And faculty responsibilities don’t end in the classroom. Faculty members initiate and supervise group research projects with significant student participation; some 58 percent of seniors assist faculty in research or creative projects. And UC faculty has an equal responsibility to generate new knowledge and do public service inside and outside the university—part of the job description under UC’s state charter.

Critics accuse the UC system of gouging students with unnecessary tuition hikes, placing low-income Californians even farther away from dreams of higher education. It is true that families are also facing much higher expenses. UC has raised tuition fees from about $8,000 a year a decade ago to about $13,000 per year per in-state student, and that doesn’t include the high costs of room and board. But the tuition hikes are intended to help make up for the severe state budget cuts. They are also intended to help subsidize precisely those lower-income students about whom people claim to worry.

UC is moving toward what I would call a “Progressive Tuition Model”—essentially charging higher-income Californians more to help reduce the cost and debt for lower-income (and, increasingly, middle-income) students and their families. The state used to do this via its tax and spending policies, but now it’s up to the UC and the Cal State University system. UC is backing into this model—it is not a deliberate path—and no one is sure of the consequences if the price tag continues to go up. It’s an experiment.

Other would-be reformers allege that UC could be saving everyone lots of money by expanding more heavily into online education. Governor Jerry Brown, in particular, has been a booster of this idea. But such assertions are not being made with much regard for actual outcomes. The hard fact is that “traditional age” students (18- to 24-year-olds) have extremely low completion rates in purely online courses. And when students don’t complete courses and take longer to secure degrees, their educations cost more. Online education as thus far conceived is a needed supplement but not a transformative tool. Large classroom courses supplemented by technology seem to be much more effective as a model. A recent experiment with online courses at San Jose State University, funded by the Gates Foundation, suggests that large classroom courses may be cheaper on a per-student basis than MOOCs (massive open online courses) when you factor in rates of completion of the course.

What about just downsizing and paying people less? UC has been doing that. Over the past five dismal years, administrative overhead has been cut largely via layoffs, faculty salaries were cut by 5 percent, and faculty positions were reduced. Yes, you could cut faculty salaries more, but UC is, on average, already behind its competitor public and private universities. Faculty course workload could be increased, but it’s already at the high end for research-intensive universities.

So what path is there for the cost-cutting that Governor Brown and critics desire? One grim answer stands out: Shrink. After years of taking on additional students without increases in funding, CSU reduced its enrollment by some 40,000 students. California’s community colleges have cut courses, leaving some 200,000 students unable to gain access to course offerings. And UC has made forays in this direction, too; its leaders sense, correctly, that the social contract with the state is broken and that it should prioritize quality over quantity and access.

Some campuses—especially Berkeley and UCLA—have a different approach. They want more authority to set tuition rates at the graduate and undergraduate levels. Certain programs are breaking away to self-sufficiency and privatization; UCLA’s Anderson School of Business sought to become a semi-autonomous branch of UCLA. Such initiatives reflect national trends, but they have additional meaning at UC, which pioneered the notion of a multi-campus university system built on shared policies on admissions, tuition and fees, academic personnel, and quality assurance processes (like post-tenure review of faculty).

Since the 1930s, this has been called UC’s “One University” model. It’s hard to argue with the results of the “One University” approach: Most of the campuses rank in the top 20 best universities in the world, with high graduation rates and a record of generating the most patents and business spin-offs of any university system.

But the cuts in public support, and the constant pressure of managing such cuts, have embedded short-term thinking in the leaders of UC. How can they think of the future when we need to handle the next round of cuts? The short-term neurosis means that no real effort has been put into the question of how to grow in programs and enrollment to meet the current and future needs of California.

Virtually everyone—President Napolitano, UC academic leadership, faculty, the regents, and the system’s critics in Sacramento—will say they want to keep UC’s doors open as the state grows. But the reality is that without a significant reinvestment by the state, the resources for enrollment growth will not be there. In a deal cut with Governor Brown prior to Napolitano’s arrival, UC agreed not to increase tuition in the near term in exchange for the promise of a marginal yet meaningful increase in state funding. It’s an improvement—now we are treading water instead of sinking. But the deal also severs the link between enrollment growth and state funding. So UC has less incentive than before to grow.

A fundamental question thus awaits President Napolitano: To grow or not to grow? Reverse the historic disinvestment in UC and rebuild for the long term, or stay on the present course? Recent years have been discouraging, but the desire for California to create a sustainable funding and organizational model for public higher education springs eternal. This is a political problem, and Napolitano is potentially a powerful political figure. While she walks into a challenging situation, she has walked into challenging situations before. Now is a time for optimism.