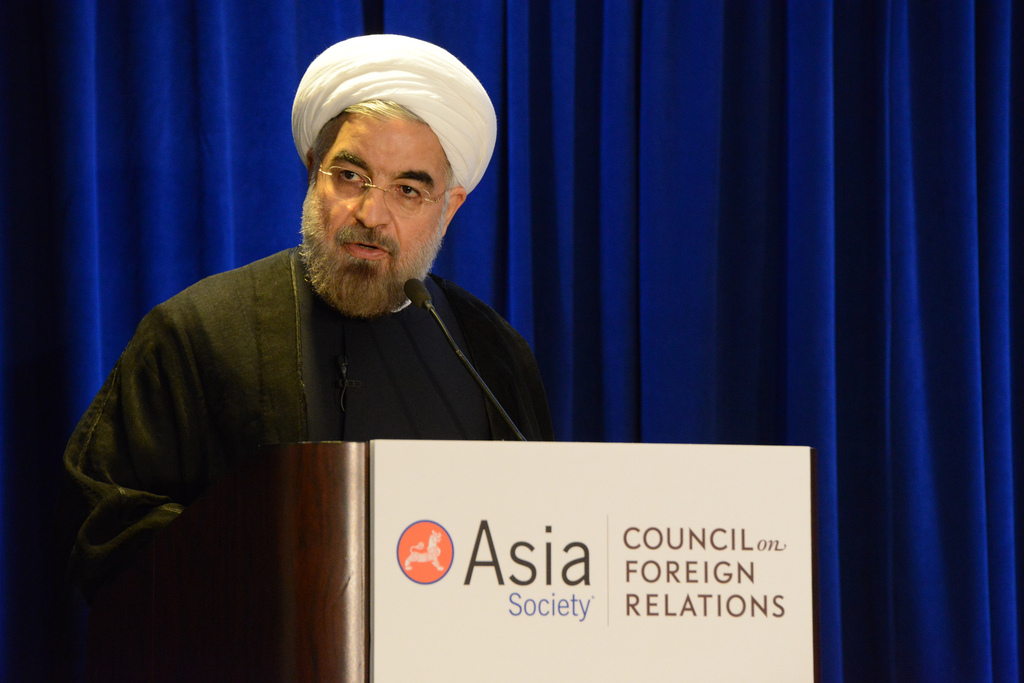 Iran’s 1979 revolution still reverberates across the world. A revolution in the truest sense, it swept away the old order, delivered a new one, reordered regional and global geopolitics, and spawned hope, inspiration, joy, terror, destruction, despair and disenchantment.

The one thing it didn’t do was improve people’s living standards.

Iran’s rulers, like all men of revolutions, live in the long shadow of the revolution that made them. To them, the revolution is both home and prison. As home, it is a source of identity; as prison, it locks them in ideological boxes, and spawns holier-than-thou tests of will between purists and pragmatists.

One thing we know about modern revolutionaries: They rarely make sensible policy choices that benefit their own people. They are too busy living up to the “ideals” of their revolution, fighting with foes, real or imagined, and, of course, remaking the world. Even 34 years on, the mere fact that new Iranian President Hassan Rouhani feared shaking President Obama’s hand in public at the United Nations and offered only a tepid endorsement of the Holocaust’s veracity tells the story of a political elite still boxing in the shadows of 1979.

Meanwhile, as Iran’s leaders have been trying to consolidate their revolution and spread it across the region, they’ve missed out on a far more consequential global revolution: the rise of emerging markets.

If we looked at the world economy in 1979, we would see a world GDP pie still dominated by the advanced, industrialized economies. So-called emerging markets—the term didn’t exist then—accounted for perhaps 15 percent of global GDP. Today, they account for nearly half. Make no mistake: The emerging markets revolution has transformed our world beyond recognition from 1979 and will be the fundamental driver of global change over the next several decades, as the new interconnected global middle class grows and new powers assert themselves on the international stage.

This revolution has made China a global power. Note to Iranian leaders: China did not become a global power when it went nuclear. It did so when it began making sensible economic policy choices, and unleashing the massive potential of its people. With the world’s second-largest gas reserves and third-largest oil reserves and a talented, highly educated population and a wealthy diaspora hungry to help the homeland, Iran too has that kind of growth potential.

The emerging markets revolution has given new weight to countries like Mexico, India, Brazil, Indonesia, Saudi Arabia, and Turkey—all members of the G-20, an expansion of the smaller club of nations that were used to calling the shots in the world economy. For all its bluster and influence in various regional hotspots, Iran is absent from the list of emerging economic powers, absent from the main event transforming the world.

South-South trade is on the rise, a New Silk Road of trade and commerce between the Middle East and Asia is exploding, and consumer companies are chasing a rising global middle class around the world. In all of this, Iran has been a laggard.

Yes, sanctions have much to do with Iran’s economic stagnation. The nation is losing up to $5 billion a month. Its oil production is down by about a million barrels, and its exports are at low levels not seen since the Iran-Iraq war of 1980-1988. Even the oil it gets to market does little to help Iran’s balance of payments because it can’t get paid in dollars or euros due to sanctions, so piles of rupees and renminbi and Korean won stack up in escrow accounts from Delhi to Beijing to Seoul.

But Iran’s economic decline did not begin with the heavier E.U. and U.S. sanctions enacted in 2011. No, it goes back to the beginning of the revolution. The year 1979 was a pivotal year for the emerging markets revolutions—the year Deng Xiaoping managed to bring China out of the long shadow of its own revolution and begin the process of market openings. The results have been a dizzying success: 10 percent average annual growth over three decades. While there is much to criticize in the so-called “China model,” it’s hard to quibble with the numbers on growth, and the hundreds of millions lifted from poverty.

Chinese elites have achieved a feat that Islamic Republic elites have yet to do: essentially ignore the legacy and vision of their revolutionary founders. That process for China started three decades (roughly a generation’s time) after its own revolution, but Iran has failed to make a similar adjustment in that timeframe.

Iran continues to suffer from its revolution’s self-inflicted economic wounds: the nationalization of industries, the persecution of experienced private sector leaders, the early 1980s closing of universities to “Islamicize” them, the government-spawned brain drain of elites, the crushing of dissent, and the antagonistic foreign policy stances taken toward the world’s major powers.

As a result, Iran’s economy has been underperforming for more than three decades. In a remarkable as-yet unpublished paper, Iranian-born economist Mohammad Jahan Parvar notes that Iran was an emerging markets star before the term even existed. From 1955-1978, Jahan Parvar notes, Iran’s economy experienced average annual real per capita GDP growth of 6.18 percent per year—among the highest in the world.

Recalling statements from leaders such as Ayatollah Khomeini, who once famously said that “economics is for donkeys,” Jahan Parvar writes: “The highest authorities of the regime, the supreme leaders and presidents, have routinely made decisions that adversely affected the welfare of the citizens.” Through a series of economic simulations, Parvar concludes that if Iran had avoided its revolutionary experiment and stuck to more typical policies embraced by emerging markets elsewhere, the average Iranian citizen would now enjoy a significantly higher standard of living.

This is a welcome reality check. We are too often misled by both Iran’s opponents (and its apologists) into thinking of Iran as a healthy, roaring tiger capable of regional (and world) domination. This is not so. The reality is that Iran’s economy makes it a wounded beast, a has-been in the world economy.

Turkey, the United Arab Emirates, and Saudi Arabia have companies that compete on the global stage. Iran has none. In 1979, tiny Dubai was a modest regional entrepot. Today, it is a global hub city and infrastructure and logistics powerhouse—one that Iran relies on to access the world. When Dubai banks announced they would no longer deal in the Iranian currency, the rial, Iran’s currency, plummeted 15 percent on the news.

Iran’s rulers inherited a land rich in oil, gas, and minerals, with a population of talented and skilled workers. Rather than leveraging these comparative advantages, Iran’s rulers squandered them. Brain drain is a chronic problem. Even as Hassan Rouhani was smiling at the world in New York, an alarming number of middle-class Iranians were getting on rickety boats in Indonesia to sail to a better life in Australia, only to be locked up on arrival.

President Rouhani, no doubt, understands the predicament. Indeed, his administration has stated on the record that the IMF forecast for Iran’s economic contraction of 2 percent was understated; that the figure was closer to 5 percent.

But while Rouhani was busy with nuclear negotiations in 2003-2005, the emerging markets revolution was gathering momentum. As the author and emerging markets investor Ruchir Sharma describes it, the year 2003 marked the beginning of the “fastest, most all-encompassing growth spurt the world has ever seen.” In his book Breakout Nations: In Pursuit of the Next Economic Miracles, he described 2003 as “an underappreciated turning point in the course of the world” as “good fortune suddenly spread to virtually all emerging nations.”

Iran, too, benefited, but not nearly to its potential as Western companies began their gradual exodus from Iran’s oil and gas fields, creating an opening for Chinese firms that have preferred to drag their feet rather than get petroleum out of the ground. Iran is the sick man of the New Silk Road. Iraq has surpassed Iran in oil production, and is back-filling lost Iranian orders in China and India. Iran has dropped from second largest OPEC producer to sixth.

Iran’s so-called ally, Russia, can only be pleased that Iran is locked out of natural gas markets by sanctions. It helps keep Russia’s stranglehold on European markets. Qatar has pulled twice the amount of gas out of a shared field with Iran, and Azerbaijan is emerging as a major regional oil and gas hub. But Iran still boxes in the shadows of its revolution.

Speaking at the Council on Foreign Relations, Rouhani referred to the emerging markets revolution, saying “the rapid growth of developing and emerging economies and their ability to achieve what is called catch-up growth suggests that their aggregate economic weight is about to surpass that of the advanced world.”

That is true, of course, but what he left unsaid was that absent a nuclear deal and the removal of sanctions, Iran will continue to sit out this global revolution.