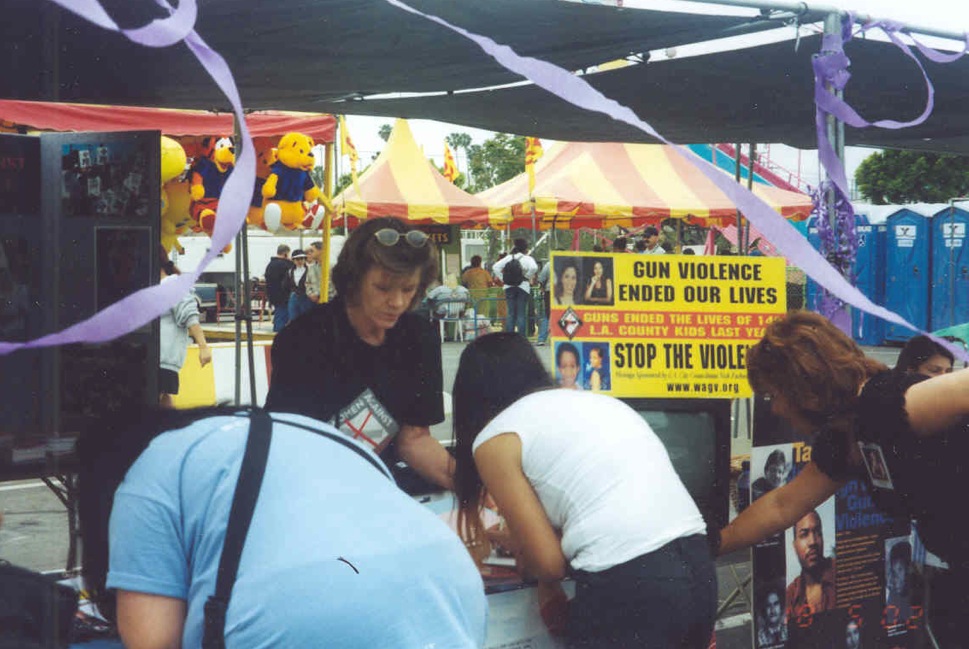 The phone call from Betty Friedan caught me by surprise. The surprise was not that the feminist icon called me. We were friends. It was that she called to order me to do something about guns. It was 1993 and there was a new effort to sell guns to women. Gun manufacturers were making lavender and pink guns with a smaller grip designed to fit a woman’s hand. The press was calling Betty to ask whether she agreed that for women to be equal, they needed to have guns.

It was never my intention to form an organization like Women Against Gun Violence. At the time, I was serving out the last few months of my term as a commissioner of the Los Angeles Police Department. I hoped to be reappointed by the new mayor, Richard Riordan, so I could continue to address the issues around women in the LAPD and help rebuild the department’s relationship with communities of color in the wake of the 1992 uprisings.

But another term on the police commission was not to be. And, after attending a conference of community leaders organized by Betty Friedan on gun violence as a women’s issue, I was hooked. On the last day of the conference, we talked about starting a new organization. Rabbi Laura Geller, director of the American Jewish Congress, invited us to become one of their projects.

We thought that perhaps women, who saw themselves as caretakers for their communities, could bring down the gun homicide rate. In 1993, there were nearly 40,000 gun deaths in the U.S.—unintentional shootings, homicides, and suicides. In Los Angeles, there were more than 1,000 homicides that year, about three every day.

Then-new research showed that guns in homes were more likely to be used against a family member or acquaintance, or in a suicide, than against an intruder. As a commissioner, I had learned that police officers—who had previously counseled homeowners to keep a gun—had changed their minds, in part because those homeowners now had high-caliber handguns and semi-automatics used by the military; the civilians had more firepower than the police.

Through my years working to expand employment opportunities for women in non-traditional jobs, I had connections with more than 100 community-based organizations. I sought out their agreement to form a coalition. In January 1994, we launched Women Against Gun Violence.

We never aspired to become a national organization, although we briefly worked with a group in Northern California in the hopes of forming a statewide coalition. With one full-time staff member and dozens of volunteers, we had a hard enough time keeping our local coalition organized and active. This was before e-mail, and most organizations didn’t even have a fax machine. If we wanted to alert our coalition members to an activity or ask them to participate in an advocacy effort, we had to contact them by phone or print out materials and send them by mail.

We worked to educate women about federal, state, and local gun legislation. We connected with survivors of gun violence—some who had lost a loved one, others who themselves had been shot—and came to understand their world. We focused on turning their grief into action by helping them prepare to testify at gun legislation hearings. They also told their stories at press conferences and rallies: a family caught in the crossfire when their son was picking up his soccer trophy; the family of a woman killed by a rejected lover; and many others who did not know the circumstances of their child’s death, only the finality of that death.

In the early years, Women Against Gun Violence held rallies and marches in downtown L.A. and participated in national events to raise awareness of gun violence. In 1995, 40,000 pairs of shoes—to represent 40,000 annual gun deaths—were placed around the fountain in front of the Capitol. The shoes came from across the country, and every pair had a note that explained the circumstances of the shooting. We helped send the 15,000 shoes collected in California to Washington, D.C., including many pairs of baby shoes.

We were cruising, largely because foundations were interested in gun violence as a public health issue. The California Wellness Foundation undertook a 10-year project to end gun violence, and generously funded Women Against Gun Violence—and continued to do so for years.

In 1995, Community Partners began handling our fiscal responsibilities. By 2000, our staff had grown to two-and-a-half, including a dynamic new executive director, and we decided to become an independent 501(c)(3) organization. That same year of the Million Mom March in Washington, D.C., we successfully staged our own 3,000-person march.

It was an exciting time. We worked closely with the city council to pass model laws in Los Angeles. One conference we hosted had the lasting effect of promoting better communication between the LAPD, FBI, and the Bureau of Alcohol, Tobacco, and Firearms.

Our programs have always involved the survivors of gun violence. They speak at schools and churches, to classrooms and parents. They tell their stories and share their ideas about gun safety. We have never supported the idea of taking guns away. We speak only about the need for safe storage of guns, how to talk with kids about guns, and how to help parents ensure that their neighbors’ homes (where their children might play) do not have unsecured guns. We talk to kids about bullying, dating, relationships, and, sadly, suicide. We also work with the Los Angeles School Police Department to distribute gun locks to the community.

Over the last 20 years, the climate for gun regulation has changed. California has some of the strongest gun laws in the U.S., including our background check law. We ban so-called assault weapons, although the gun manufacturers can come up with ways to get around that ban faster than the Legislature can pass a bill. (And Governor Jerry Brown recently vetoed a bill that would have prohibited those gun changes.) We also ban large capacity magazine sales. We are the only state with a program to identify people who purchased a gun and were later prohibited from gun ownership—people who bought a gun before 1996 and then committed a felony, were put under a restraining order, or were deemed mentally unstable. This year, the California Department of Justice hired additional agents to take those guns from people who shouldn’t have them.

On the national front, the Brady Campaign has been the leading face of regulation efforts. Recently, it has been joined by two powerful organizations, Mayors Against Illegal Guns, backed by Mayor Michael Bloomberg and his vast resources, and Americans for Responsible Solutions, led by former U.S. Representative Gabrielle Giffords and her husband, Mark Kelly.

Women Against Gun Violence works cooperatively with many local agencies and nonprofits, but competition for funding is inevitable. We face many of the same challenges as other nonprofits, and fundraising is almost a full-time job for our executive director. With few exceptions, foundations are not interested in supporting gun-related issues and advocacy. Most banks and major companies see issues related to gun regulation as too controversial.

Along with funding, we have to scrounge for community support. Interest and enthusiasm peaks after a mass shooting—but not because of the daily trouble of gun violence. If people we e-mail can “click on the link,” they will send messages to our elected official. But too few of us make campaign contributions or walk precincts. It is harder now to find volunteers to do those sorts of tasks, and to connect with young people.

So why am I still involved with Women Against Gun Violence—20 years after that call from the late Betty Friedan? My heart is warmed by watching the gun homicide rate in Los Angeles drop—from more than 1,000 when we started to less than 300 in 2012. I’m energized when I hear that a woman changed her mind about buying a gun when she realized how often guns in the home are used against a family member. And I’m honored to meet the courageous men and women who have lost a loved one and turned their grief into action by appearing at press conferences, testifying before government bodies, and even visiting prisons to help inmates understand the pain of loss.

Governments at every level have passed laws to make us all safer. But we still have a lot of work to do. We need national laws to prevent people from purchasing guns in Arizona and Nevada that are banned in California. Women Against Gun Violence is working on that—and we have big plans for a conference, school outreach, and other work to reduce gun violence in Los Angeles.