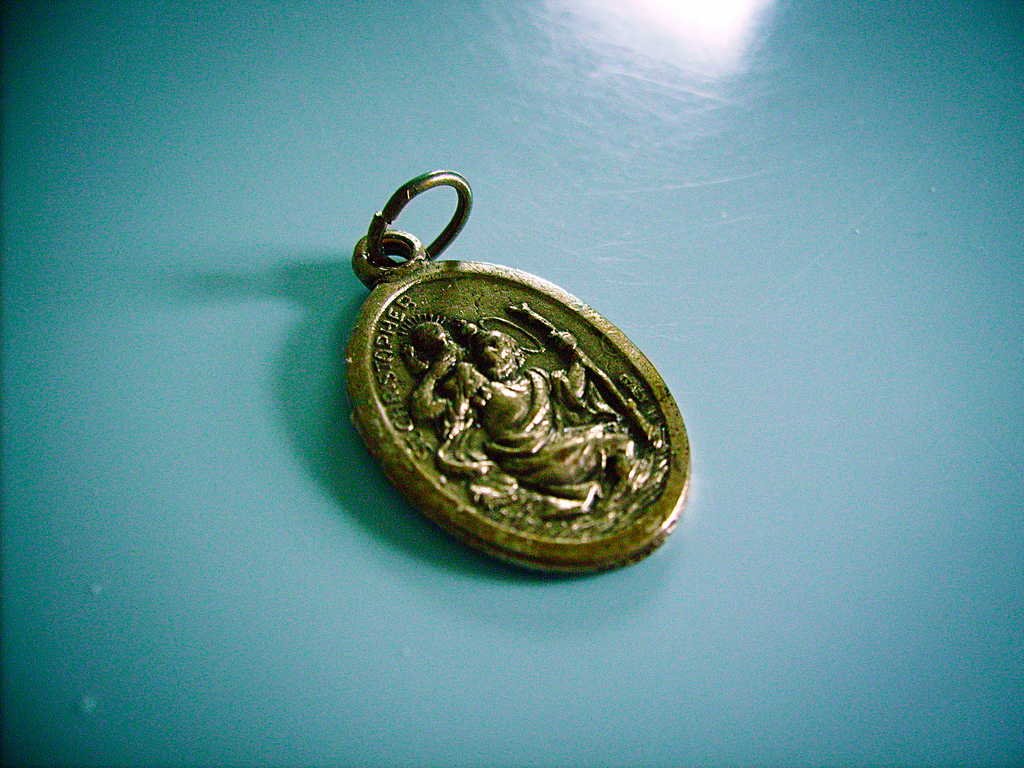 It’s the week of Halloween, that legacy of All Hallows’ Eve, and sainthood is thus in the air. Many of us have role models. Some of us also have (we believe) heavenly intercessors, saints who pray for us in heaven much as mortals might pray for us on earth. But, with thousands of canonized figures in the Catholic Church, there are many from whom to choose. Therefore, in advance of the Zócalo/Getty Center event “Why Do We Need Saints?”, we asked four Catholics to answer the following question: Who is your patron saint—and why?

I pray to St. Michael the Archangel daily. I became aware of him when I moved from England to take up my position as a professor in liberal arts and artist-in-residence at Thomas More College of Liberal Arts in New Hampshire, where the St. Michael prayer is sung. St. Michael is seen as a great protector of the Faith and the Church. We were working hard to reinforce the Catholic identity of the college at the time, and so, following the suggestion of John Paul II, repeated the St. Michael prayer after Mass in which we ask for his help and protection in our mission. I offered to paint a large St. Michael for the college chapel and, in the process of completing the task, I grew to love the saint. I painted him on a wooden panel four feet long and two feet wide in a medium called egg tempera, in which the pigment is put into egg yolk. This is an ancient method that was common in the Middle Ages. I am a convert to Catholicism with a strong scientific background (I studied physics at Oxford University), and I love the fact that St. Michael is a non-corporeal being, an angel, because it reinforces my faith in the idea of the supernatural and things invisible coexisting with the material world.

Another reason I love this saint is that he is depicted in the Book of the Apocalypse as a soldier waging the battle against the forces of evil. Prior to my conversion I had believed that there was no objective truth—that decisions about right and wrong or good and evil were just a matter of personal opinion. Now that I do believe in the existence of evil (and of an ever greater good!), I am reassured by the ultimate guarantee of the victory of good over evil, a triumph that St. Michael symbolizes. I was so enthusiastic about him that I not only painted a picture but also worked with composer Paul Jernberg in setting the famous St. Michael prayer to music. This is now sung at the college. You can hear it on YouTube here.

David Clayton is an artist, teacher, writer, and broadcaster. He holds a faculty position as artist-in-residence and lecturer in liberal arts at Thomas More College of Liberal Arts, Merrimack, New Hampshire.

Next April 2014, Karol Józef Wojtyła, Pope John Paul II, will be canonized—a swift acquiescence to the “Santo Subito!” (sainthood now!) cries from the millions of mourners who flocked to St. Peter’s Square nine years ago. To those who love him, he will always be the essentially youthful and joyful athlete, skier, actor, poet, philosopher, mystic, and nonviolent revolutionary who sparked the downfall of communism, defended human rights, transformed the relationship between Catholics and Jews, and won the hearts of young people around the globe. At the same time, he will always be the “suffering servant” whose courageous acceptance of illness, aging, and death carries the conviction that life is meaningful and worthy of honor even at its moment of utmost weakness.

As a philosopher, John Paul II developed new ways of thinking about the dignity of the human person, created in the image and likeness of God. Drawing upon the personalist movement, which attracted the most creative Jewish and Christian minds in Europe before World War II, Wojtyła maintained that humans are essentially relational beings; we find ourselves only when we give ourselves to others. He also worked to defend both science and religion against the various forms of relativism that undermine them, and to honor the wisdom found in the world’s diverse religious traditions. A prodigious saint-maker, John Paul II made the radical proposal that holiness (not to be confused with prudishness!) is the way to happiness and the proper aim of every human life. His first message as pope was “be not afraid”; his last message was his self-sacrificing life and death. I find it a comfort when I am afraid, and an inspiration when I fall prey to doubt or fatigue, to think of John Paul II among the saints interceding for us in heaven.

Carol Zaleski is professor of world religions at Smith College, a columnist for The Christian Century, and author of several books including Prayer: A History (with Philip Zaleski).

Answering the question “Who would you choose as your patron saint?” may sound like a whimsical or even tongue-in-cheek exercise, but for most Catholics it’s not that at all. At your baptism, you immediately have a saint praying for you. So when I was baptized James 52 years ago, I was given a patron: St. James, one of the Apostles. For my “confirmation name,” a Catholic tradition that involves choosing a saint’s name to follow your middle name (with the saint’s name pronounced by the bishop at your confirmation), I chose Thomas. Why? Because at the time I was a doubting young man. Many years later, at my Jesuit vows, I chose a “vow name.” That one was easy: Peter, another person who, like me, sometimes had a hard time with faith but whom Jesus loved anyway.

Catholics believe that the saints pray for us from their posts in heaven. Many people roll their eyes when you say that because it conjures up images of the saints, hands folded, kneeling on clouds. But here’s how I like to explain it: Most believers ask for prayers from people here on earth (i.e., if someone says in a difficult time, “I’ll pray for you,” most of us are grateful). If people on earth are willing to pray for us, why wouldn’t the saints want to pray for us, too? In Catholic tradition, the saints are both our patrons (they pray for us) as well as our companions (they are our models in the Christian life). So I’m happy to have James, Thomas, and Peter as both patrons and companions. And I look forward to getting a chance to thank them when (or if) I make it to heaven.

James Martin, SJ, is a Jesuit priest, editor-at-large at America magazine and author of many books, including My Life with the Saints. His new book Jesus: A Pilgrimage will be released in March.

As a Roman Catholic who converted as an adult, I’ve chosen a patron saint: Esther, the Old Testament queen who was chosen for her beauty but who conquered with her courage.

As I wrote for the Wall Street Journal, Esther was a bold and audacious woman who risked her life to save the Jewish people. She defended religious liberty and earned a spot of honor in King Xerxes’ court. While Christian women are so often portrayed to the contrary, the Biblical female archetype is strong and courageous. I think of Ruth, Deborah, Rebecca, Mary Magdalene, and Jesus’ own mother, Mary.

The litany of women honored and revered by the Church does not end with the Book of Revelation. The saints offer us countless examples of women who embody the different virtues and facets of Christianity: Teresa of Avila and Joan of Arc are two of my ancient favorites.

The first American-born saint was a woman: Elizabeth Ann Seton. And the Church recently canonized Kateri Tekakwitha, a Native American affectionately referred to by Catholics as the “Lily of the Mohawks.” Kateri was a peacemaker; Mother Ann Seton, a socialite who entertained George Washington and an educator; Teresa of Avila, a doctor of the Church; and Joan of Arc, a warrior.

We need the saints because they help us to see in human ways how each of us can fit into the vast mosaic of our faith. As a woman, I especially cherish the stories of the female saints. And, as I begin to explain the faith to my daughter, the saints will no doubt help me to show her that women have an essential role to play in the Catholic Church.

Ashley E. McGuire is the founder and editor of AltCatholicah.

It’s a tough question to answer, because it’s like being invited to a smorgasbord with hundreds of tasty morsels to choose from, but you’re restricted to just one. I suppose that’s why the Catholic Church speaks of feast days and the communion of saints.

When I was a teenager in the seminary back in the 1950s, it was the Black Robes who did it for me, particularly the Jesuit Saint Isaac Jogues, among the Mohawks in Canada and New York, seeing the other not as “savage,” as the Puritans did, but as brothers to be admired, though it cost him his life. Later, when I was in college, it was Saint Thomas More, with his brilliant repartee, who was unwilling to follow Henry VIII in conscience even when it meant losing his wealth and his life. Then there were many others. Like Mother Anne Seton and Dorothy Day and Mother Teresa and St. Therese of Lisieux, for their courage and wit. And St. Ignatius Loyola and Fr. Hopkins and Matteo Ricci, three Jesuits—like my oldest son—who changed my life. And my namesake, St. Paul, reaching out to the gentiles to bring the Good News. And St. Francis of Assisi (and by extension Pope Francis), for opening their arms to the disenfranchised and marginalized, including prisoners and lepers. And then those who are not recognized as saints, but who have been saintly models for me, including my mentor, Allen Mandelbaum, who taught me to see the stars as Dante saw them. And on …

Paul Mariani is professor of English at Boston College.