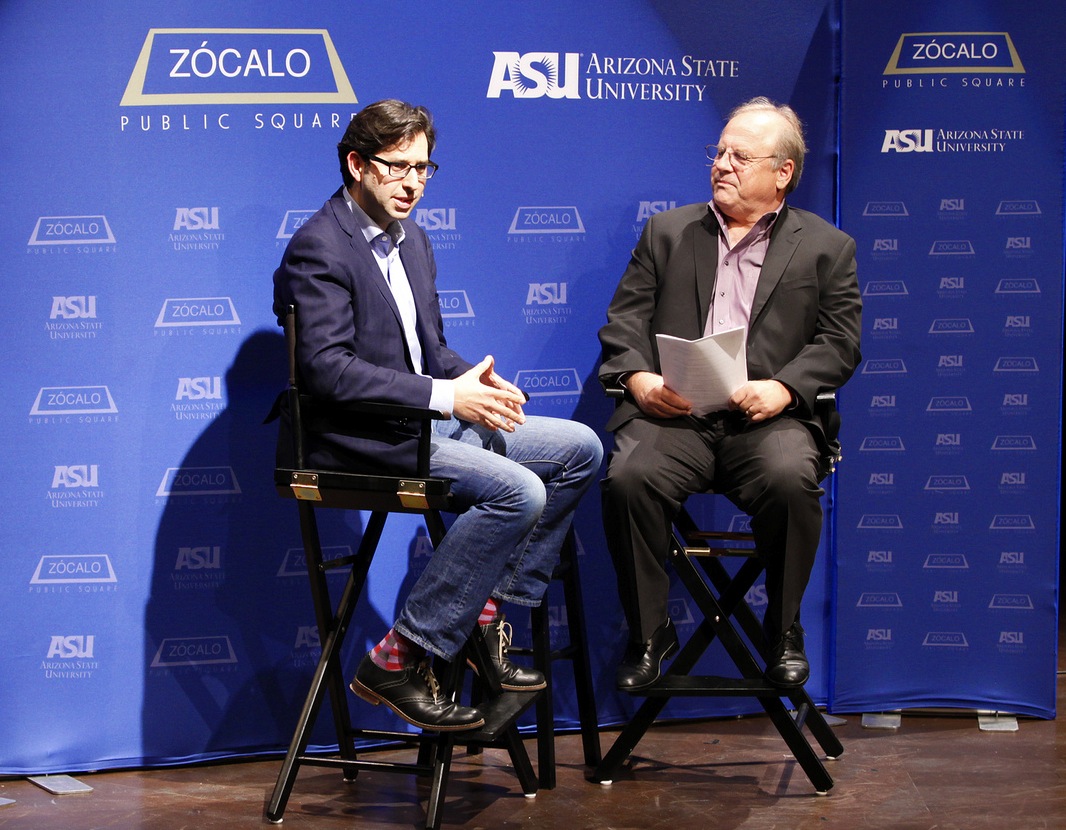 For years, Rupert Murdoch has been “the most influential and important media figure in the English-speaking world,” according to National Public Radio media correspondent David Folkenflik, author of Murdoch’s World: The Last of the Old Media Empires. It’s not just because of the uncommon level of control Murdoch and his family have over his holdings or that those holdings span six continents. It’s also because Murdoch “shapes politics and public perceptions at both a high and a low level.” He controls tabloids and respected national newspapers; he influences public policy and people in powerful positions while reaching mass audiences.

Folkenflik was appearing before a large crowd at The Actors’ Gang in Culver City, talking with moderator Kevin Roderick, publisher of LA Observed. Roderick pointed out that Murdoch, while a member of the elite, also likes to needle the wealthy and powerful. What motivates him to do so?

Folkenflik explained that Murdoch’s father was a respected, even famous, Australian political journalist and a knight. But Murdoch thought his father had been cheated out of some of holdings at the end of his life by the powers that be; Murdoch himself had inherited from him just one newspaper, in Adelaide. Today, Murdoch continues to define himself by who he thinks his enemies are. And in response to his feeling that the establishment is against him, he has created his own establishment, bringing prominent ex-politicians and leaders into his organizations.

People say Murdoch has been bad for journalism, said Roderick. Has he destroyed good journalism?

“I wouldn’t say he uniformly destroys good journalism,” said Folkenflik, pointing to the large number of journalists the Wall Street Journal employs under Murdoch’s watch; the previous ownership could not have sustained that many reporters. He’s improved the Journal in a lot of ways, said Folkenflik. But there are also a number of instances when reporters have felt they’ve been pulled to the right politically by the leadership at the newspaper.

Roderick asked about the News of the World phone hacking scandal that is continuing to play out in British courts. Folkenflik said that the scandal has shown just how integrated the political and media elite became, thanks to Murdoch and his colleagues. It’s become clear that the political and media elite worked in the interest of each other—and lost their connection with the public. Folkenflik said that the trial of former News of the World editor Andy Coulson, who later became Prime Minister David Cameron’s director of communications, was as momentous as it would be if Jay Carney, the White House press secretary, were put on trial for having engaged in some sort of corruption when he was Time magazine’s Washington bureau chief.

In a lecture years ago, Murdoch said that his sense of “public service” is any service he and his company can provide that the public is willing to pay for—within the law. What the hacking scandal shows, says Folkenflik, is that some of his employees lost sight of the within-the-law part.

Murdoch and his top brass can be ruthless, whether or not they’re working within the law. Folkenflik was blacklisted by the Murdoch empire for 15 months after exposing a lie told by Geraldo Rivera. Tim Arango of The New York Times, in response to a story on ratings that irked the empire, found a stint in rehab exposed on a gossip website. And people employed by Fox News public relations took drastic measures to enhance the organization’s public image, setting up sock puppet accounts to comment on any post on any blog—no matter how popular—or even comments on posts that were not in Fox’s favor. This included not just negative postings but neutral ones, too, all rebutted by employees taking on as many as over 100 aliases from equipment that couldn’t be traced back to Fox.

People who work for Murdoch don’t talk about what will happen if he leaves or dies, said Folkenflik; Murdoch doesn’t believe he’ll die, and his employees don’t want to indicate they disagree. But Folkenflik predicts that once Murdoch departs, News Corp will let its newspapers go. They’re losing so much money that one of Murdoch’s top investors described the newspaper business to Folkenflik as an ice cube—“melting fast.” It’ll take just two years or less, post-Murdoch, for the newspaper holdings to change significantly. Murdoch’s children control 40 percent of the voting shares of News Corp, and an ally of theirs controls another 7 percent of the vote. They’ll have to decide what they want to do with that business and with 20th Century Fox.

As to the future of journalism in general after Murdoch—and as to Murdoch’s cumulative effect on the industry—Folkenflik said that while Murdoch’s impact has been indelible, a very different generation of leaders is emerging.

For proof that Murdoch’s fingerprints extend beyond his own newsrooms, Folkenflik pointed to MSNBC emerging in response to Fox News and a former News of the World editor running the New York Daily News. Murdoch has gotten The New York Times to acknowledge—at the very least—that it’s seen as being a left-leaning coastal elite publication. He’s made cable news center on the feverish pitch of opinions rather than on the most convincing facts. In sum, he’s done much more to shape the mainstream media than people recognize, said Folkenflik.

Yet the new leaders in journalism, unlike Murdoch, will not have come up in the newsroom. Rather, said Folkenflik, the “true saviors”—like eBay founder Pierre Omidyar, who’s launching a new news venture, Amazon founder Jeff Bezos, who just bought the Washington Post, and Facebook co-founder Chris Hughes, who owns The New Republic—are going to be billionaires from the digital sphere. 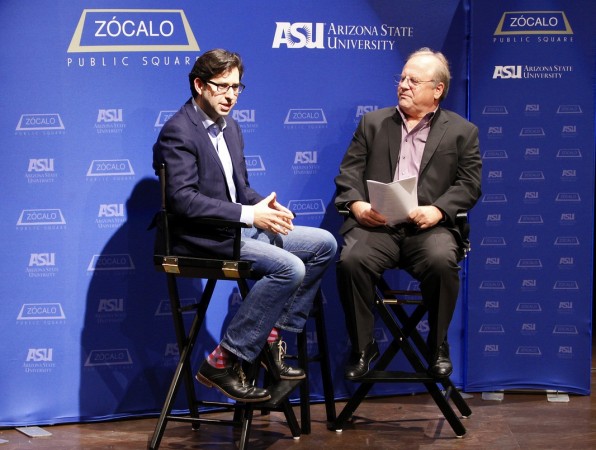 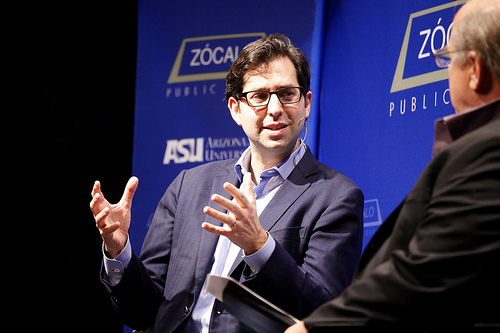 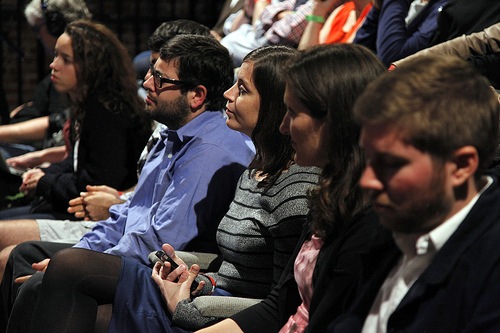 Folkenflik and Roderick addressed a large crowd at The Actors’ Gang 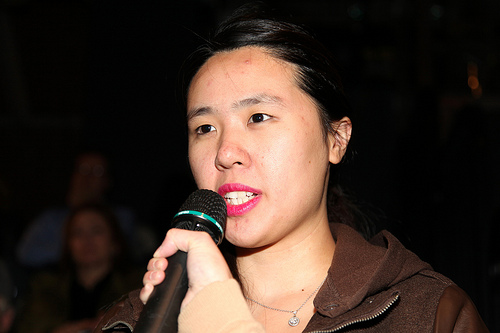 In the question-and-answer session, Folkenflik spoke to the future of News Corp and journalism in general after Murdoch 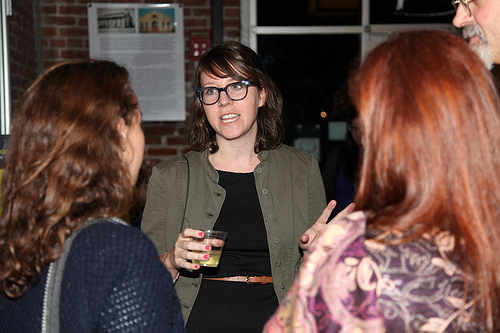 Guests talk over wine at the reception 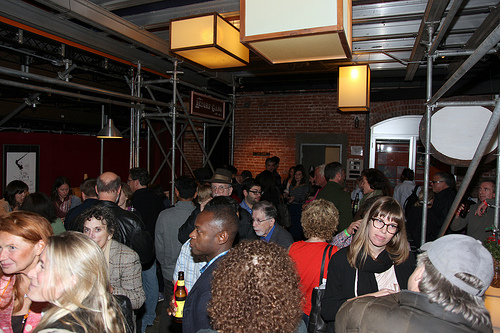