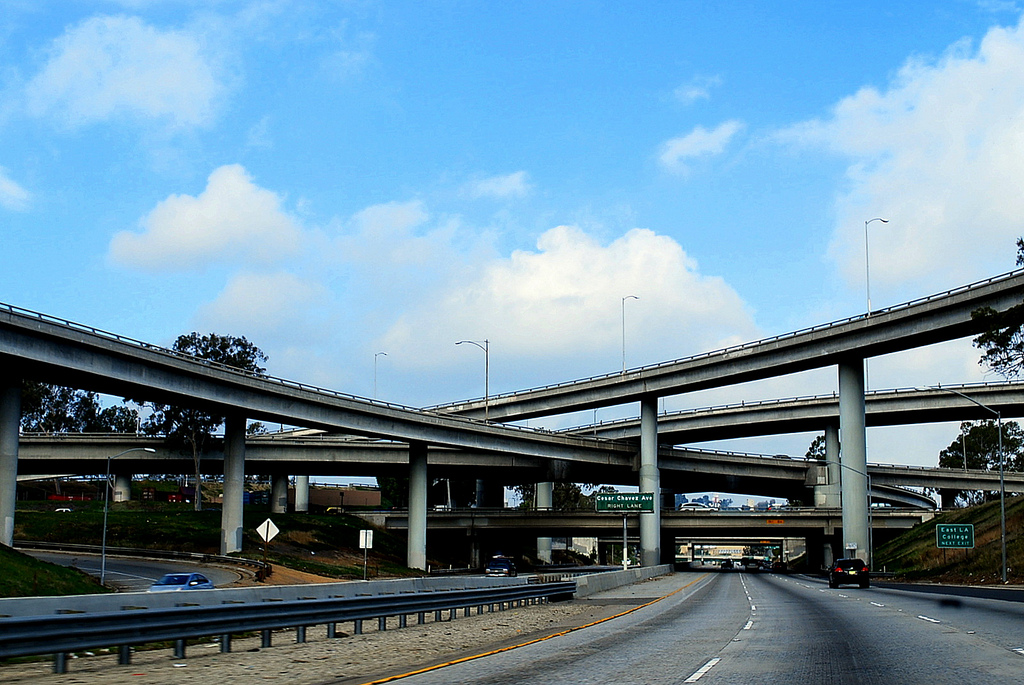 Southern California has approximately 67,000 vehicular lane miles. In other words, we have enough roads to wrap around the earth 2.69 times at the equator. Government officials believe more roadways are needed, but the people often want something else.

Many people say that our embrace of freeways defines Los Angeles, and we should leave it at that. But the contrary is also true: Opposition to freeways has made Southern California what it is today. Angelenos are freeway fighters—and sometimes freeway slayers.

As an urban historian who has done more than a decade of research on this topic, I still find the details astonishing. Thanks to organized opposition and other means, Los Angeles residents were able to erase about 657 miles off the 1958 master plan of freeways, the Southland’s freeway system blueprint, including a freeway that would have gone straight through Beverly Hills. And that’s only part of the story. Every freeway in Los Angeles has inspired community opposition.

Our history of freeway fighting begins with the Arroyo Seco Parkway in the 1930s, largely recognized as the first urban freeway in the Western United States. Construction of the sinuous 6-mile freeway from L.A. to Pasadena had plenty of freeway fighters. Although the parkway respected “environmental” concerns of the era by hugging the natural waterways and maximizing the Arroyo’s scenic wilderness, many residents still did not want it. Frank Balfour, the supervising right-of-way agent responsible for acquiring $500,000 worth of real estate along the route, recalled decades later in an L.A. Times interview: “Don’t let anyone fool you. There was bitter opposition from the owners of private property in South Pasadena. They thought the freeway would wreck their homes and ruin the value of their property.”

But the opponents of the Arroyo Seco freeway lost. Subsequent freeway-fighting efforts, while not always victorious, at least helped to modify original plans. The Century Freeway—the 105—which was designed as the major east-west corridor to Los Angeles International Airport (although it never actually reaches the airport), sparked opposition that was palpable on the Richter scale. People believed the freeway would lower property values, lower environmental health standards, and decrease mobility. This led to a 1972 lawsuit by Ralph and Esther Keith with the legal support of groups like the Center for the Law in the Public Interest, the NAACP, and the Environmental Defense Fund. Defendants contended that Caltrans had failed to comply with many urban planning procedures, notably those laid out in the National Environmental Policy Act (1969) and the California Environmental Quality Act (1970).

Ralph Keith was a senior meteorologist with the local pollution control district, and his wife, Esther, summed up their opposition to the freeway: “I shudder to think what it’s going to do to the environment.” Opposition included state officials. Adriana Gianturco, then the only female director of Caltrans (and also the only non-engineer), opposed the freeway. The California Air Resources Board, the state agency responsible for reducing air pollution from mobile sources, expressed skepticism about the 105’s promised improvement on air quality.

Ultimately, all of the opposition didn’t stop the 105, but it did make it smaller. The Century Freeway, once planned to be a 20-lane monster, was scaled down to 10 lanes. Mass transit—the Metro Green line—was placed in the middle of the freeway. Other environmental safeguards and programs were enacted locally, including the construction of sound walls.

Some parts of L.A. managed to score outright victories in their freeway fights. The 9.5-mile Beverly Hills Freeway was to have run more or less along Santa Monica Boulevard from Vermont Avenue to the San Diego Freeway (the 405). By the early 1960s, right-of-way agents had purchased homes along the proposed route. A Times reporter covering the story claimed that only a miracle could stop construction of the freeway. In 1963, Beverly Hills got its miracle.

Beverly Hills homeowners, following the practices of other freeway fighters, collected 500,000 signatures in a petition drive to oppose freeway plans. Groups like the West Hollywood homeowner association united the community against freeway encroachment. In their protests, the fighters urged governments to pass resolutions not only against the Beverly Hills Freeway but against any Westwide freeway. The crucial bit of support came when the Los Angeles City Council approved a September 1963 motion from Councilman Edmund D. Edelman opposing the freeway. The city of Beverly Hills also led a major lobbying campaign in the state legislature to kill the freeway; the arguments included saving their desirable community and protecting its residents from significant health risks. Beverly Hills won, and the the project was killed.

That was an important battle, but the biggest fight has been on the other side of town, where the freeway fight continues. Since the 1960s, a short 6.1-mile extension of the Long Beach Freeway (710) through Northeast Los Angeles, South Pasadena, and Pasadena has been the subject of numerous administrative proceedings, court actions, and legislative initiatives to halt its construction. The city of South Pasadena won an injunction blocking the project, pending an environmental impact report; it took a quarter century before multiple reports were submitted and approved by the federal highway administration. But once that happened, South Pasadena filed a federal lawsuit, and the project has still yet to go forward. Today, alternatives to the extension, including a tunnel or transit options, are being debated.

For all the concern about that short 710 extension, the biggest threat to community perservation and environmental health may be the proposal to double-deck the entire length of the 710 from the ports of Los Angeles and Long Beach all the way to East Los Angeles. Planners hope to facilitate more than 100,000 diesel truck trips per day, up from 47,000 per day, in addition to tens of thousands of commuter vehicles. This is already one of the most polluted regions in the state, and communities have organized not only to stop the expansion but also to implement safeguards to reduce air pollution and cancer risks.

The freeway fights continue, and the fighters are getting stronger. We know much more about the harm caused by automobiles on the freeways; mobile sources, such as those cars, account for most of our regional air pollution and 94 percent of ambient cancer risk.

We may be in the middle of a historic shift in the freeway fight. Since the 1930s, engineers, not community leaders, have been in charge of designing these massive roads. Freeway fighters have argued that engineers are too cold and impersonal to design such spaces alone.

Communities and public spaces for human interaction should be more important than concrete slabs that connect the city. During the height of highway construction nationally, some 62,000 houses a year were lost to freeway construction. In Los Angeles, those years saw an average of 3,000 residents displaced annually. Losing that many people to freeways breeds resistance to freeways. It still does.