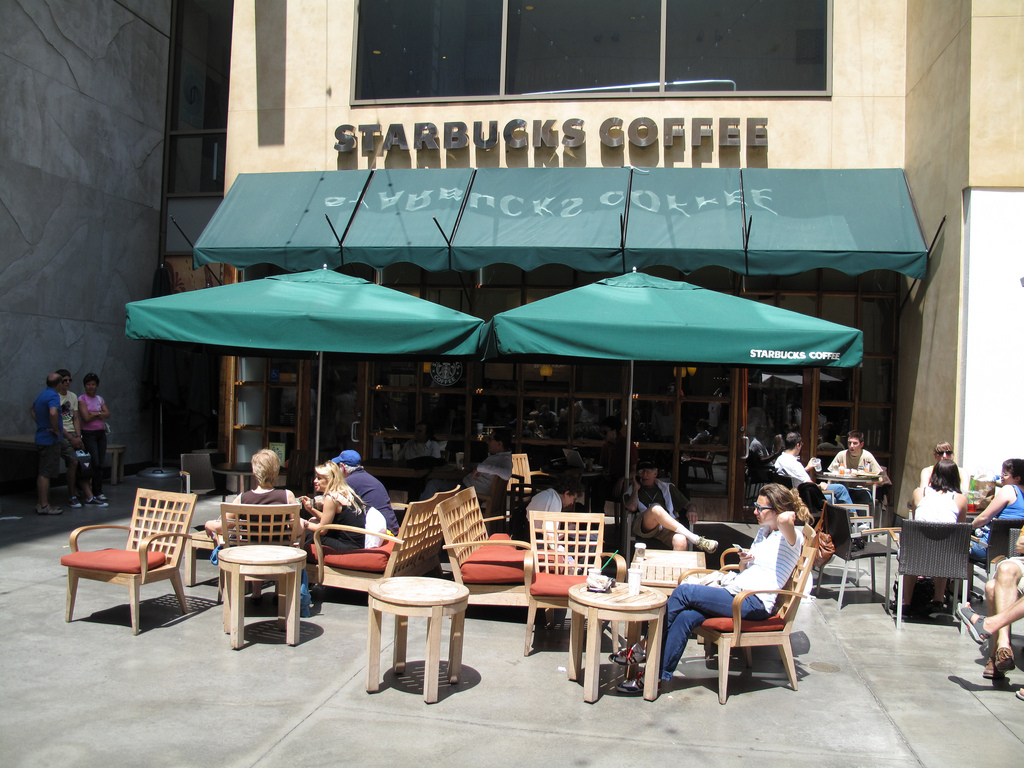 Would your community be better off if your city council met at the local Starbucks?

The answer is almost certainly yes. Compared to people in other states, few Californians talk to their neighbors and work together with them to solve local problems. But the most natural forums to meet with neighbors on community challenges—local meetings of the city council or school boards—aren’t designed to encourage conversation among citizens.

Walk into a council chamber or school board meeting room in your town, and you’ll likely see rows of chairs facing some sort of raised dais or stage, where the council members or board members sit. (Check out images of city council meetings around L.A. County here.) The whole point of the setup is to have you look at the politicians, not your fellow citizens. Essentially, city council chambers are laid out like church, and, as in church, you’re not supposed to talk too much. So it’s not surprising that fewer and fewer Americans bother to go to city council meetings (or, for that matter, to church).

So where do people go? They go to places where they feel comfortable, where they can eat and drink, where tables and chairs are arranged in ways that encourage conversation, In my San Gabriel Valley community, there are so many people spending time sitting and talking at the three local Starbucks that it’s often hard to get a table. Great bars and restaurants always seem full. I don’t think I’ve ever managed to find an empty seat at our local ice cream parlor, Fosselman’s in Alhambra.

Rarely have I had this problem at city council or school board meetings.

Ask yourself if the following sounds like how public meetings are conducted in your community: The big decisions are made in closed session, and when the council or board members face a difficult challenge, they spend most of the time sniping and immersed in personal rivalries. The written agendas handed out are long, but the descriptions of what’s being discussed are too brief and legalistic to be understood. Turnout among citizens is low, unless something has made the public mad, and so many angry people show up that it’s impossible to conduct a useful meeting. And those who come to speak tend to be regulars—many of whom are nutty gadflies. (They prove the municipal wisdom that that there are two kinds of people in the world: those who don’t go to council meetings, and those who go and probably shouldn’t.)

In my experience as a reporter, meaningful conversations between citizens do sometimes take place during meetings, but this talk occurs in corners, just outside the chambers in the hallway, or in common space. I’ve learned a lot from listening to the whispers back and forth in the open space at the very back of the L.A. Council chambers. When I visited the Clovis school board last year, a few parents talked about a problem teacher as they stood in the back right corner, along a wall, out of earshot of the people sitting in front. At Santa Monica’s council meetings, many people don’t go into the council chambers—but instead sit outside and watch on video feeds so they can talk with their fellow citizens.

This is the point in the column when earnest Bay Area types jump on Twitter to tell us that they are developing cool new technologies to help citizens engage their local government online. But precious little thought has been given to how to revitalize local government meetings themselves. To unleash the untapped power of council and school board meetings—to make them about creating conversations—we must flip our priorities and redesign the spaces, so that council chambers and boardrooms are foremost places for people to gather and talk.

What does that look like? Well, it looks like Starbucks. Take out the old fixed benches and seating of your council chamber. Set up tables and chairs and nice couches. Have a bar for serving coffee and healthy snacks and maybe even beer and wine. (I’m a teetotaler, but I don’t know how an elected official could summon the courage to grapple with California cities’ outsized pension problems without a slug of Jim Beam.)

And then take the council or board members off the dais and put them in a corner of the chambers—the way you might position a piano player in a hotel lobby. They’d be miked just loud enough that anyone in the room could hear them, but not so loud as to overwhelm any conversations.

If any council or board dared to try something like this, it would be broadly popular, but would raise all kinds of hackles among people like me—civic types and journalists. Too many of us treat local government as if it were a civic religion, and civic organizations, in the name of defending public access, often fight in court to protect the current, regulated system of church-like public gatherings. So we should loosen up. California is way too interesting to have its public meetings governed by stuffy Yankee mores.

It’s time to make our public meetings as comfortable as your favorite coffee shop. Imagine grabbing a drink, putting your feet up, and tuning out the re-zoning hearing in the corner while you and your neighbor trade gossip, and maybe figure out how to turn that vacant lot into a community garden.