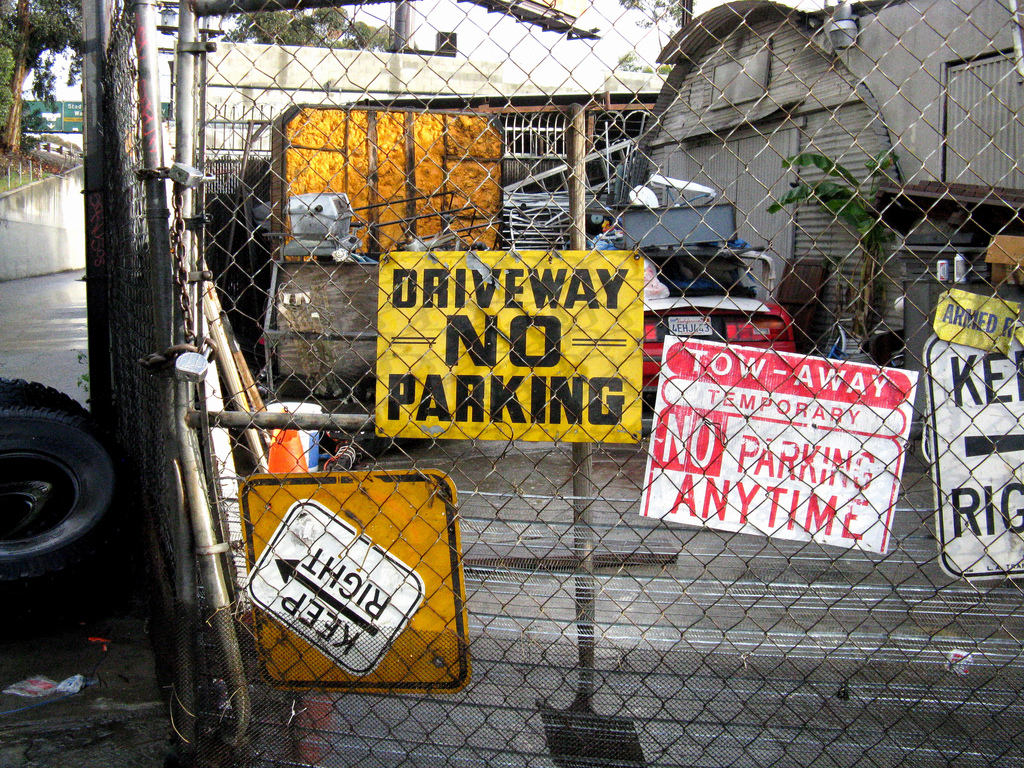 L.A. is a car culture, and parking is always a contested issue. But over the last two weeks in my section of Hollywood, I have seen the parking wars escalate, with all the elements of a dizzying TV drama: wealthy residents, a zealous midnight vigilante, a mystery, a manifesto—and a well-intentioned public institution that got a little out of control.

My neighborhood, Whitley Heights, is a mix of old movie-star mansions and dense apartment buildings. With this hi-lo mix comes a cool urban edge and, sometimes, tension. Many residents display a constant low-level irritation about living so close to the Hollywood Bowl (in summer) and coping with the tourists, employees, and visitors who park in our neighborhood (year-round).

Even without the visitors, it’s a tricky area for parking, with winding, narrow streets and secret staircases into the hill. Fire trucks can get stuck. In most areas, there are no sidewalks and no driveways. Garages are small and built right on the street. Space is at such a premium that a former neighbor of ours who had no parking place once offered us $50,000 to tunnel under our front yard to build himself a garage. (We declined.)

Over the years, some residents have protected their parking with their own hands—by painting the curbs in front of their homes red to keep the cars away. I’m not saying I’ve done this myself, but I can tell you that the Emergency Curb red paint at Home Depot works for this purpose.

One neighbor of ours, who happens to be a contractor, took a short stretch of sidewalk in front of his house, shaved off the curb so his car could roll up onto it, and transformed the sidewalk into his own personal parking place. Then he bought a sign that reads: “Tenant Parking Only.” It worked. The city tows anyone who parks there.

The roots of today’s parking wars can perhaps be traced to the rumors, circulated in our neighborhood a couple years back, that valets were parking cars from restaurants on Hollywood Boulevard on our hill. According to some residents, vans had been seen circling our blocks, releasing teams of tuxedo-clad valets into the darkness. As a result of the valet rumor, our neighborhood’s residents decided to create a preferential parking zone—except for our block. Our curving section of Las Palmas had a lot of apartment buildings and a lot of residents (like me) who believe the streets are public property. Anyone can park in front of our house, to the right and left of our front gate. The curb directly in front of our gate—plus a few feet in each direction—is painted red, to leave us space to get in and out of our house.

All had been quiet on our street—until one fateful morning last week. I walked the dog at 9 p.m., and when I went out the next morning at 6:30 a.m., I was surprised to find that someone had painted over some of the curb—both to the left and right of the gate—and made it gray, thereby gaining a few extra feet for street parkers. A raccoon had walked through the gray paint and left tiny footprints. Gray paint dribbled down the street. Clearly the painter had been in a hurry.

I saw that the mystery painter had covered a lot of ground. There were new stretches of gray all around the neighborhood. Fire lanes were now gray, and everyone who had a front gate to the street lost a little footage to the right and left of their gate. They were now given exactly 36 inches of red.

Our local e-mail group was on fire. Had anyone seen the vigilante painter? Our street is so narrow that with cars now parked in every open spot, elderly people had trouble pulling out of their garages, and apparently several accidents almost occurred. Neighbors suspected neighbors.

Then a manifesto appeared taped to a lamppost. It was written in girly handwriting with brightly colored pens, and it purported to be from the mad curb painter. She (at least we thought it was a she) said her vigilantism was an act for the 99 percent, presumably the renters. Our street’s “1 percent”—homeowners—were entitled, already had garages and a space in front of their garages, and constantly painted away legal parking places. 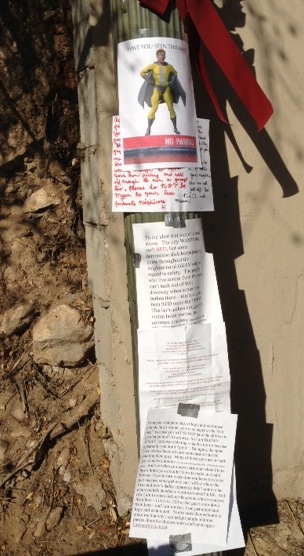 The manifesto drew comments. One neighbor responded, angrily, in an anonymous missive taped below the manifesto. The curb painter offered a rebuttal, plus a cartoon picture of a curb-painting super hero standing astride a red “No Parking” curb with a gray cape and a gray stripe down his front. Above the picture it read: “Have you seen this man?” The angry neighbor gave his name, and printed out an angrier response. The written exchange ran down the length of the lamppost. One neighbor asked my husband and other residents to grab the manifesto so that it could be turned over to the police and checked for fingerprints. Instead, the document disappeared.

Meanwhile, another neighbor claimed to have caught the curb painter on video and posted the 30-second clip on YouTube. The grainy video showed nothing for about 15 seconds. Then a spooky shadow. A man. A dog. A man bending down to the curb. At least it looked like a man … picking up poop off the curb. There was so little in the shadows that your imagination could fill in the blanks with what you wanted to see. A later video showed someone painting by streetlamp. But the dark figure was impossible to identify.

The neighbors got together, called the city, and demanded assistance. LADOT—the city transportation department—came out the next day. I returned home to find a cone in front of my gate, and the entire curb in front of my house a fresh, bright red. My street had lost entire parking places. LADOT had way over-painted: more of our curbs were red than had ever been red before.

“Good thing I didn’t get the red paint,” said my husband, who was ready to paint over the new gray footage to the right and left of our front gate in order to make sure our daily ingress and egress was intact. “Now I will just get gray.”

But the head of our neighborhood association cautioned residents not to repaint the areas gray because we could now be cited by the city for doing so. We were urged to appeal the painting through official channels. Apparently, we were told, changing the color of your curb is a felony.

Then, last night, the mad curb painter struck again—repainting many of the red areas gray.

I have left a note for LADOT taped to the cone in front of my house asking the city to paint the curb gray again.

In the meantime, my husband has quickly gotten used to the new red curb. It’s so much space. It’s so easy to get the trashcans out. It doesn’t require a 17-point turn to get in and out of our garage.

As for me, I’m not holding out for the city to return anytime soon. I’m secretly hoping the masked curb painter will return one night and paint our curb gray again—to take it back to the way it used to be in front of our house. I believe public streets are for the people, even those who want to fight over parking and paint colors.