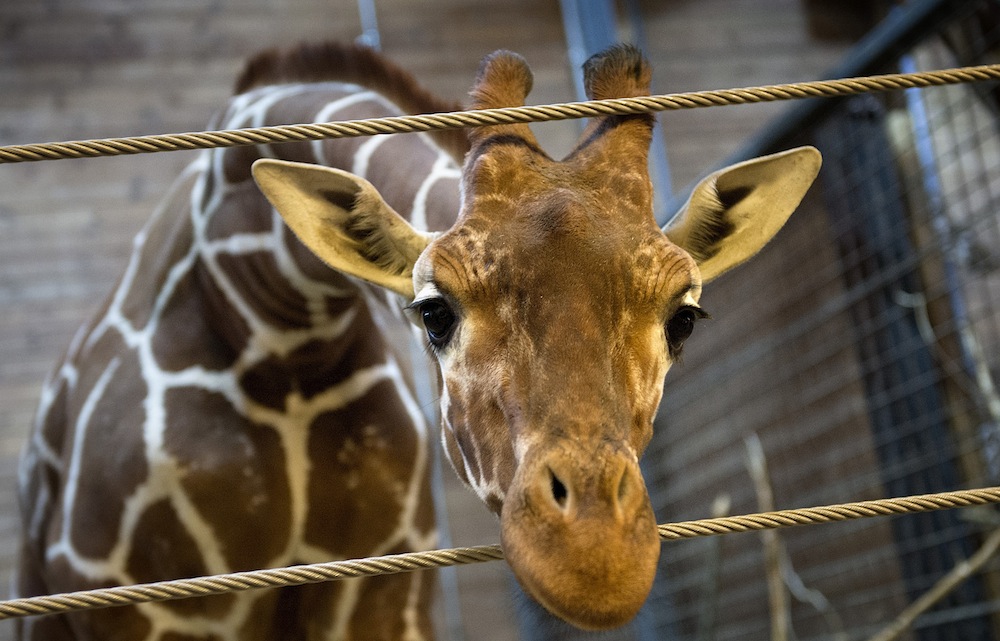 A few years ago, I attended a biannual convention of zoo nutritionists in Oklahoma for the book I was writing. Hanging out one night at the hotel bar with a group from around the United States, we got to talking about a practice in some European zoos that sounded shocking. It was called carcass-feeding, and like most Americans, I had never heard of it. This was long before the story of Marius, the giraffe fed to lions last Sunday at the Copenhagen Zoo, put carcass-feeding in the national headlines.

“Let me get this straight,” I said in the bar. “It means taking a healthy animal from one part of the zoo, euthanizing it, and feeding it to a carnivore in another part of the zoo?”

The nutritionists nodded and explained: In the wild, lions don’t encounter tidy portions of boneless, ground meat lying conveniently under the bushes. At dinnertime, meat-eaters like tigers, hyenas, and cheetahs don’t find stainless steel bowls filled with ready-to-eat kibble. Eating in the wild is bloody and hard, and carnivores have to work at it. Their fangs and digestive systems have evolved to deal with hair, bones, and other obstacles. Activities like gnawing and licking occupy the animals physically, but also have psychological and social value. Some carnivores instinctively hide and hoard meat and return to eat it later. Others observe strict hierarchies of who in the group gets to eat first. In these ways, eating behaviors play an important role in the animals’ mental health.

In many European zoos, my companions explained, carnivores are fed carcasses to promote these healthy, normal behaviors; zoo staff have found that carcass-fed carnivores are calmer than those fed processed food. So instead of being served, say, some minced beef, as it might in a U.S. zoo, a Tasmanian devil might be given a piece of a kangaroo. Or a cheetah might get a gazelle instead of a ground-chicken patty. In Europe, these prey animals often come from other parts of the zoo—recycled, if you will, as food for the carnivores.

While animal nutritionists in the U.S. do enrich animals’ eating experiences with puzzles and games, they tend to feed their carnivores processed meat from an outside source. The difference in this approach roughly divides American and British zoos from their counterparts in Denmark, the Netherlands, Germany, and elsewhere in Europe.

Carcass-feeding isn’t the sort of thing that most zoos feature on the welcome page of their websites. But it’s not exactly a secret, either. On a recent visit to a zoo in the Netherlands, I saw picked-over remains in the enclosure of some European wolves. A placard nearby explained the drill.

Even knowing about the cultural differences in feeding, I, like many people around the world, have been following—with interest, dread, horror, and ultimately sorrow—the story of Marius the giraffe. It was impossible not to feel sad, confused, and even outraged on Marius’ behalf. Like others, I wondered why the zoo chose to euthanize Marius instead of sending him to one of several facilities that offered to take him in. Or why Copenhagen seemed so heartless and, frankly, in-your-face about their process. (In the name of education, the zoo invited the public to a post-euthanasia necropsy—an animal autopsy—of Marius. And they made no attempt to disguise the telltale giraffe-hide markings when his remains were given to the lions.)

Eating is not the only thing that European zoos encourage their animals to do in a natural way. Zoo visitors might see animals courting and mating. Giving birth and nursing young. Bonding with infants in a mixed-age community. Living in a social group with extended family. These are all “natural” behaviors that are part of many animals’ “normal” lives in the wild. While they do have strategic breeding programs, European zoos place importance on giving animals the unrestrained opportunity to experience these life stages and cycles. The downside of this approach, however, is over-population. Allowed to breed freely, animals produce offspring that zoos might not have room to house.

Most American and British zoos, by contrast, carefully manage the reproduction of their animals, in part through contraception. When mature females are housed with males, they are usually placed on birth control (pills, shots, or implants). Although some males are castrated, as with humans, long-term contraception is usually aimed at the females. This allows for it to be reversed if the animals are to be bred. A zoo that’s cautious about how and when animals get pregnant may have fewer individuals living in smaller, less biologically “natural” groupings. But there’s no over-population problem.

American and European zoos also differ in how they treat one particular animal: human beings. As we’ve seen, the Danish approach is rather dismissive of sentimentality. With science education as the stated goal, children (with parental permission) were invited to observe Marius’s necropsy. Some parents might prefer the G-rated approach of American zoos, which generally keep mating and death offstage. But other zoo visitors could make a case for the Danish lack of hand-holding.

So we have two approaches to eating and sex in zoos—both created by people who care deeply about the animals in their care. There is, of course, another philosophy—that zoos shouldn’t exist at all, that captivity itself is cruel. Some of the outcry over Marius certainly comes from that perspective. And fair enough. But if you do think zoos have a role to play in preserving species—especially with wild habitats disappearing at a rapid rate—the high-profile and sad case of Marius offers an opportunity to talk about which approach is best for animals in captivity and in particular, what constitutes, emotionally and socially, a “good life.”