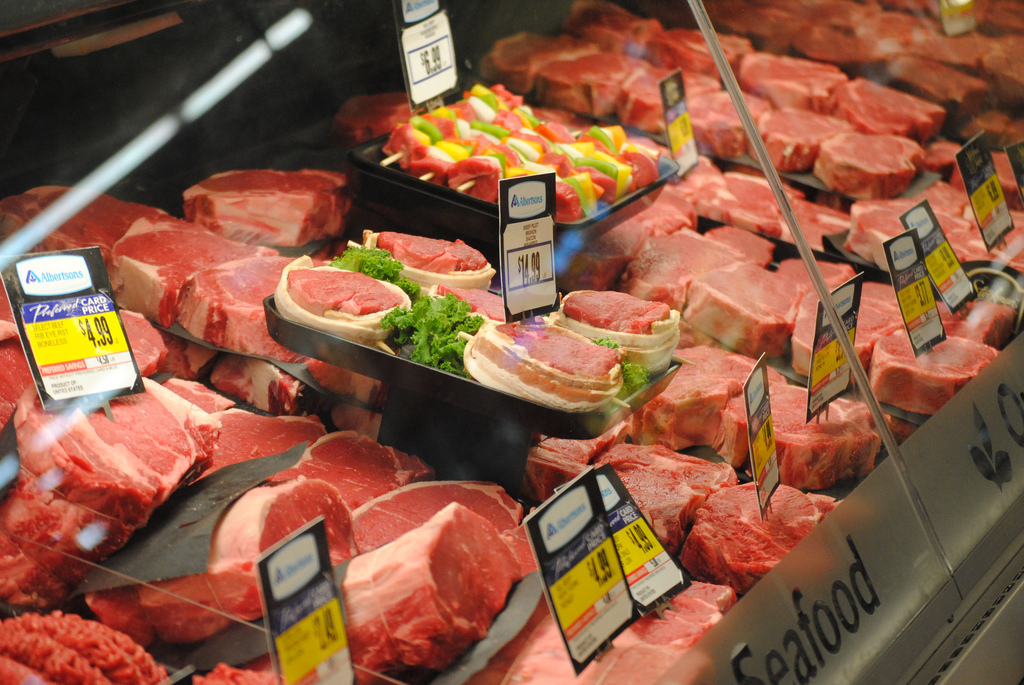 It’s what we feed our families

You have to buy in

Visit your local supermarket and an array of packages of shrink-wrapped meat glints from refrigerated cases. Meat in America is typically cheap and plentiful, delivered to your plate through an efficient, well-organized process. But as you tuck into your ribeye, what should you know about the protein you’re about to eat? In advance of the Zócalo event, “Is Factory Farming Destroying Rural America?”, we asked five carnivores what one fact they would want to share with Americans about the meat on their dinner tables.

Urban demand—what’s that got to do with Tyson and the price of poultry?

City folks don’t grow their own food. They rely on farmers, whose numbers drop when urban populations soar. In 1860, for example, about 60 percent of Americans were farmers; 25 percent lived in cities. By 1920, however, fewer than 30 percent grew food for the 50 percent that lived in town. Today, nearly 90 percent of us are urbanites; farmers account for less than 2 percent of the population.

The history of meat in America is the history of farmers and meatpackers struggling to close the gap between farmers’ output and urban demand. They did so by devising technologies and techniques that required little land (urban growth drove up land prices) or labor (farmers faced chronic labor shortages). By the 1950s, those tools included livestock confinement and the use of antibiotics, as well as vertical integration that coordinated the production and transfer of livestock and meat from farm to factory to grocer to consumer. Meatpackers constantly reinvented slaughter and processing, and integrated those tasks with livestock production, in order to keep meat prices low for urban consumers.

These days, many people criticize the American way of meat. It’s true that industrial livestock production often pollutes air, soil, and water. It relies on a factory-like form of organization. True, too, that packing plants move at rapid speeds and rely on unskilled labor. But the entire system, from farm to slaughterhouse to food processing plant, is designed to ensure that a handful of farmers can feed an urban majority. It’s the American way of meat.

Maureen Ogle is a historian and the author of four books, including In Meat We Trust: An Unexpected History of Carnivore America.

There’s an oft-used statistic from the nonprofit advocacy group Farm Forward that states that 99 percent of all farmed animals raised and slaughtered in America are factory farmed. That statistic may have fluctuated somewhat with the slow rise in demand for the other 1 percent: meat that is often labeled “organic,” “sustainable,” “free-range,” “natural,” “local,” or something similar. Recently, I’ve learned it’s not as easy as one might think to distinguish the 1 percent from the 99 percent when it comes to meat.

Five years ago, I landed a job in a small butcher shop in Portland, Oregon, that specialized in finding farmers who raised that 1 percent of meat.  Each week, we ordered whole pastured pigs and sides of grass-fed beef from those farmers and sold the resulting meat to our customers. Each week, we also ordered 150 pounds of whole, boneless, skinless pork shoulder for sausage. Our farmer, who always brought photographs of her happy pigs rolling around in the mud, told us, if you need more, just call.

We never thought to question the seemingly endless supply until the day the pork shoulders we received were double the size of what we usually received, more pale and watery. We called the local slaughterhouse where the farmer’s whole pigs were processed. This didn’t look like that 1 percent meat we usually get, we said. It looked like the 99 percent. The slaughterhouse told us it was.

It turns out there’s this thing called co-packing. Co-packing means that Holly Hobby can start a pig farm, and she can sell pork to butcher shops like ours, or farmers markets, or your front door, with photographs of happy pigs in pastoral fields of green. But if one day she has too many customers and not enough pigs, it’s perfectly legal to buy other pigs or parts of pigs from someone else, even Tyson’s Big Factory Pig Farm in the Sky, and sell that meat under Holly Hobby’s Farm name. And Holly is not required by the USDA to disclose this information.

Now, when I buy meat directly from a farmer, I ask one question: “Can you get me 150 pounds of boneless, skinless pork shoulder by next week?”

If they don’t miss a beat, I move on.  If they laugh and tell me to call them next season, I know that farmer is for me.

Camas Davis founded the Portland Meat Collective, a one-of-a-kind meat school and culinary resource in Portland, Oregon, and has written for National Geographic Adventure, Saveur, and other publications.

It’s what we feed our families

The meat on American plates is the safest, most varied, most abundant, and most affordable in the world and is produced by an industry that operates under the most intensive regulatory and inspection regime in America.

Meat and poultry plants and their products are inspected every day. Plants that handle live animals must have inspectors, including veterinarians present continuously to enforce food safety, labeling, and animal welfare regulations.  While foodborne illnesses associated with meat and poultry were once common, today 99.99 percent of the meat and poultry in the U.S. is consumed without illness.

Our meat isn’t just safe—it’s affordable. The average U.S. household spends just 5.7 percent of its money on food consumed at home, which is the lowest in the world. Americans are able to select from thousands of different meat products to fit each person’s tastes: conventional, minimally processed, natural, organic, free range, fresh, or processed. There are so many choices, you could enjoy a different product every day for your entire life with no repeat.

And the meat on your dinner table has had significant benefits to our communities and the U.S. economy. The meat industry employs nearly half a million people directly and indirectly adds another 6 million jobs to the U.S. economy through the transportation and sale of our products. In 2012, the industry generated $894 billion in economic activity and $98 billion in taxes that create schools, roads, and other key services.

Meat and poultry is delivered to dinner tables by people who are entrepreneurs, innovators, animal lovers, and scientists who care about the food they produce because it’s the same food they feed their families.

Janet Riley is the senior vice president of public affairs for the American Meat Institute.

You have to buy in

In my book Putting Meat on the American Table, I argue that America has always been, and likely will be, a meat-eating nation. This cultural practice is deeply rooted in how we are brought up, our traditions, and our beliefs. However, as they have in the past, Americans can change the kind of meat that is consumed in our society with their choices in the marketplace. I believe it will be consumer demand, more than muckraking exposés or government regulation, that affects the choices made by the companies producing meat. Firms are in business to make money, and if they find out that providing different types of meat can generate profits, they will have an incentive to do so.

In our modern economy, changes in our meat supply will not come from the behemoths that provide us with cheap burger meat and chickens, as there are fortunes to be made by doing so. Instead, change is coming and will continue to come at the margins, from small companies able to find markets for special kinds of meat—grass-fed, organic, hormone-free, etc. It is now relatively easy for consumers to locate these companies and buy from them, either through specialty grocery stores (Trader Joe’s, Whole Foods) or directly from producers via Federal Express and other firms that provide reliable refrigerated transport. These are highly profitable niche markets, and the success of some firms with those specialized meat products attracts competitors. That drives down prices and diversifies our choices.

So, if you want to change the meat that is consumed in our world, the place to start is with what you choose to buy to eat at home.

Roger Horowitz is director of the Center for the History of Business, Technology, and Society at the Hagley Library and has published widely on American food industries. His current book project, Kosher USA: A Journey Through its History, will be published by Columbia University Press.

Despite The Jungle, Fast Food Nation, Slaughterhouse Blues, and other detailed exposes of miserable working conditions in packinghouses and factory farms, the public is more concerned about the welfare of farmed animals than the welfare of those who turn them into meat for our tables. In a 2010 national survey by Context Marketing, 69 percent of those who responded said they would willingly pay more for “ethically produced” food. When asked what they meant by “ethical food,” 90 percent identified three main qualities: protects the environment, meets high quality and safety standards, and treats animals humanely.  Working conditions and wages of food-chain workers were not among the criteria.

And yet, food-chain workers face hazardous working conditions, illegal company tactics to prevent union organizing, failure to report injuries, and termination of those who file claims, according to Human Rights Watch’s 2004 report Blood, Sweat, and Fear: Workers’ Rights in U.S. Meat and Poultry Plants. A 2012 report, The Hands that Feed Us, found that one-third of food chain workers—those who plant, harvest, process, pack, transport, prepare, serve, and sell food—suffer from food insecurity.

The meat and poultry industry is responding to public concerns for the welfare of farmed animals. If public outcry over the plight of meat and poultry workers were as loud as it has been over that of farm animals, companies would hear, and they would respond.

Don Stull is professor of anthropology at the University of Kansas and co-author of Slaughterhouse Blues: The Meat and Poultry Industry of North America. He is also treasurer of the Organization for Competitive Markets, whose mission is to work for transparent, fair, and truly competitive agricultural and food markets.