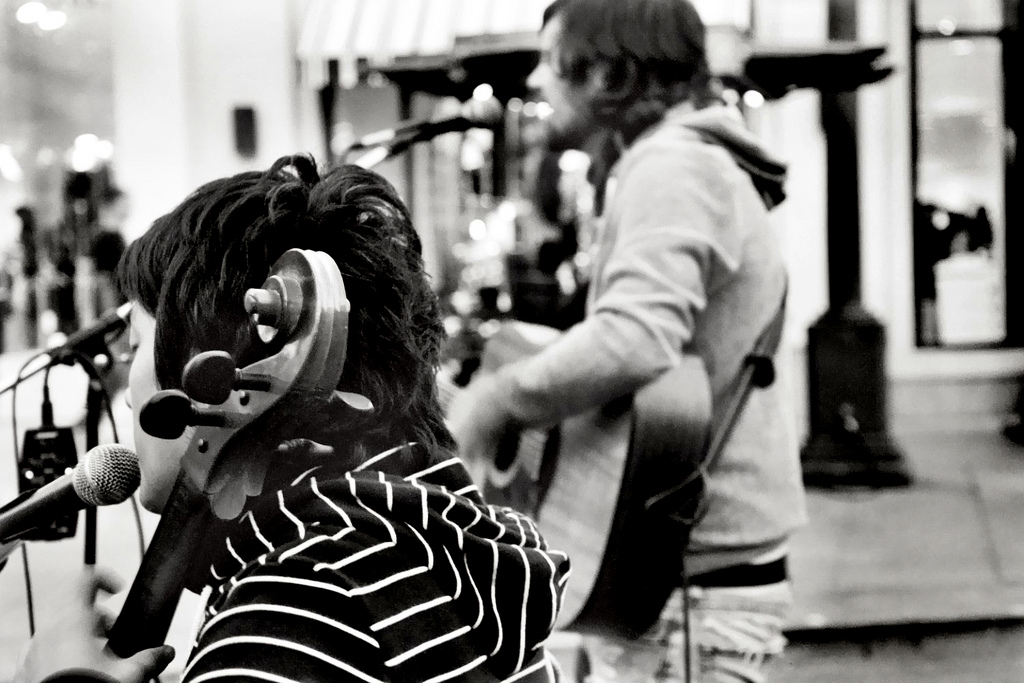 We made the decision in December of 2005.

The two of us had just returned to Los Angeles from a 10-week nationwide tour in support of the debut album that we released independently to showcase our minimalist sound. (We describe it as “cello rock.” Others may call it folk rock.) Boxes full of CDs from our ambitious first pressing were stacked in the corner of our rehearsal space. We sat there brainstorming ways to sell them in an effort to fund our next album. Before we left for our tour, Ed was working as a marketing manager for an independent record label and Ken was doing HTML layout design for a dot-com. We quit those jobs to go on our cross-country adventure with no intention of getting them back.

Ed went to get lunch–and some advice—from his former boss at the label in Santa Monica. Ed returned with an idea: street performing. At first it seemed a little crazy, and we certainly didn’t think that we would be able to support ourselves as buskers, people who perform in public places for donations. But the more we talked about it, the more interesting it became. The Third Street Promenade in Santa Monica wasn’t Carnegie Hall, but it would be a place we could play our music and hopefully make some money doing it.

The first week of January, we sauntered into the Santa Monica courthouse with our passport photos and $75 in hand. The permitting system for busking on the promenade is fairly simple: All you need are photos, a valid driver’s license, and your Social Security number. The city wants to keep track of who is playing at the promenade, and a promenade manager walks the street on the even hours to check permits.

The following Saturday we drove the 13 miles from the apartment we shared in Koreatown to Santa Monica. We parked our Honda Element four blocks away from the promenade and loaded our two carts with a deep cycle marine battery and a power inverter (because you can’t plug your system into a wall outside), two massive speakers, four boxes of CDs, and leftover T-shirts from the tour. With cello and guitar slung across our backs, we began the first of what would become countless treks down Colorado Boulevard to the Promenade.

We picked the first spot that looked available, not even noticing the trash-can-playing drummer who was planning to set up right next to us. The designated performance areas on the Promenade are only 40 feet apart from one another. When you set up an acoustic guitar and a cello right next to Animal, the maniacal percussionist from the Muppets, you are bound to have a bad set.

We soon learned that the most important elements of street performing for a musician are a quiet location and a large amount of foot traffic. In order to prevent any one performer from monopolizing a particular spot, the Promenade requires that you change positions every two hours on the even hours—i.e., 2 p.m., 4 p.m., and so on. The seasoned buskers would finish their noon set at 2 p.m. and head over to a different spot right away to wait for the 4 p.m. slot. You couldn’t say you’ve got “dibs” on any spot unless you were physically standing there with your gear … or wanted to get into a fight. On any given Saturday you could wait up to four hours to play at the most desirable location. We quickly discovered what would become the majority of our busking experience: waiting.

By our first summer, we had learned the ropes of street performing and were frequenting the Promenade up to five days a week. Any more than that and we might have gone crazy. We had two 45-minute sets of material at this point and would cycle through them during the day. This meant a lot of repetition. We were definitely getting our chops up and had to learn some covers to spice up the set.

But we were thrilled to have discovered a way to support ourselves with art. The actual amount we earned on any given day varied—as little as $30 and as much as $1,000. If it rained we would have to pack up our stuff as quickly as possible and accept a loss for that day. Our persistence averaged out our income to a fairly consistent amount. We were paying ourselves $300 a week and putting the rest in the bank account. It wasn’t a lot of money to live off of, but we were used to scraping by. Armed with savings and practice, we were able to record our second album with veteran rock producer Duane Baron at Banyan Tree Studios in Hollywood.

The Promenade had its dark days, of course. We were the literal new kids on the block, and the other performers did not always share in the joy of the large crowds we were drawing and the money changing hands. One day, we were performing near a clown making misshapen balloon animals for children. Apparently clowns don’t like folk music. In the middle of our set he angrily approached us screaming, “You suck! Go home!” He then proceeded to spit in Ed’s direction without regard for the large crowd watching us perform. We stopped mid-song to talk to the clown, who only backed down when the crowd began jeering for him to leave us alone. Once we learned how to ignore the haters and stopped caring that most people were there to shop rather than listen to us, we quickly learned that busking opened up incredible opportunities.

One Saturday afternoon, we were finishing our signature upbeat song, “Analog Girl” when we noticed a familiar-looking man watching us. Dustin Hoffman approached us and introduced his wife and child. He told us how interesting our sound was and asked if we had seen the movie Once about Irish street performers. He urged us to go see it. We did and were inspired.

In 2009, we received an e-mail from the Shirai family, who had been organizing tours to California for Japanese nationals. Mrs. Shirai had seen us at the Promenade in 2006 and purchased 20 of our CDs, which she brought back to give to friends. The family expressed interest in setting up a month-long tour of Japan, offering to cover our travel and housing expenses while booking shows for us throughout the main island.

We ended up completing two successful tours of Japan in 2010 and 2011. The last show of our 2011 tour was the day of the Great Honshu earthquake. Needless to say, we canceled that show and spent the day with our host family about 50 miles from the Daiichi power plant in Fukushima. We huddled around the TV watching footage of the tsunami and the nuclear power plant burning and running outside after each aftershock. When we got home, we organized fundraisers to bring the Shirais to the States. They came here in the summer of 2011 and stayed as long as their visas would allow. It was too complicated for them to immigrate here, so they ended up settling in New Zealand. In 2012, they booked us for a three-week tour down there.

During the 2009 recession, we started to notice that our CD sales were slowing down, along with the economy. We had been performing at the Promenade for years and had sold our albums to most of the locals who were interested in our style of music. Maybe we hit market saturation. A lawyer friend of ours tipped us off to a possible alternative: Downtown Disney in Anaheim. After calling and e-mailing the Disney talent manager almost daily for six months, we were finally called in for an audition. We got the gig.

When we first started, we just sold CDs and were not paid for our time. After three years of playing in Anaheim we encountered a similar problem to the promenade: Our CD sales were in a slump. Working for free at a company as large as Disney started to seem unfair to us, so we e-mailed management and told them that November 2013 would be our last month playing the Downtown Disney district. Almost immediately, we heard back: They asked us to reconsider and told us they would look for some money in the budget to pay us. Now we are independent contractors for Disney and invoice them for each gig at a set price of $400 per show. It’s the closest thing to a steady job in the world of busking—and we still perform there to this day.

It is harder and harder to get noticed these days. Anybody with a laptop can have a band, and the market is crowded with acts. Music labels seem to want to invest less in developing artists, and music studios around L.A. are closing. So busking is one of the few outside-the-box avenues available to make music careers possible. For anyone considering taking up the challenge of busking for a living, we would encourage you wholeheartedly.