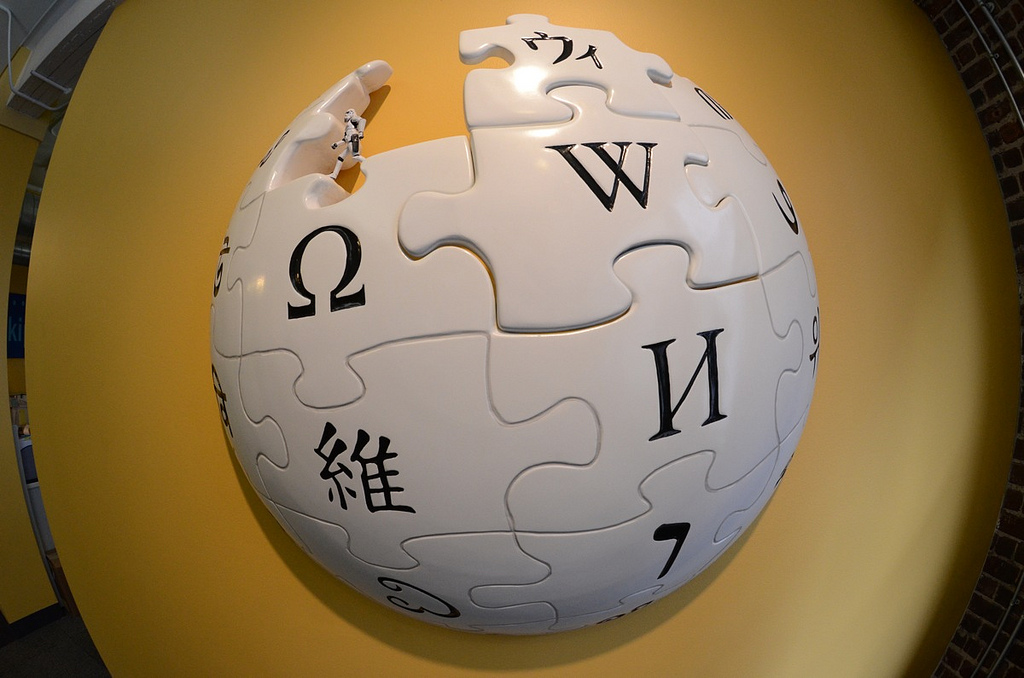 Let me tell you a story about Ron. Well, his name isn’t Ron. But everything else in this story is true.

Ron and I arrived at a social function. Ron assigned himself to the snack table. A few bites in, a crumb of chip buckled under the guacamole it supported, tumbled out of his mouth, and—after ricocheting off his teeth and through his formidable beard—landed squarely back in the middle of the bowl of guacamole. Ron didn’t glance around to see who noticed—what would be the point? He had a job to do. He reached for another chip.

Laugh, go ahead. Cringe, even. But before you judge, let me tell you a little more about Ron.

Ron is a Wikipedian. He writes and improves Wikipedia articles.

When your Congressman’s staffer tried to whitewash a Wikipedia entry ahead of the election, erasing well-cited coverage of an illegal campaign contribution, Ron—or someone like him—noticed, undid the change, and shooed that staffer away. It probably all happened while you were watching a 30 Rock rerun.

And when your daughter clicked Google’s first link about the Pythagorean theorem, arrived at Wikipedia, and finally “got” how it worked—a Wikipedian wrote that article. It might not have been Ron—math isn’t really his thing—but he probably fixed a couple typos.

Why am I telling you this? Because—as much as he drives me nuts—I need Ron.

I’m another one of Wikipedia’s 100,000 volunteers. I’ve been at it since 2006. I’m kinda proud of my work, which is a little different from Ron’s—we have different interests, different skills. Like Ron, I do it for free. In the daytime, I work on related stuff for pay. It’s not a bad life.

I like to think I write some pretty good Wikipedia articles, and if you take the time to look at them, I hope you’ll agree. But honestly, I can’t be bothered with all the details. They drive me crazy! I can take on a Congressional staffer once in a while, but have you looked? There are a lot of folks in Congress! Just beating them back to create a little space is a full-time job. If Ron isn’t there to keep them honest, where would I put my article about the Columbia River?

I mean, of course I could write it—but where would it go? Without Ron, would Wikipedia even exist?

If you care how information moves—and whether your grandchildren get an Internet that welcomes their active, creative engagement—you may already know that Wikipedia is the only top website that shares that passion, front and center, ahead of anything like a quarterly earnings report, or a buyout by a Fortune 500 company. So if you care about the Internet’s future, please listen closely.

For the last year, the Wikimedia Foundation—the nonprofit organization that supports Wikipedia in hundreds of language editions—has been seeking a new executive director.

Sue Gardner has held the post since 2007, but she announced her resignation in March 2013. Her successor has yet to be named.

In 2007, Wikipedia’s biggest claim to fame was that a liberal arts college in Vermont had banned its use by students; today, professors around the world are directing their students to contribute to, and learn from, Wikipedia. That year, for the first time, Wikipedia earned a spot among the top 10 most viewed websites, but it had not yet overtaken sites like MySpace or MSN.com.

Sue’s story isn’t just any Internet success story. Among the world’s top websites, Wikipedia alone is driven by a worldwide community of volunteers and stewarded by a nonprofit organization that shares their vision for a world in which every human can freely share all knowledge. Sure, Sue has overseen a massive increase in the organization’s annual budget. But that isn’t her big accomplishment. The hard part hasn’t been earning the money. It’s been staying true to Wikipedia’s vision and values.

Why has the Wikimedia Foundation has struggled to find a suitable successor for Sue?

In case you haven’t been paying attention, Ron and I—and all the people who make Wikipedia’s content and defend its values—we’re a pain in the ass! We have strong opinions. We love to hear ourselves talk. And as long as there’s something to be fixed on the Internet … well … we’re not quite ready to move on to something else.

In 2001, news articles told us the dream of an Internet that was “of the people and by the people” was over. A widely syndicated Associated Press story had this headline in the Lewiston Morning Tribune: “Internet comes of age … and goes commercial”! Oddly enough, that’s the year Wikipedia was founded. And today, thanks to one and only one top website—Wikipedia—the dream of an Internet that is not entirely dominated by commercial interests is very much alive.

And that dream, it’s an important one!

While you ponder what data the NSA, or Facebook, or your insurance agent, is collecting … and wondering why, or whom they might share it with … don’t worry about Wikipedia. Because Ron doesn’t care! He doesn’t want to know who you are. Wikipedia doesn’t require its readers or its 100,000 volunteer contributors to reveal a shred of personal information—let alone store or sell that information.

And in transparency, Wikipedia sets a high standard—it truly has no equal among large publications. When its articles change—even when its editorial policies change, and when its software changes—the reasons are extensively discussed in open forums, and preserved for all to see.

Oh yeah, and let’s not forget—there are the 4 million articles you won’t find anywhere else—or at least, you wouldn’t find elsewhere if Wikipedia didn’t actively encourage other sites to copy, paste, rework, translate, improve, and republish its work in pursuit of that shared vision.

I could go on, but let’s get back to the main point:

It matters who leads the Wikimedia Foundation.

And it matters how she leads.

We argue about the most ridiculous things. But dammit, you’re relying on us almost every time you do a Google search. Your doctor relies on our work more than she relies on any other publication. (Look it up. I’m not kidding.)

Whoever fills Sue’s shoes needs to “get” us. The writers, the organizers, the programmers.

She needs to know how to filter out the bullhockey we will surely send her way, and see her way through to the wisdom we possess. And turn it into something great. That helps us remember we are in this together.

When the Internet starts to look corporate, and scary, and … well … rigged, there’s Wikipedia.

It’s an important part of the future.

If all goes well, Wikipedia’s healthy, thriving, productive, and inclusive community of volunteers will continue to make it ever more accurate, ever more comprehensive, and ever more accessible to new readers and new contributors.

But for that to work out right, we’re going to need you.

And when we screw up, we need you to let us know.

Set aside an hour or so, and poke around Wikipedia. Not just the articles this time—get a feel for how it works. What’s that “Talk” tab all about, or “View history”? You’ll never know if you don’t look. And you might just find those links tell you more than the article they’re connected to—who created it, what they’ve been arguing about. Maybe you’ll notice some really good work on an article you care about. Maybe you’ll even figure out how to say “thanks.” If you do, you’ll make a Wikipedian’s day.

And if you can’t make any sense of what you’re looking at … try asking the bearded fellow with his hand in the guacamole.