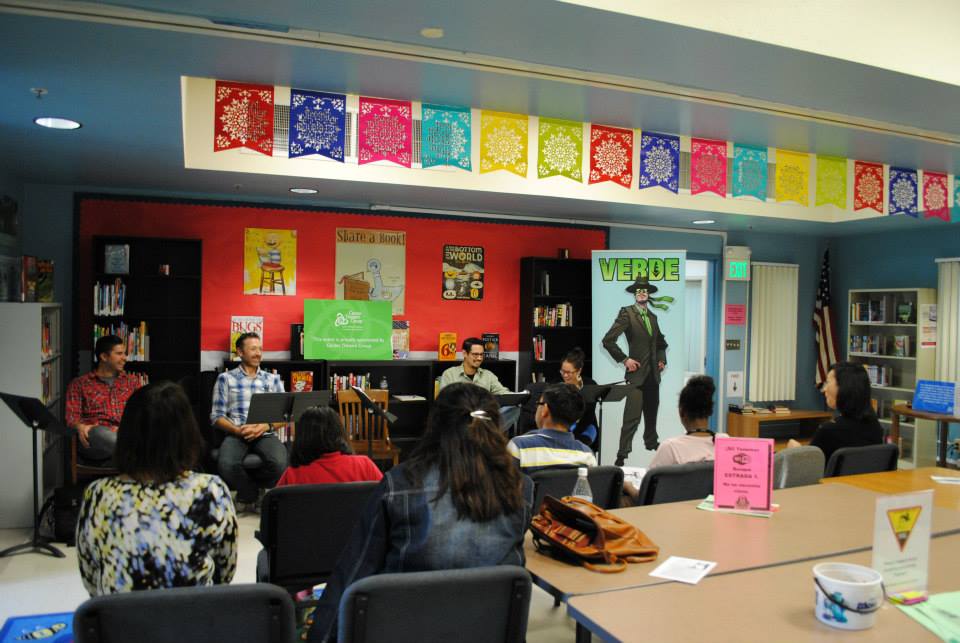 My childhood revolved around two things: television and superheroes. I always looked forward to coming home from school to watch reruns of Gilligan’s Island, The Dick Van Dyke Show, and I Love Lucy. But the show I looked forward to the most was Batman: The Animated Series. The cartoon was so high-quality that my 7-year-old self was amazed every time I watched. Little did I know that I would grow up to create plays that would combine this classic television superhero world with my own experiences today.

I found my love for the performing arts during my junior year at Theodore Roosevelt High School. I joined the drama class, got the lead in a play, and was hooked. After high school, I earned my theater degree at Cal State Northridge and worked part-time at CASA 0101, a performing arts nonprofit in my home neighborhood of Boyle Heights. There, I produced (and performed in) a string of stand-up and improv shows. In the summer of 2006, CASA 0101 commissioned me to co-write the script of Little Red, a musical adaptation of the Red Riding Hood classic with a modern twist. This was the production that led me to create my own superhero show.

In the musical, a teenage Little Red Riding Hood is torn between going to a rock concert and delivering a basket to her grandma’s house, which is a time-honored tradition in her family. I approached the piece like I do every script: I tried to write a play that would really make me laugh. Looking back, Little Red was the first play I wrote that dealt with themes—the dueling pull of tradition and of the new—to which I related. Most of the Latino theater I had been exposed to previously told of the hardships that immigrants had to endure to make it to this country. But I was born here, and those were hardships I fortunately never experienced.

After Little Red, I wanted to create a hero with whom I could identify. Fortunately, that same year, I was asked by CASA 0101 to contribute to Documenting the Undocumented, a festival of original works about immigration and the protests against restrictive federal legislation. I decided to write a superhero piece as my contribution to the festival. 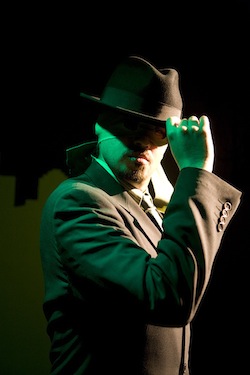 So I created El Verde. The piece takes the form of a classic episodic TV show like the 1966 Batman series or the Max Fleischer Superman cartoons of the 1940s. An announcer opens the show, introduces our hero, Arturo, and narrates the adventure that awaits him. Like Superman, my superhero is an immigrant—only he was born in a world that is not so far away, Mexico, and was raised in the United States. Arturo marries his American high school sweetheart and receives his green card—hence his superhero name, El Verde.

Unlike Batman or Iron Man, who are the billionaire playboys of the comic book world, El Verde is a blue-collar hero who spends his days working at an elote (corn) factory. He is a shucker, so it is his job to remove the husks from every piece of elote. When we meet Arturo, he has worked in the factory for several years and is yearning for something new. After an accident at the factory, Arturo tells his wife that he suddenly has superpowers, although he is not sure which powers he has exactly. So he ditches his factory uniform for his best and only suit and becomes El Verde.

The factory worker concept was inspired by my grandparents, who found work at a tortilla factory in Boyle Heights when they first came to this country in the 1960s. I also thought about the TV show The Honeymooners, which found humor in the lives of blue-collar characters. And like me, Arturo loves comic books. The heroes he has read about give him the ideal for greatness. He is tired of being known only as a factory worker and knows he can offer more to his city. So, he overlooks his limitations and strives to become a hero.

The humor of El Verde has been compared to that of The Rocky and Bullwinkle Show—it appeals to a younger crowd but there are plenty of jokes and references that adults enjoy. Arturo is naturally awkward and a bit of a dork, but he tries to play that off as El Verde, doing his best to be cool and collected. He is still fairly new to the hero game, so the audience enjoys watching him stumble and make mistakes as he tries to save the day. When it came time to cast the show, I assigned myself the role of Arturo/El Verde. If you are going to develop a show this fun, you might as well make yourself the lead. Besides, how often do you get the chance to be a superhero?

The one-act play debuted at the festival in 2006. In 2007, I expanded El Verde into a full-length production at CASA 0101; that version was comprised of quick episodes where our hero faced an array of different villains like the Kukaracha King, La Llorona Lisa, and Frita Kahlo. The production continued for a few years at CASA 0101 with El Verde experiencing new adventures and confronting new villains.

In 2011, East LA Rep offered me and Alejandra Cisneros, the show’s director, a residency to develop a script about El Verde’s origins, and his first confrontation with the evil La Quinceañera and her henchmen, Los Chambelanes. Earlier this year, East LA Rep partnered with Center Theatre Group for readings of this latest El Verde script in four libraries in Boyle Heights. During the last week of January, we read El Verde at the Benjamin Franklin, Robert Louis Stevenson, Estrada Courts Satellite, and Malabar libraries in Boyle Heights.

The live El Verde shows usually have a cast of about 10 to 12 actors and include a few designers, numerous costumes, and lighting. When we do readings at libraries, we scale it down to six readers. We stand behind music stands dressed in our everyday clothing—and we still have so much fun reading the play. I always get a kick out of hearing the laughs from the kids in the audience, and I hope they get a thrill not only from hearing a live superhero show, but from seeing a hero with whom they can identify.

It is great when kids from Boyle Heights come to see the show. But I am more interested in having kids experience live theater. Being involved in the performing arts has done a lot for me, but I was not really exposed to the arts until late in high school. I would like for kids to see at a young age that it is possible to write, perform, or design for the stage.

So, what is next for El Verde? First we are planning to continue reading the play at other events. My old junior high, Stevenson Middle School, has invited me to read it for students in May. The graphic designer of El Verde, Luke Lizalde, and I are planning to turn these adventures into a comic book.

And we will perform a new episode of El Verde in July at the Rosenthal Theater, which is located inside Inner City Arts in Los Angeles, where I took acting classes as a high school student and where I have been working this year as a lighting designer.

So, like our announcer says at the top of every show, “Get ready boys and girls for another thrilling episode of El Verde!”