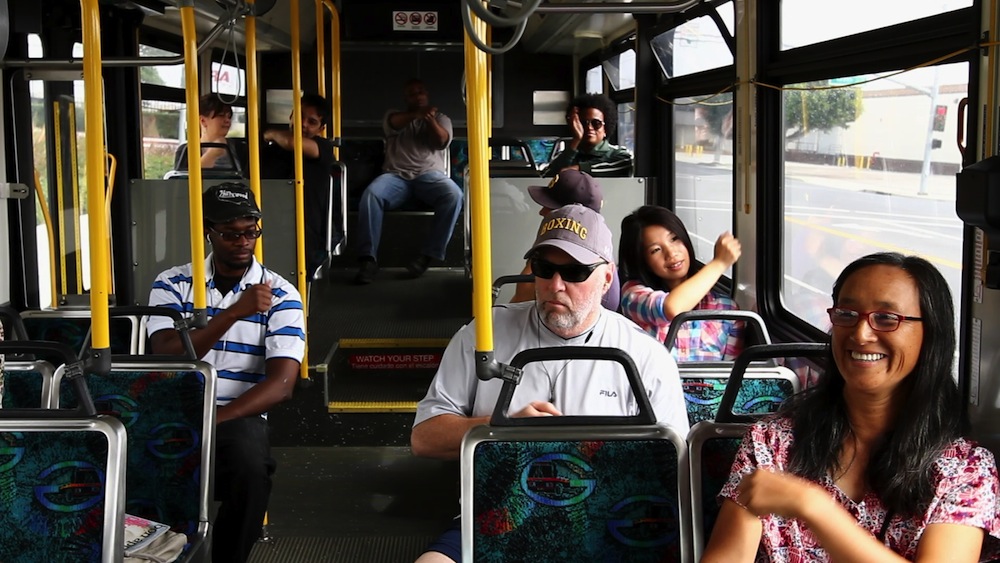 Whenever I am swinging my arms—a simple warm-up exercise as part of the practice of qigong, which cultivates energy by aligning mind, breath, and body—I imagine that I look like a repenting soul performing self-flagellation to random passersby.

I’ve mused for a long time about creating an urban opera involving scenes of bus riders spontaneously starting to hurl their arms in the air and beat their chests at stops. Living in Tokyo almost 20 years ago, where I spent countless hours on the train, helped me imagine alternate scenarios for my opera: Fierce old ladies in football helmets elbowing their way through the morning crowds, or salary men and office ladies crossing their legs and opening their newspapers one by one in a choreographed line dance. Stuck in Los Angeles traffic these days, I conjure up surreal and humorous moments that could literally break up stagnation and spread happy vibes.

So when Anne Bray, the executive director of the media arts project Freewaves, invited me to create health videos for Los Angeles County Metro buses, I was ready with my qigong opera idea.

The invitation awakened an old dream of mine. When I was studying photography at Bennington College in Vermont, the school shut down during the bitter winter months, and I spent my winter work terms in San Francisco and New York. In these cities, I depended on public transportation and dreamed of exhibiting my photographs on the buses and trains. I was convinced that art was not something just for privileged gallery goers. This is probably one of the reasons I became a filmmaker, which gives me flexibility to make videos that can be more educational or less formally experimental.

I like that qigong is not something exclusive, either. I first encountered qigong through my brother, an acupuncturist who is a devotee of the practice. I took it up when I sought out ways to cope with my own hormonal roller coaster during pregnancy a few years ago. And now, as I have been caring for my 93-year-old parents and teaching them simple qigong exercises like the ones in my bus videos, I am reminded how it is an equal-opportunity practice that even elderly, weak, or disabled people can do, and everybody can reap the benefits of increased circulation, mobility, and energy. 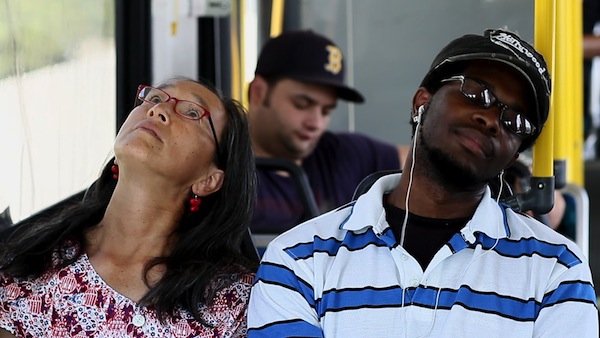 So much of bus riding seems to be about maintaining anonymity, and I wanted to give people the courage to be different and not worry about being laughed at. I remembered a brief but funny incident when I was riding the train in Tokyo. An old woman in her 60s, dressed in a traditional gray, silk kimono, began doing what seemed like pull-ups on the hanging straps on the train. Did no one tell her that someone might see her? This was Japan, where conformity was supposed to rule. But maybe her status as an older matriarch gave her a pass to do as she pleased. I smiled and admired how she could be oblivious to everyone else who pretended not to see her.

To set my videos on a bus, I called all the local municipal bus lines to inquire about renting a bus for a few hours. (The bus wouldn’t even have to move, I promised.) It turned out that insurance was the biggest cost. And only the city of Gardena would give us a break on the permit and waive some of the general liability insurance, automobile liability, and workers’ compensation since the bus was going to stay stationary.

Then I had to gather a group of willing subjects who would agree to play bus riders in my grand experiment, which I had a whopping three hours to shoot. I recruited from everywhere I could: I sent out a massive e-mail blast to friends and professional contacts; I posted an event on the Meetup web page for my qigong class; I left flyers at the local acupuncture school; and I offered extra credit to my class at Hollywood’s Art Institute of California. Freewaves posted on Facebook and tweeted to their fans.

With shot lists, diagrams, and schedule in hand, I arrived on set not knowing how many people I had—and knowing that I had to keep everything very simple. Fortunately, about 15 participants came, the perfect number to fill the bus, but not so many that it was unwieldy. Henry Lee, my qigong instructor, taught the bus riders the simple tapping exercises and explained what the practice was. Although many had no qigong or acting experience, they were a willing and enthusiastic bunch who let go of their inhibitions. During the shoot, I knew that I had to respect the spirit of the practice—keeping the energy flowing, making it positive and fun. It was not just about getting through my shot list, which is often the main aim of many directors who don’t care if they’re stressing actors out.

Because I was trying to produce videos tailored to the specific, noisy, uncontrolled environment of a bus of commuters, I knew subtlety would not necessarily be the best approach: Bright and bold colors would clearly read better on TV screens I knew were going to be small, just slightly larger than the size of a sheet of paper. Since Los Angeles encompasses so many different cultures and languages, I put text such as “Feeling sluggish?” and “Keep the energy flowing” in the top three languages among bus riders—English, Spanish, and Chinese. Even though I knew sound would only be barely audible, I also chose cheery, upbeat music to break up the monotony of the ride.

In the video “Stiff,” a woman with a sore neck sees the guy next to her rolling his head. Another woman sees the man sitting next to her pump his heels up and down. After both women give a kind of “What the heck are these people doing?” kind of expression, they mimic their neighbors.

In “Sluggish,” we see a man begin to thump his belly and get a quizzical look from the lady next to him. Pretty soon, everyone is thumping body parts on the bus—arms, shoulders, chests—and cracking up. Both of these scenes play out against 1960s cha-cha-inspired music punctuated by people moving their bodies.

I tried to document how my videos have played on busses, but it wasn’t easy. The videos were played on tiny monitors mounted near the front and back doors. Many monitors weren’t working on the buses I got on—and when they were, the audio was sometimes drowned out by the bus engine. Plus, the sun often created a glare on the monitor that made it hard to see what was happening on-screen. Also, my videos only ran once an hour, with ads or MSNBC playing at other times. When I did find a bus that played my video when I was on it, I felt shy about breaking the customary bubbles of isolation that passengers create around themselves when they ride the bus. I also tried not to call attention to myself or my camera gear after one bus driver warned me that I wasn’t supposed to shoot on the buses. However, the bus riders I did manage to chat with said that they loved seeing art on the buses. My friends who are bus riders have told me that the videos have motivated them to breathe a little deeper and do some stretching.

As an artist and filmmaker, I straddle a lot of different kinds of video-making, and this project was a pleasure compared to the arduous process of fundraising, shooting, and editing a feature-length documentary. But it isn’t always easy making something that will necessarily appeal to thousands of bus riders. While documenting the project, I traveled through many colorful neighborhoods, jostling with homeless people blocking the aisles with loads of bags, high school students toting skateboards and books, gray-haired ladies burdened with groceries. Young or old—they all looked tired, stressed, and bored, and in need of some relief. I am glad that that my videos are not preaching to the choir as I might be in a gallery or a theater. And if I can get just one person to sneak in a head roll, then I’ll be happy to have helped someone out.