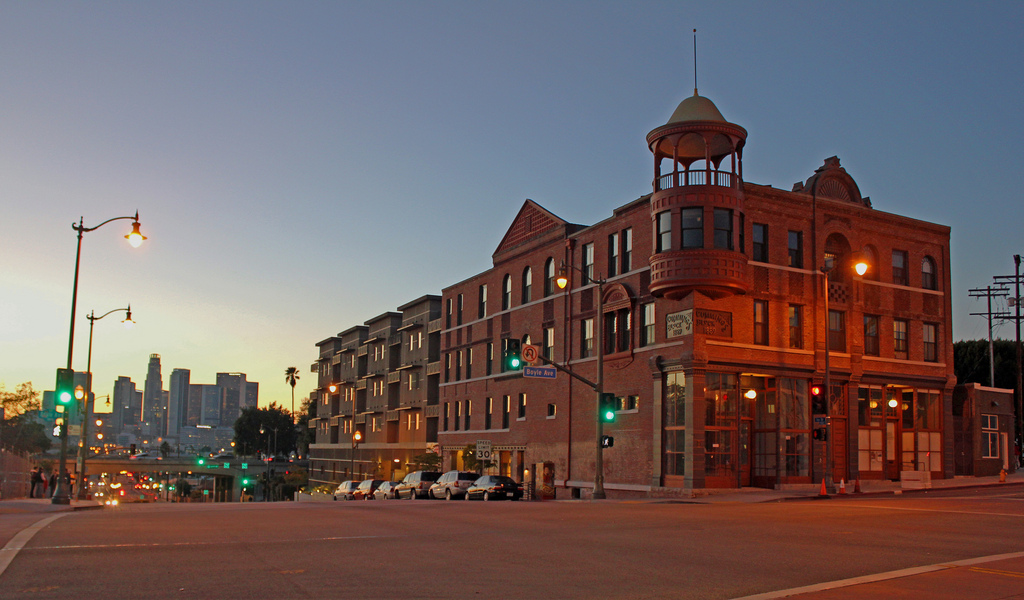 My father’s heart is failing. It is deeply surreal to trail an ambulance with its sirens blaring and know that the man most responsible for your commitment to fight for the underdog, for your unlikely Ivy League pedigree, and for the fact you are an Eastsider, is the patient being transported with such speed.

Miguel Z. Cabildo came to Los Angeles from Mexico in 1954. As a tailor, he made his living in Beverly Hills, measuring and altering clothing for movie stars and other wealthy patrons. From his hospital bed, he tells me about delivering clothes to Tony Curtis and Walter Matthau in his boss’ convertible. Apparently, Jack Cassidy was the prettiest man he has ever seen, and I quickly remember the autographed picture of David Cassidy that my father secured for me decades ago. His stint making clothes for the stars was followed by several years of work at Saks Fifth Avenue. When he was newly arrived in Los Angeles, he lived on Broadway and in the tenements of Bunker Hill. But when he married and settled down, he moved to an apartment across the street from Hollenbeck Park in Boyle Heights.

In those days, every so often my older brother, mother, and I would put on our best clothes and take the #30 bus from Brooklyn and Rowan avenues to downtown, where we transferred to the Wilshire bus to get to Saks Fifth Avenue. These trips seemed to last for an eternity. Because my mother did not speak English, it was up to my brother and me to navigate the bus ride across the city. In this way, I learned about inequity, the power of opportunity, and the importance of who gets to make decisions. Even as a 7-year-old, it was clear to me that the people who governed Los Angeles cared less about the East than they did about the West.

Several years later when my brother applied to college and I was still in junior high, he explained urban planning to me, and those bus rides began to make sense. The planners of Boyle Heights and East L.A. really didn’t care about the people who lived here. There is no other explanation for why a single community had to pay the price for Southern California’s growth with not one but five freeways cited within its boundaries. The freeways indisputably spurred growth and facilitated the movement of goods not only through Southern California but also through the entire nation. For our community, the freeways meant the loss of an estimated 25 percent of our housing stock, the displacement of thousands, and environmental degradation. Today, the freeways remain my daily reminder of what happens when a community lacks power and decisions are made by people other than those that will be impacted.

While we have made some progress on the Eastside, too little has changed. And the residents most impacted by change have a difficult time being heard above the din created by the excitement of being the next hot neighborhood. These days, there is talk of the gentrification of Boyle Heights. It’s the next Echo Park, or Silver Lake, or Venice, depending on which real estate agent you talk to. But you don’t hear about the displacement of long-time residents. This is deeply troubling, given how many people had to relocate for those freeways, and the history of neglect and disinvestment in Boyle Heights. One current proposal, being debated right now, would demolish the rent-controlled Wyvernwood Garden Apartments in Boyle Heights, to make way for a new, mostly market-rate development that would quadruple the existing residential density and add some 300,000 square feet of commercial space. An estimated 6,000 people who currently live in the complex would be displaced, at least temporarily.

What’s different now is that I can do something about it. For more than a decade, my colleagues at East LA Community Corporation (ELACC) have built a model for organizing low-income renters to influence land-use decisions, to create new homeownership opportunities, and to mitigate displacement by preventing foreclosures and constructing affordable rental housing. Boyle Heights is a promising place for such organizing and work because the community is strong, dynamic, and growing.

Despite the neglect of absentee landlords, the commercial corridors of Boyle Heights—along Cesar Chavez Avenue and First Street—have rarely had vacant storefronts. Whenever a small business failed, another paisa would set up shop within weeks. Recently, some of these paisas have been replaced with younger entrepreneurs who are homegrown and also committed to community. They are meeting the demand for goods and services from socially and health conscious locals, former locals, and other patrons looking for an “anti-mall” consumer experience. In the Boyle Heights of my youth, there wasn’t a market for vegan pozole and handcrafted silver calavera earrings that retail at $150. Both of these items can now be found within a block of the Mariachi Plaza light rail station—and a stone’s throw away from the Historic Boyle Hotel-Cummings Block, once the most notorious slum building in East L.A. Back in the day, we looked further east to the newly constructed shopping malls to spend our disposable income and secure brands that equaled status and were not available in Boyle Heights or East L.A.

At the gateway to the Eastside stands the Boyle Hotel, which is on the National Register of Historic Places. I was part of its revitalization. In 2006, the ELACC seized the opportunity to buy the 1889 building despite the fact that its best days were 100 years behind it. We knew the hotel was a prime candidate for a market rate redevelopment geared toward more affluent renters. We had seen such gentrifying redevelopment on Spring Street and the so-called Arts District just over the L.A. River. Our worry was that the Boyle Hotel would catch the eye of a developer who decided to jump the L.A. River and head east.

We bought at the top of the market and survived the great recession thanks to the immigrant grit that is coded in our DNA. In 2012, we delivered the iconic building back to the community that has loved it through the good and bad times. It now contains affordable apartments for families and individuals who earn between 30 and 60 percent of the area’s median income. The hotel is no longer a candidate for gentrification; it is a bulwark against it.

Despite this success, there is still confusion and resistance in the local community to anti-gentrification development. Some long-time homeowners in Boyle Heights actively oppose the development of in-fill affordable housing because they fear the density it can create along commercial corridors. Such opposition is understandable. While their friends and relatives fled to Hacienda Heights, Whittier, and other suburbs further east, these homeowners stayed behind. They watched their neighborhoods deteriorate as absentee landlords milked and mismanaged properties, and as the city neglected to invest in infrastructure. Given this history, shouldn’t these loyal homeowners be rewarded with increased property values and the mass exodus of their bothersome poor immigrant neighbors?

The answer is, politely and firmly: no, not all. What they have been unable to discern is that their immigrant, transit-dependent neighbors are the reason that Boyle Heights maintained vibrant and bustling commercial corridors. They may not have liked the retailers that set-up shop on Cesar Chavez and First Street, but occupied commercial storefronts are much better for a community than vacant buildings. The low-income renters now facing potential displacement kept apartment buildings full during the decades of public and private neglect.

These neighbors who rented didn’t have the luxury of a car to drive to Monterey Park for groceries or to Montebello Town Center for clothing and entertainment. They shopped on Cesar Chavez Avenue and bought groceries at the Big Buy and wore their Sunday best to eat at La Parrilla after church.

They should be able to stay here as long as they like. And to do that, Boyle Heights needs more than affordable rental housing. Residents themselves must develop their capacity to engage developers and government in a way that allows them to direct the development of their community. My organization, ELACC, and two other movement-building organizations (Inner City Struggle and Union de Vecinos) are working on precisely that.

It would be the height of injustice if the low-income renters that kept Boyle Heights vital were pushed out now—just as the community is seeing its fair share of investment in the form of the Gold Line, the expansion of White Memorial Hospital, and new school facilities. These low-income renters offer a test: If they can afford to stay in the neighborhood for as long as they like, that will be proof that we were able to keep gentrification at bay.

I am grateful that my father chose Boyle Heights as the community where he first settled his family. As a student at Malabar Elementary and later Belvedere Junior High, I was told that leaving the Eastside was the key to success. Thanks to my father’s activism during and after the War on Poverty, and thanks to the education those long bus rides west provided me, I learned to see the potential, and the necessity, of Los Angeles’ Eastside. I rejected the notion that opportunity existed outside of my community and instead embraced the idea that I could create opportunity right here.