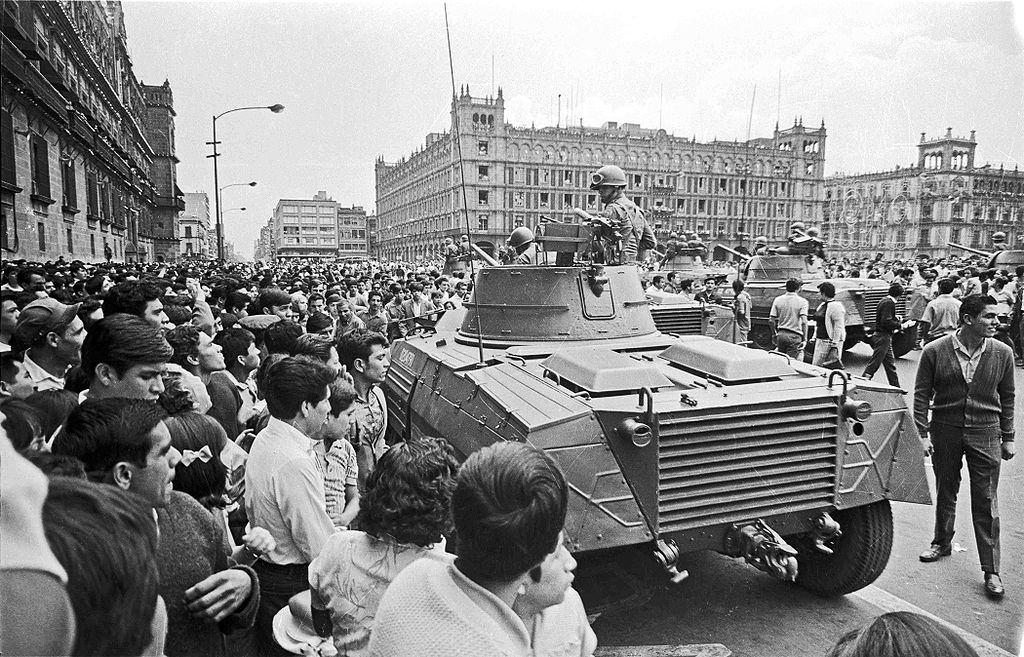 Protestors clashed with riot police as the World Cup kicked off in Sao Paulo, the latest manifestation of widespread discontent with the expensive (and behind-schedule) preparations for the massive sporting event. Even as protests threaten to mar the spectacle, this summer launches Brazil’s highly anticipated coming-out party. For two full years, between this summer’s World Cup and the 2016 Summer Olympics, South America’s dominant power will be the epicenter of global sport and its supporting popular and corporate cultural realms. Holding onto the international sporting spotlight for such an extended period of time is rare: the last time a country was granted the back-to-back Olympic-World Cup privilege, albeit in reverse order, was Mexico in 1968 and 1970. Don’t tell the protesting Brazilians, but that didn’t go so well.

The economic benefits of hosting massive sporting events like the World Cup (awarded to a country) or Olympics (awarded to a city) are disputed, but there is no denying that physically hosting thousands of athletes, fans, journalists, and corporate sponsors—and virtually hosting a TV audience in the billions—provides governments with a unique opportunity to showcase their countries for weeks on end. This type of exposure can bolster host countries’ reputations and expand their international influence. Of course, governments aren’t the only ones happy to soak up the spotlight: so too are anti-government protesters eager to embarrass the sporting event’s hosts and make their grievances known around the world.

Back in the late 1960s, Mexico’s Olympics-World Cup moment was a recipe for disaster from the start—even more so than Brazil’s. Following a series of tumultuous coups, revolutions, and rebirths in the 19th century, the Partido Revolucionario Institucional (PRI) brought needed stability to Mexico. But with each president handpicking his successor for four decades, the once-progressive party degenerated into an old boys’ club. Whenever groups protested—from urban labor unions to rural peasants—PRI leaders co-opted them into the party machinery. By the 1960s, the Mexican state had become a highly authoritarian one-party dictatorship.

With the Olympics approaching, the government sought to project an idyllic, postcard image of Mexico as a resurgent nation, the grandeur of its ancient civilizations coupled with a modern, 20th-century flair. But not everyone was eager to go along with the government’s narrative. 1968 featured exuberant, revolutionary student uprisings around the world, and by seizing the international spotlight, Mexico City’s student movement struck at the heart of the ruling PRI.

A sudden wave of police brutality sparked student marches in 1968. Protests began in the summer and continued into the fall—when Mexico City was to host its Olympics—growing larger as time wore on. Eventually 200,000 students gathered at the zócalo, Mexico City’s main public square. The students particularly concerned PRI officials because they demanded political liberty, not political patronage. They condemned the government for using “terror tactics” to suppress political dissent and chanted: “México—Libertad. México—Libertad. México—Libertad.” In the student protest, the one-party system faced its most serious challenge yet.

Finally, on October 2, just 10 days before the opening ceremonies, some 10,000 students gathered at the Plaza of the Three Cultures in a part of the city known as Tlatelolco. Amidst chants of, “We don’t want the Olympics, we want a revolution!”, President Gustavo Díaz Ordaz decided to flex his muscles. Specially trained security forces for the Olympic Games stationed themselves around the entrances to the plaza to seal in the crowd. A green flare shot up in the air, lighting the square. A red flare shortly followed. As the surprised crowd looked up, a hail of bullets turned the peaceful student protest into a massacre.

Tlatelolco, once a thriving pre-Columbian market and then a cultural landmark featuring architecture from Mexico’s ancient, colonial, and modern periods, has since become synonymous with Tiananmen Square and other tragic episodes that speak to unhealed wounds and untenable impunity. That bloody night 45 years ago, when Mexican government troops slaughtered an undetermined number of people (researchers at the National Security Archive have identified 44 victims, but estimates range as high as 300), remains shrouded in mystery. Mexico’s state-controlled press spun the story, claiming that student snipers fired first. Unlike what happened at Tiananmen, no single picture has captured the moment for future generations.

Perhaps the subsequent Olympic Games in Mexico City dimmed American memory of the massacre. To the extent that Americans recall the 1968 Olympics at all, they probably think only of African-American track athletes Tommie Smith and John Carlos standing on the podium, raising black-gloved fists during the national anthem. Or maybe this forgetting was simply the product of another era, when the absence of 24/7 cable news and social media could allow governments to keep even relatively open outrages fairly contained. It was certainly an era of handy narratives to assuage American audiences: Mexico’s Díaz Ordaz administration claimed repeatedly and unabashedly that Soviet, Cuban, and even Chinese communists were behind the protests. Although the CIA subsequently concluded that there was “no firm evidence that Communists instigated the present crisis,” domestic instability in Mexico was not a welcome development for the United States, no matter who was behind it. So, there were no condemnations from the international community, no public outcries, and the Olympics went ahead without further incident.

The massacre at Tlatelolco, though it became a potent rallying cry for future activists, did not spark a sudden great awakening in Mexican society, either. Despite deepening disillusionment with the ruling PRI, the march to greater political freedom and democracy developed very slowly over the ensuing decades. Finally in 2000—over 30 years after the Tlatelolco massacre—Vicente Fox, a member of the opposition Partido Acción Nacional (PAN), was elected president of Mexico, bringing the PRI’s seven-decade reign to a close. While the PRI is back in office, what happened that night at Tlatelolco remains a taboo subject, one that haunts the country and belies the nation’s claims to have resolved its past.

A half century has passed, and the discontent in Brazil is unfolding in vastly different domestic and international political contexts. Yet the specter of Tlatelolco still offers a cautionary tale, a chilling example of how tragically things can turn when governments and protestors clash in the heat of the international spotlight.