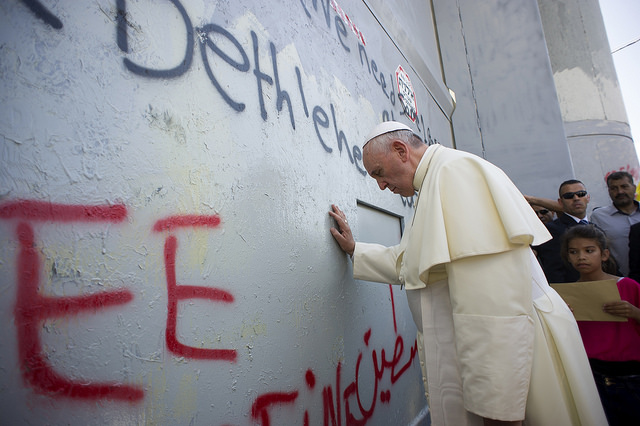 For Pope Francis, this has been a season of invitations. First, he toured the Holy Land, as guest of honor for heads of state, religious leaders, and ordinary people alike. Earlier this month, in response to an invitation to prayer “to God for the gift of peace,” President Mahmoud Abbas of the Palestinian Authority and President Shimon Peres of Israel joined him at the Vatican.

The latter question seems easier, because the answer is practical. To be invited by Francis is to be courted by the most sought-after personality in all the land. After all, how could either Abbas or Peres have said no? When the arguably most charismatic world leader of the 21st century presents you with an invitation, and not to negotiation but to prayer, can one actually decline?

And beneath the charisma lies the specter of realpolitik. After all, isn’t Peres leaving office before July is through? And shouldn’t Abbas take any opportunity for peace? But amidst these scattered facts and realistic calculations, there is magic, and mystery, that influence the invitation. Could anyone else in the world have brought the presidents of Palestine and Israel together so quickly by resting his forehead on the graffitied wall that divides their countries?

The world is fascinated with Pope Francis because in so many ways he is a puzzle to us, and thus forces us to think, and challenges us to a change of perspective. But we are also fascinated with him because he inspires hope in us, and hope is something we have learned not to trust. And yet invitations continue to be issued, and hope continues to bubble up—and not just from us.

Our fascination with Pope Francis also has inspired invitations to him, from all over the world. Last year in India, for example, Catholics joined with the Bharatiya Janata Party (BJP), whose leader Narendra Modi was recently elected prime minister, to invite Pope Francis to come to Goa to celebrate the Jesuit saint Francis Xavier. Closer to home, President Obama recently added his name to an earlier invitation by House leaders John Boehner and Nancy Pelosi to visit the United States and address a joint session of Congress. And back in February, the AFL-CIO of Los Angeles invited Pope Francis to come to the United States in order to help them “shine a light on the crisis of poverty and low wages” afflicting many U.S. workers.

Each has invited Pope Francis for different reasons. Some hope he will bless them with the prestige of his office, others that he will join them in promoting a certain agenda, still others that he will reconcile the estranged, or be the crown jewel of a religious celebration.

As reasons for inviting the pope go, the AFL-CIO’s is an excellent one that lies close to the heart of a pope who has tweeted that “inequality is the root of social evil,” who has urged United Nations leaders to resist the “economy of exclusion,” and who has written:

We can no longer trust in the unseen forces and the invisible hand of the market. Growth in justice requires more than economic growth, while presupposing such growth: it requires decisions, programmes, mechanisms and processes specifically geared to a better distribution of income, the creation of sources of employment and an integral promotion of the poor which goes beyond a simple welfare mentality (Evangelii Gaudiam, paragraph 204).

These are powerful words. But, as President Obama noted after his own recent visit with Pope Francis in Rome, they are not particularly practical. “His job is a little more elevated,” Obama said. “We are down on the ground dealing with the often profane.”

Maybe that’s good enough for everyone waiting to hand Pope Francis their invitations. Maybe the AFL-CIO and the BJP and the presidents of Palestine and Israel and the United States simply know the game and are adeptly attaching themselves to the pope’s celebrity. They’re being pragmatic.

Such pragmatism has its benefits. It is a gift to us, but not only. It is also a set of blinders. Perhaps President Obama saw this when he remarked that Pope Francis’ “voice is one that I think the world needs to hear. He challenges us.”

This challenge is evident in so much of what he does: living in a guest house in Vatican City, embracing the disfigured and the handicapped, leaving the safety of his motorcade to rest his head in prayer against the wall separating Bethlehem—and so many Palestinians—from Israel. So much of what he does stirs up this strange desire to change in us. And this is what is deeply fascinating.

Will peace come to the Middle East because Abbas and Peres made a trip to Rome? Will Pope Francis go as the Roman Catholic pontiff to India at the invitation of the Hindu-led BJP? Will he come to Los Angeles and advocate for just wages? I don’t know. And in all honesty I’m not sure it matters.

Because he is not the solution, he is only the catalyst for our being changed. He is the most merciful of bombs, exploding our categories. He shows us that it is not him, but our conversion, that provides the solution. We are fascinated by him because we know that it is we who must change, that this is the truly pragmatic response.

We want to be challenged. We’re tired of being closed in by the walls of by realpolitik.

The meaning might be this: We have been reminded of what we really want. We have heard someone speak with authority. And—despite our insistent protests to the contrary—we still recognize that voice.