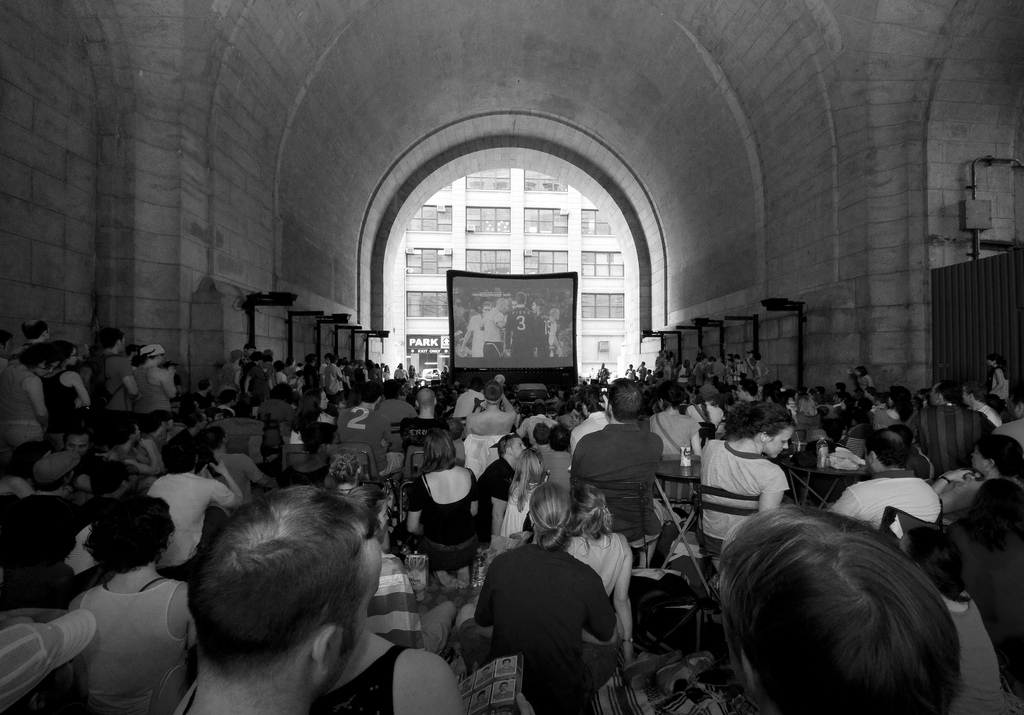 Maybe I did expect to be in a New York City bar below 14th Street at 7 in the morning at some point. Doesn’t every newly minted college graduate hoping to make it in the Big Apple’s art and greed industries have that expectation? I’m nearly positive it is on the city’s “making it” checklist. I didn’t, however, expect it to be mid-week, on my way to work, and involving zero women.

Nonetheless, I found myself at Dempsey’s in the East Village at dawn, watching the least anticipated game of the 2010 World Cup: New Zealand vs. Slovakia. I had embarked on a self-appointed quest to watch all 64 games taking place in South Africa over the course of a month. I had done this for the 1998 France Cup, but back then I was in high school, on summer vacation. Now I held a 9-5 job in corporate publishing. 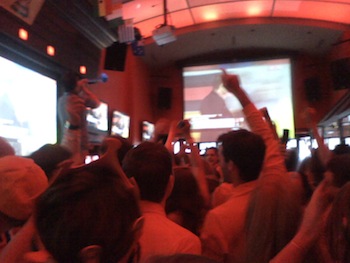 I bounced around New York watching games before work and taking long lunches in the middle of the day in dark bars. I watched games surrounded by foreign nationals and the ever-growing USMNT fan base (that’s the U.S. Men’s National Team, for the uninitiated). I watched games on a bus to Boston and at my niece’s second birthday party. I kept a blog that I treated as a personal journal, and to my surprise about 150 people seemed to follow it. I even got some fairly technical questions sent in to me by readers, including “If Carlos Tevez is the second ugliest man in the tournament, who is the ugliest?” Some other smalltime blogs linked to my own, lauding my ethnic ribbing of the gelled-haired, headband-wearing Italian national team. A Greek chap got angry at me for scorning his team’s goading tactics against an undisciplined Nigerian squad. I was having fun.

Drinking breakfast pints and waving the flag of nations I’d adopt for 90 minutes at a time was great, but of course I couldn’t sneak away from my job for every game. There were many I had to watch under fluorescents in my cubicle. This, though not ideal, greatly improved my workday. But when my boss interrupted the Ivory Coast match I was watching at my desk and she apologized sincerely, I began to realize the low stakes of my work. It crossed into the absurd when a vice president from our corporate headquarters in Germany came into my cubicle to watch Die Mannschaft. She didn’t know my name, but she did know that my job was unimportant enough not to care. 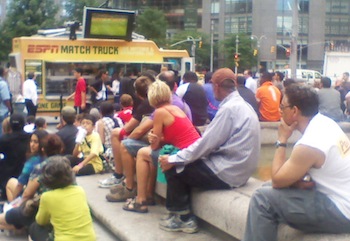 I hated my career. This was not a big reveal. It wasn’t Portugal’s trashing of North Korea or being cramped on a bus trying to watch two semi-tedious games at the same time that made me realize that punching in numbers on a spreadsheet and passing along UPS orders was not the ultimate career for me. I had half-heartedly searched for new jobs, but I was comfortable where I was. I liked my colleagues, had a lot of friends at the company, and captained the softball team. No, the 2010 World Cup did not shine a light on the fact that I didn’t care much about my job. But it did illuminate that no one else cared about it either.

Seven months later, I quit that job. Before the end of the next year, I’d left New York City for the Bay Area. As the World Cup in Brazil opens, I’m finishing my first semester of medical school in Australia (where I will be watching games in the middle of the night) and am set to have a wedding stateside in January. Watch all 64 games, learn about life, become a doctor, get married. FIFA should hire me for an ad campaign.

I love being an American fan of international soccer. There are very few times we as Americans get to be the clear underdog, and the World Cup is one of them. “300 million people,” a Scottish bartender at Luca Lounge in Alphabet City said to me with pity during the thrilling third-place match between Uruguay and Germany, “and you can’t find 11 who can beat Ghana at a football match.”

It took four years, but we proved him wrong. And even in 2010, the USMNT’s 0-2 comebacks, last second game-winners, and a final gut-wrenching defeat in extra time, made it clear that the U.S. could compete on the world stage. While I was standing on a chair tossing piles of napkins in the air, celebrating Landon Donovan’s dramatic goal against Algeria, Brooklyn’s Black Horse Pub burst into “The Star-Spangled Banner.” On the pub’s giant LCD screens, bars around the country were being broadcast, doing the same.

Anyone who has ever identified with Joan Didion’s “Goodbye to All That” or The Onion’s oft-shared article on realizing that New York is a horrible place to live—and perhaps anyone who’s thought to themselves that New York’s a nice place to visit but not to stay—should try to bounce around the city during the 2014 World Cup. I’ll never forget leaving the orange-clad Dutch fans at a Midtown bar blaring their euro-techno to celebrate a win over Brazil to join the African nationals rallying around Ghana at a South African restaurant in Fort Greene. They watched their continent’s last hope in the tournament dissolve twice: once when Luis Suarez’s handball denied them a victory, and again when the ensuing penalty kick rattled the crossbar. The crowd that had drummed and danced in the street at halftime fell silent, with tears in their eyes, until the quiet was punctuated by Ghanaians wailing in agony.

The 2010 World Cup showed me a city that forces you to interact with the rest of the world’s population. When I think back to the Chileans wrapped in flags and caked in face paint or the Korean grocer who left his shop to sneak a peek at the neighboring sports bar, there is no doubt I miss New York. The 2010 World Cup also brought me face to face with true, unadulterated passion and when it was over, the void was intolerable. Unfortunately I had to leave a place I loved in order to do something I loved. But when the 2018 World Cup rolls around, I’m counting on returning to a bar below 14th Street—even if it’s at 5 a.m. to watch the match from Moscow. There are many reasons to call New York the city that never sleeps. My favorite is that somewhere around the world, a soccer match is being played.