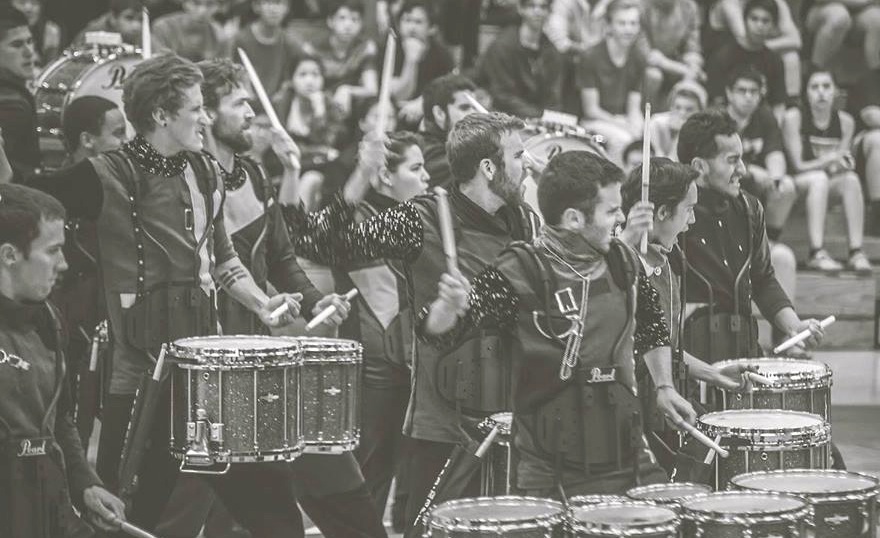 A futuristic scrapyard setting. Three 60-inch TV screens showing black-and-white static. A lookout tower. Then: a steady beat from a player on a drum set, cymbals crashing, and marimbas rolling to a tense crescendo after a voice over the loudspeaker asks: “And as we reach to the stars, who will be watching and what will they see?”

This was the show the Riverside City College indoor drumline put on at the Winter Guard International percussion championship this April. We called our show “So This is Earth?”—a musical way of asking what aliens would think if they saw images of Earth. For seven minutes, 40 kids—in scruffy blue-and-gray uniforms and on a dozen kinds of percussion instruments—played music composed and arranged by my writing partner Jim Wunderlich and me. At the same time, they swayed and weaved on a 60-by-90-foot vinyl tarp, following an intricate and precise choreography they had been practicing for six months.

Those of us involved in indoor drumline inhabit the world of marching bands, but don’t get us confused with what you saw in The Music Man. Indoor drumline is a distinctive species of musical performance—one that the community of Riverside has supported like no other place. 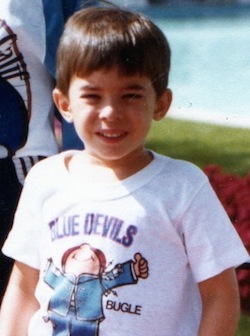 I was a 5-year-old living in Riverside in 1981 when my dad first called me over to watch a drum and bugle corps playing on the local PBS station. Drum corps trace their roots to military marching bands. They can have over 100 percussion, brass, and color guard performers. They don’t have woodwinds like traditional marching bands, and they often stray from the traditional John Phillips Sousa repertoire.

My dad, who didn’t have any formal music training but always loved listening, was particularly impressed by the jazz stylings of a group in Concord, California, called the Blue Devils. At the end of the show, there was a hotline you could call if you wanted more information. We did—and found out that there were regular drum corps shows right here in Riverside.

Riverside was and is the hotspot for drum corps in Southern California. Every June, eight to 12 drum corps groups from around California and the West descend upon the RCC football field for an evening of shows. These performers are the rock stars of the marching band world and it’s pretty typical to see kids asking for their autographs.  For me, the real show was always in the parking lot, where I could see the performers up-close, warming up and playing through their show music.

Drum corps shows became regular family outings, as well as appointment TV, through the 1980s. We also traveled to Northern California to see competitions. My mom was enthusiastic because she studied music performance in college and played the piano and bassoon.

I played the trombone in middle school, but once I became a sophomore at John W. North High School, I started to become obsessed with drums. I had a drum pad and sticks, and would mimic what I saw on the drum corps shows I taped on the VCR.

By the winter of my senior year, I had left school early to live the dream—playing tenor drums (also known as quads because one person carries at least four tenor drums) with the Blue Devils up in Concord. I traveled with them to shows all over the country that summer, including to Foxboro Stadium outside of Boston for the world championships. I finished my high school coursework when I came back to Riverside in the fall.

I made drum corps my full-time life. I marched with the Blue Devils from 1994 to 1997. In 1995, I even won the world’s individual tenor drum competition. I joined the Blue Devils’ staff in 1998 as a music tech, working with the tenor drummers on developing their technique and interpretation. I also started working with high school marching bands across California (including my alma mater)—writing percussion music, teaching players. I flew across the country to conduct weekend clinics and spent several years as a teacher in Tokyo.

I joined my first indoor drumline group in 2000 as a part of the Sacramento Freelancers’ teaching staff. By that time, I had returned to my hometown and was able to live in Riverside and fly up to Sacramento for practice and shows. That same year, my mentor Scott Johnson, who is the head of percussion at the Blue Devils, approached me because he saw an opportunity to start an indoor drumline at Riverside City College. 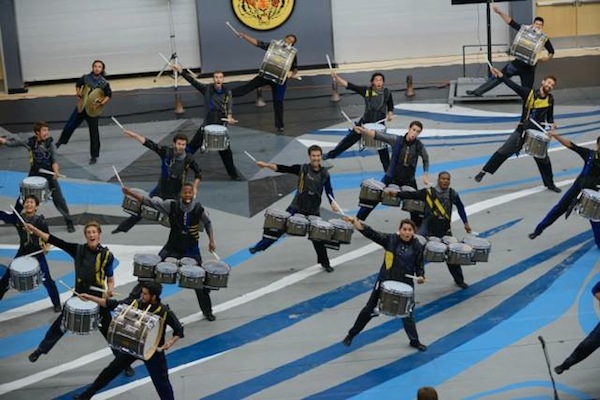 Many students come to RCC just to join its marching band—the program is that strong. The band, under directors Gary and Sheila Locke, does far more than football. They perform elaborate shows, appearing regularly as featured acts at the Bands of America Grand National competitions, the Rose Parade, and high school marching band competitions around Southern California.

Indoor drumline is less complex than drum corps because it doesn’t have a brass section or color guard. But it still includes some combination of tenor drum, snare drum, bass drum, and cymbal players creating intricate patterns on the stage, while a kind of “pit orchestra” of marimbas, vibraphones, timpani, electronic keyboards, and drum set accompany them. Indoor drumline groups provide opportunities to practice and perform from December to April, before the traditional spring-to-summer drum corps season.

We thought an indoor drumline could complement the fall marching band activity at RCC—and supply a host of potentially good players for the Blue Devils. We were able to start the program in 2001—under the Lockes’ oversight—and we went to our first world championship in 2002. We won first place with a show called “The Sound of Silence,” featuring a girl who is deaf explaining how she experiences percussion. Since then, RCC’s drumline has won three other times and have only been out of the top two three times.

We typically have 100 to 150 kids come to an audition each year, with as many as 250 one year. Most of them come from Southern California, but we’ve also had drummers from Northern California, the Central Valley, Arizona, Colorado, even Japan. Many kids come in technically proficient—and often are the best from their hometowns at playing their instrument—but we have to see if they have the potential to be performers. Our pieces require precise movements, attitude, and acting.

Instructors can only make a living off of drumline if they work with many groups at the same time. That can get overwhelming. In 2007, I stopped almost all of my drumline and marching band activities. I felt a little like a machine churning out percussion music during the hours I was not driving to Orange County and Los Angeles to work with high school marching bands. I turned my focus solely to RCC, which was the group I loved the most, and also began developing my career as a business-to-business sales professional.

I keep doing drumline because I love the creative outlet it provides—and because I love seeing these kids bloom. The students in our program go from participants in their high school marching bands—who typically are secondary to the football teams on the field—to the main act in sold-out arenas, performing for a full house of drumline enthusiasts. Their determination was most on display in 2006, when a glitch with one of our mic cables in a preliminary round meant that we had to shut off our electronic instruments at the beginning of our show. With these voices missing, and an admittedly abstract theme (“The Sacred Geometry of Chance”) our show was a mess. We were ranked sixth going into the finals, and there was no realistic expectation we could climb into first place. But the kids left it all on the floor—it was probably the greatest live performance I’ve ever seen from any drumline group. We moved up in the standings to fourth place.

This year, with our alien-themed “So This Is Earth?” show, we also came in fourth. I could blame the newness of incorporating the TVs or I could say that we needed to focus our theme better, but the judges that day just decided other groups performed better than we did. It’s disappointing—crushing, even—to work for over 500 hours as a team and feel as if you didn’t accomplish your goal. But we’ve already got a concept for next year (you’ll find out what it is when we do our first show in February). I’m already tapping it out on my drum pad at home.