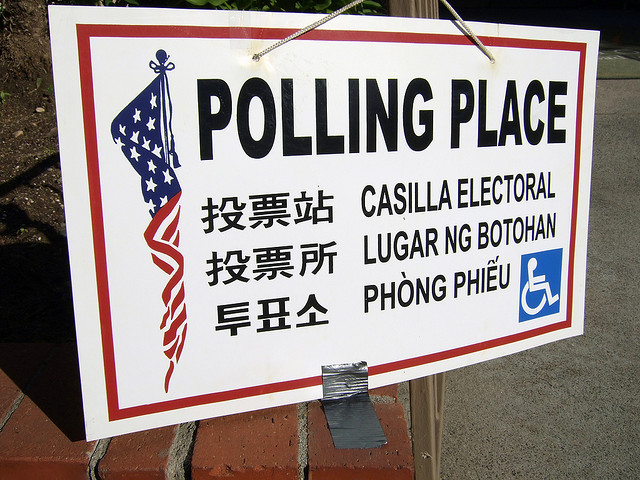 Out of all the election-related direct mailers I’ve received these past few months none was more crucial than the one that arrived the afternoon of election day: June 3. A flier from the Los Angeles County Registrar informed me that my precinct no longer offered a place to vote in person. I’m now in a vote-by-mail precinct, and if I want to vote, I must mail a ballot in.

It would have been helpful to learn this information earlier—at least before I tried to vote election day morning. No location was listed on my sample ballot (which I did receive on time), but that didn’t seem like a problem. I’ve had the same polling place—in Pearblossom, a small community in the Antelope Valley—pretty much my whole adult life. On election day I decided to look it up online, just to confirm. The secretary of state’s website returned this message: “Sorry, we were unable to find your election day polling location.” The link for more information sent me back to the query page I’d just used.

Most people probably would have stopped there, but as someone who works as an advocate of public engagement, I’ve long argued that democracy is often at its best when it is not convenient, when it makes demands of citizens who are invested in the process. With my own words echoing in my head, I decided to check out the county registrar’s voting website. There, I was told I had to vote by mail. I was certainly wishing I’d checked earlier, but it never occurred to me that I’d have to.

Confused, I scavenged my paperwork for the vote-by-mail ballot I’d received and set aside. It hadn’t stuck me as unusual to receive it; I’d voted absentee in the past, but preferred to vote in person when possible. It took me a little while to find it. Hidden inside the ballot, I found a bright sheet of paper informing me that I had no choice but to vote by mail. If I couldn’t mail the ballot in time (mail ballots have to be received on election day or before), I could drop off my ballot at any L.A. County polling place on the day of the election. But there was no information about where those might be. Nor could I look polling places up online without an actual house number in another precinct. Though not insurmountable, the obstacle was frustrating and time-consuming.

I’d heard a lot about the need to “get out the vote” but it certainly didn’t feel like anyone wanted me to vote.

Today, as I read story after story about why L.A. County voter turnout was at an all-time low of just over 13 percent, I wonder: What if similarly situated voters intended to vote, but gave up? I haven’t seen this possibility proposed in any election day post-mortems, but I did come across a 2009 study suggesting that mandatory vote-by-mail systems lower the odds of individuals voting by 13.2 percent.

So how did my community end up losing its polling place? The California elections code allows precincts with 250 persons or less—which are almost guaranteed to be rural precincts like mine—to be declared vote-by-mail at the discretion of the county. However, the code also requires elections officials to “notify each voter of the location of the two nearest polling places in the event the voter chooses to return the ballot on election day.” L.A. County failed to fulfill this requirement, and seemed to make little effort to promulgate the change to affected voters (nothing on Twitter or social media, no public service announcements, no paper fliers in the post office).

I understand that staffing polling places in rural areas is challenging. But why not consolidate these precincts rather than instituting mandatory vote-by-mail? There are many reasons people prefer to vote in person: convenience (rural areas generally don’t have home mail pickup), concerns about privacy, or simply a sense of civic pride.

Declines in voter turnout are a nationwide trend, and even in L.A. County, the lack of turnout obviously goes beyond frustrated voters in a few rural precincts. But of all the possible reasons for failing to vote, giving people access to, and knowledge of, polling places is a relatively easy factor to address. Amidst the calls for more civic engagement and fiery op-eds on polarization and disengagement, we should not forget to hold elections officials accountable for promoting engagement through the processes already in place.