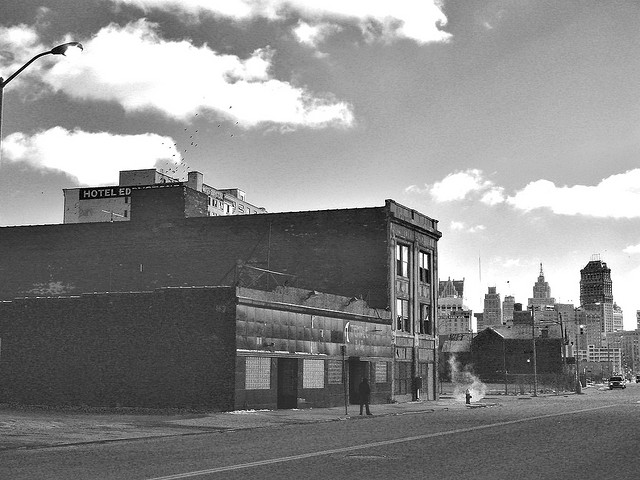 Mark DiPietro, recently reclassified
as the only kid on the street with divorced parents,
reaped the benefits when his absent father returned
at Christmas with Globetrotter tickets.
Classified as best friend, I went along.

Watch your car for a dollar? His father
glanced around, wearily paid two black kids.
We parked on one of many snowy streets
of abandonment without meters or guarantees.
The kids scowled at me and Mark, eye-level.
the scowl they earned on the small stage
of their black neighborhood visited
by suburban whites for hockey
or Jethro Tull or Traffic or black
basketballers mugging for laughs.

The warm-up act was Ping Pong
played with methodical exuberance
as the sparse crowd settled, draping
coats over vacant seats. We sat down front
in Mr. D’s seats, front-row folding chairs.
A ping pong ball rolled off the floor,
and I palmed it into a pocket.

His father’s tickets stamped Complimentary
across the stubs he mangled in his fist.
I never learned what he did for a living,
for that too involved cash exchanges,
long disappearances and tinted glass.

Ping Pong diplomacy—a diorama
of an historical event lost on us. One player
may have been Chinese and held his paddle
like chopsticks, Mr. D said.
We had seen no one use chopsticks
except in buck-toothed cartoons.

The American won, waving his tiny flag
to squeeze the sparse crowd into polite applause,
then it was on to ”Sweet Georgia Brown”
and the depantsing of a Washington General
that might’ve caused a riot if it happened
on our street. Hyperbole no longer applied
to riots, in Detroit, in ’71.

The bucket of confetti tossed like water
did not surprise us, though we laughed—
it was expected. Just like the dollar.
It did not matter what truth existed
beneath smudged dollar bills.

Back home, Mark and I practiced spinning balls
on our fingers. He mastered that trick, but never
the lay up, never the jump shot, never even
the dribble. He spun himself into dropping out
of high school, then mopped the floors
at the Salvation Army where he stored
his life in a locker and watched all our cars for nothing,
but asked for dollars on principle, winter,
layered in stink, fueled by modestly wrapped bottles.

You know who won. The white Generals
had a job to do—inept and befuddled
and engaged. The Globetrotters laughed
and hooted. We were all in on the same joke,
with different punch lines. The Generals were privates
in the army competing for the entertainment dollar.

In 1967, the city burned. Tanks on the street,
helicopters keeping the beat. The white mayor
conferred with the white governor
and the white police chief. On the edge of the city
Mark and I counted choppers in the lazy daze
of our safe street—rumors to the contrary
that they were coming to get us.

Mark thought the Globetrotters were funnier on TV,
edited down on “Wide World of Sports.” The game
couldn’t end quick enough, isolated laughter echoing
over empty seats under the roof
where the great Gordie Howe played,

though Mr. Hockey didn’t mean shit to those kids
outside. The world spun on its axis, not a long black
finger. Meadowlark Lemon was not present
but Curly Neal was. Other Globetrotters played
other Generals elsewhere. More than one Santa Claus
and no Santa Claus, no guarantees. The hubcaps were
gone and so were the kids.

Mr. DiPietro shrugged and quietly swore.
He’d left his gun at home in deference
to the occasion. During the riots,
he wore a holster, drank beer on his porch,
nodding to neighbors as they passed
as if they all shared the same secret.

We’d gotten soaked by the confetti
of a contract shredded by our daily myths.
We shook it off and headed toward
the exits. Scoreboards were useless,
as were clocks. Somewhere
someone spun a hubcap on a finger
and evaluated its worth.

On our factory street, no one trotted the globe,
though a lucky few ventured Up North
one week each summer.

The world holds its breath. Does anyone
sing along to its bouncing ball? How many
of our choices are imaginary? What I don’t know
could fill the souvenir program Mark picked up,
scattered in trash beneath a seat.

Two kids emerged from shadow to conjure
fear. Color as weapon. Fear unacknowledged
in translation. Blurred borders and a gun
left at home in consideration of us, the children.

Neither dollars nor holsters nor white skin
could save Mark. Neither of us, nor
those black kids, would ever be Globetrotters.
We were all Generals, the game rigged
for the amusement of—of who?
Who could blame everyone for picking up
“equalizers,” even if used to shoot each other
instead?

I squeezed the ping pong ball
gently in my palm like a worry stone
or silver dollar or fake ID.
He dropped us off, then drove back
to wherever he lived. At home,
I sat on our couch. Our Christmas lights
did not blink. I showed my parents.
See, I said, opening my palm:
perfect, round, white.