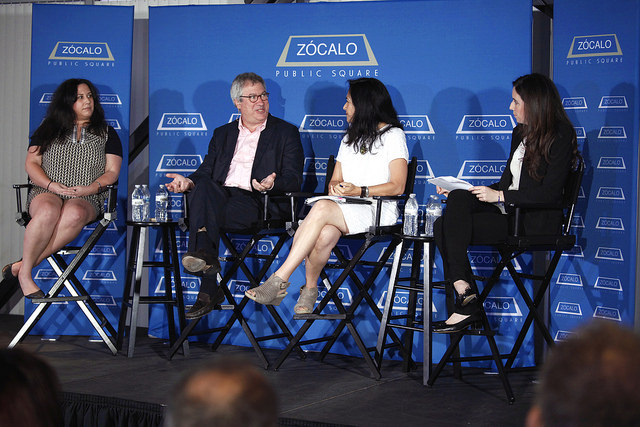 Los Angeles is the second-most expensive housing market in the country, behind the Bay Area. It’s a situation, said Wall Street Journal and Economist contributor Lauren Schuker Blum, of “housing misery.” Blum was moderating a panel on what makes Southern California such an expensive place to live—and what, if anything, can be done to lower the cost of housing here.

USC Lusk Center for Real Estate director Richard K. Green told a large crowd at the Petersen Automotive Museum that the problem is not endemic to L.A. None of the world’s 20 largest metropolitan areas have affordable housing. In Los Angeles, the ratio of median home price to median income is 7-to-1; a 4-to-1 ratio is in the neighborhood of affordability. “We’re really bad, but if you want to feel better, there are places that are worse off,” he said. That ratio is 25-to-1 in London, 20-to-1 in São Paulo and Beijing, and 18-to-1 in Hong Kong.

However, said East LA Community Corporation president Maria Cabildo, there are cities that are doing much more than L.A. to address their affordable housing crises. Here, we created a housing trust fund, for example—but we never dedicated any money toward it.

Curbed L.A. senior editor Adrian Glick Kudler said that there are lots of opportunities to make housing more affordable in L.A. For one thing, there is still plenty of land that can be built on. And we can also start building around transit in order to make dense living more practical.

Green attributed this to misguided environmentalism and the region’s culture. There’s a tendency to think that being pro-development is bad for the environment, but that’s not necessarily the case. In a city with so much air pollution, more density—with people living closer to work and driving less—can be more environmentally friendly. Plus, L.A. is a single-family-housing city, where people want their own yard and pool. It may be the second biggest city in the country, but people here are accustomed to the single-family-house lifestyle.

Cabildo said that there’s also a culture of Nimbyism in Los Angeles that makes building affordable housing particularly difficult. Councilmembers are too concerned about backlash to support affordable housing. Residents want their neighborhoods to stay the same. However, she believes that demographic shifts—the younger generation doesn’t necessarily want the pool but does want to commute by bicycle and public transit—could present opportunities for the city.

How, asked Blum, did Los Angeles get so expensive?

Green said that Los Angeles stopped being affordable in the mid-1970s. Part of the problem is Proposition 13, which froze property taxes and has discouraged people from moving. The law keeps the inventory of housing low—especially problematic as the population grew in the 1980s and 1990s. And, even at the height of the housing bubble, Southern California just didn’t build enough units to accommodate the number of people here.

Cabildo said that in the same period that rents went up 25 percent in Los Angeles, wages decreased by 9 percent. In the past, you could have a job as, say, a grocery store worker, and have a nice house in the Valley. But that is no longer a good middle-class job, and that housing is no longer affordable. “Incomes are not growing,” she said, and it’s the middle of the market that’s “getting squeezed so tightly.”

Why have rents gotten so high?

Kudler said that buying a house has become “basically unattainable” except for people in the upper-middle class or above. The median cost of a house in L.A. is now nearly half a million dollars. At the same time, the housing crisis pushed a lot of people back into the rental market. Today, more than half of all Angelenos are renters. All that, combined with limited housing stock and the difficulty of building anything but the fanciest apartments, has driven rents way up.

Where are people who are being pushed out of Los Angeles going? You hear about people moving to Texas, said Blum; are they really?

Green said that the net migration from California to Texas is positive but still just a tiny share of the population of both states. There are certain groups that are leaving Los Angeles: The African-American population has been “dropping like a rock for the last 30 years,” he said. Many people who are priced out of L.A. are going to the Inland Empire, which has grown faster than almost any other place in the country. Yet there are no jobs there. So the people moving to San Bernardino and Riverside counties are often still working in Los Angeles and Orange counties—and dealing with miserable commutes.

Is there anywhere in Los Angeles where first-time buyers can afford a house?

Kudler said that she gets the question all the time, and it’s always impossible to answer. Highland Park is a place people often mention, but houses have started selling for a million dollars there. All the northeast L.A. neighborhoods are on their way to becoming unaffordable, including Boyle Heights. The Sears Tower project currently in development there which will have 1,000 apartments and no affordable housing units.

“South L.A. is still reasonably inexpensive,” said Green—but it won’t be forever. He pointed to Brooklyn as an example of a place that was perceived as undesirable for years, then got tremendously expensive over the course of the last two decades.

What can be done, asked Blum to bring rents and prices more in line with people’s incomes?

Cabildo said that the amount of money available to build affordable housing in California has declined drastically over the past several years. The state needs to “look at additional sources to incentivize and pay for the construction of affordable housing,” she said. Some cities have put in place “linkage fees” that charge developers fees on their commercial, industrial, and residential development that are used to pay for affordable housing. This is one policy L.A. would do well to emulate, she said.

Green disagreed, saying that subsidies don’t work well because they’re going to be small and because they make housing more expensive for everyone. Low-income Section 8 housing works well in most of the country, but it raises rents for the entire city in Los Angeles, San Francisco, and New York City. A better model, he said, is Hong Kong, which subsidizes the housing of 50 percent of its residents one way or another. This means that there’s housing for waiters, policemen, and other service workers—in a city where private-market units cost $1,000 per square foot—and that there’s no stigma attached to subsidies.

What about building more high rises?

And, said Kudler from her conversations with politicians and others, she knows that “nobody wants to abandon single-family housing in L.A.” The fact is: “There’s no political will for it. It’ll never happen,” she said. 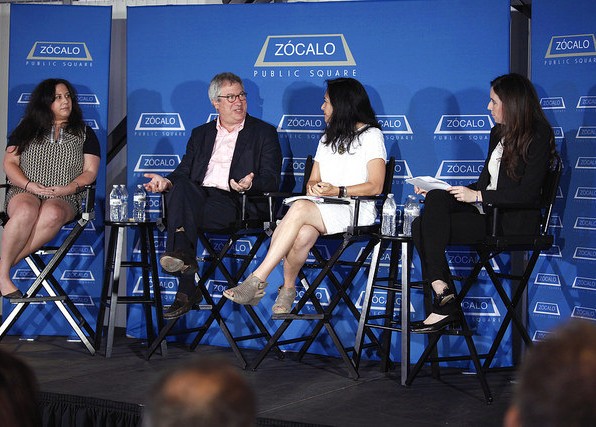 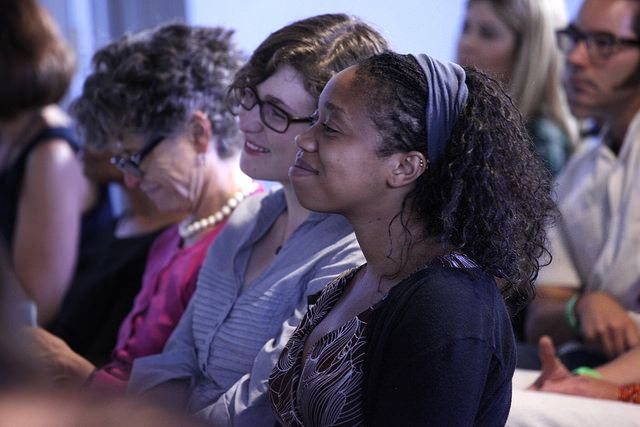 A large crowd came out to the Petersen Automotive Museum 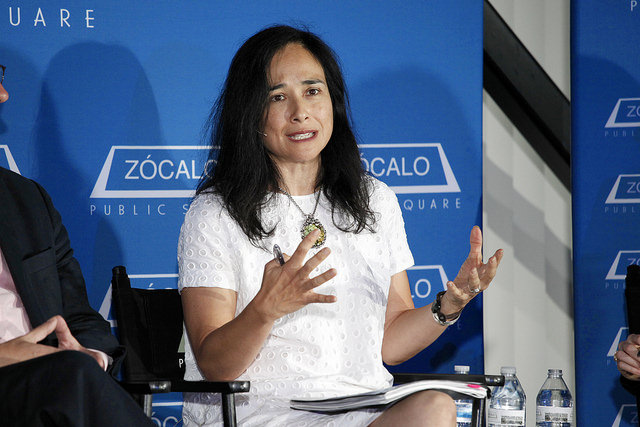 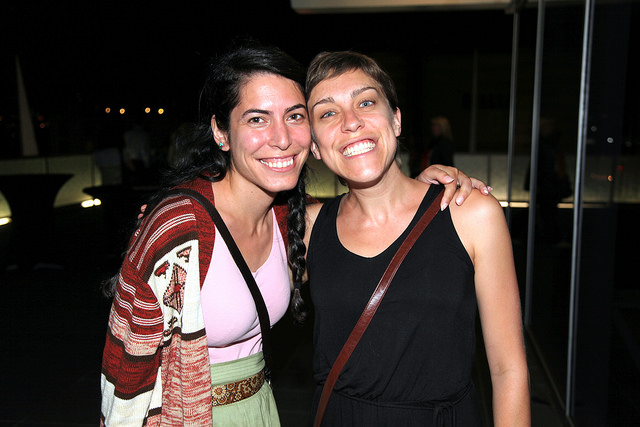 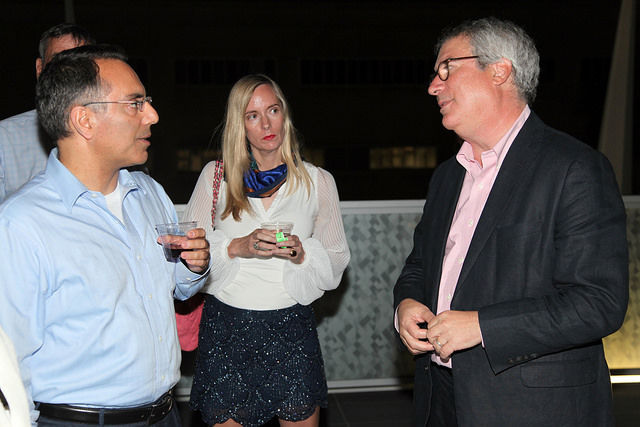 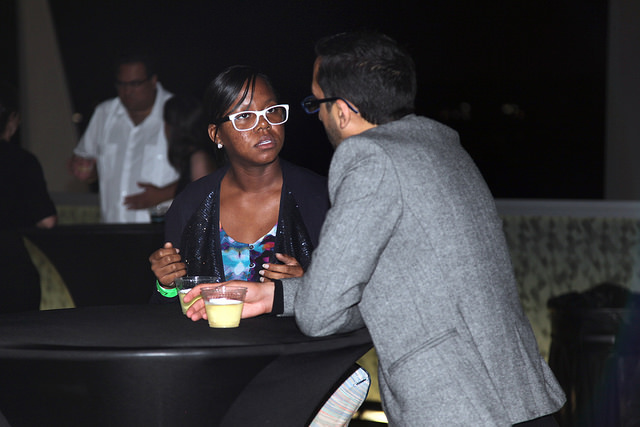 Chatting over a glass of wine after the program