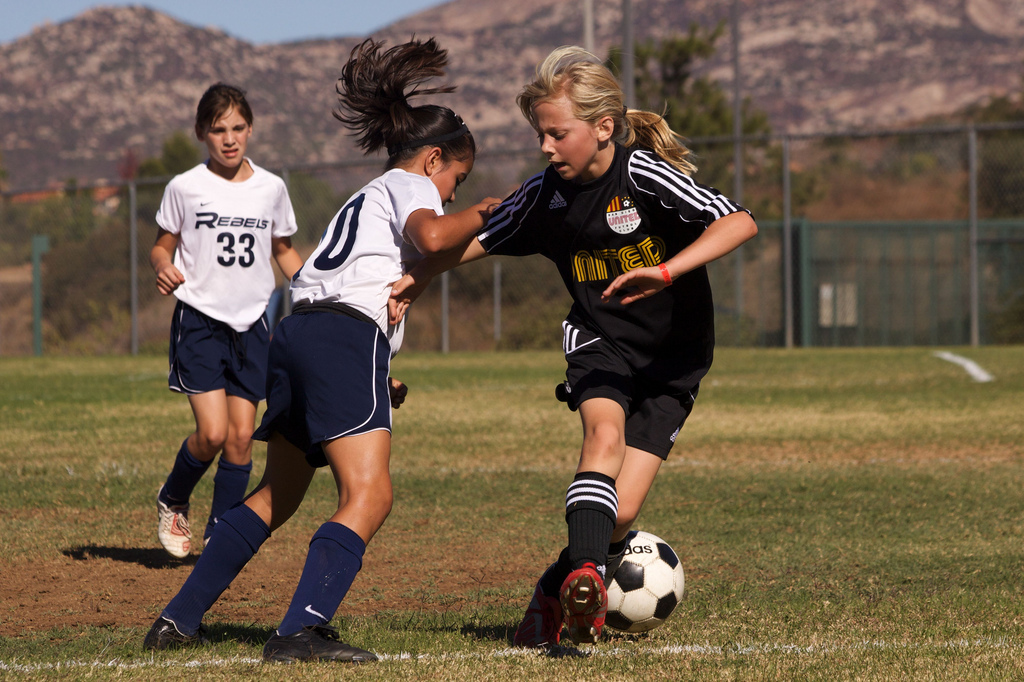 I grew up in Minnesota in the 1960s and ’70s, before the passage of Title IX—the education amendment that provides for gender equity in athletics.

Had I grown up in my daughter’s world, in California over the last 20 years, I might have recognized that I was an athlete. Instead, it’s been the experience of raising my daughter in the more open, post-Title IX world of organized sports that has helped me understand that I really was a jock all along—and prone to sports zealotry.

I fulfilled my high school P.E. requirement with seasonal rotations of badminton and bowling. Outside school, I ran, biked, rode horses, and worked at a stable, where I could stack hay bales with the strongest of the guys. I learned to vault on and off a galloping horse, ride backward or standing upright on the saddle, leap from one horse to another at a full run, and play equestrian capture-the-flag in all kinds of extreme weather. I was part of an equestrian drill team that performed at summertime events like the Corn Days Parade.

But I didn’t play team sports, since little was offered for girls outside school. And I never thought of myself as an athlete. In fact, my recreational activities made me something of an oddball. Once when I was jogging, a farmer offered me a lift. He assumed I was in a hurry: Why else would I be running down a country road?

In the early 1990s, I moved to L.A. and had my first child. When Zoe was about 7 years old, she asked if she could play soccer. At the time, I was totally unaware that a whole industry of youth sports had sprung up around me: American Youth Soccer Association (AYSO), Little League, YMCA basketball.

A year later, with the help of a more experienced mom, I signed Zoe up for AYSO soccer. She took to it like the proverbial fish to water, or in her case, like a little Mia Hamm to a World Cup penalty kick. I was surprised by Zoe’s speed—Where did she get that?— her precision, and the agility of her moves.

She went straight to the All-Stars Under-10 team. I went more or less straight to becoming a fanatical fan.

On the morning of Zoe’s first all-star tournament, we planned to leave at 5:30 a.m. to arrive in Riverside at 7 a.m. When I opened my eyes at 6:05 a.m., I lay still for a moment, processing my disbelief. Late. Then the adrenaline kicked in, and I flew.

I had a lot of packing to do: soccer balls, cones, cleats, water bottle. Towels, change of clothes, warm boots. Band-Aids, Emergen-C, Advil. Food, drinks, ice. I leapt from bed, sprinted down the hall, grabbed my daughter by the shoulders, and shook her from sleep before darting to the kitchen to fling things into the cooler. Half done, I sprinted back to the bathroom. I had just pulled on jeans and a sweatshirt when I saw my husband’s lumbering form coming down the dark corridor. “What are you doing?” he asked, incredulous. “It’s 1 a.m.!”

Zoe climbed back under the covers, fully dressed by then in her uniform, shin guards and all, and went back to sleep.

We made it to that game on time, of course, and to all the others in the years that followed. But I’d officially earned the title of Psychotic Soccer Mom, and I’ve haven’t been able to shake it since. I’m so glad.

Of course, there are good and bad psycho soccer moms. The good ones cheer on their young would-be Olympians, though often to excess. The bad ones do, too, but they also jeer at players and yell at the referees. Both spend big chunks of their lives in far-flung places, forgoing ordinary weekend tasks like laundry and grocery shopping in favor of spectating. Both can be loud and OCD, with noisemakers and banners and spreadsheets of game times. And both live vicariously through their kids, the good soccer moms with wonder and hopeful expectation, the bad ones with jealousy and dogged determination.

I hope I’ve been one of the good ones. I’ve given years of my life to being a soccer mom, and in the process have deepened my relationship with my daughter, who is now 21, in ways I couldn’t have anticipated.

The truth is, my daughter’s engagement with sports has really rocked my world. It’s been a revelation to see how her experience has been so rich with lessons in self-discipline, teamwork, courage, and grit. I’ve seen her give her all to the game in driving sleet and hail, and in scorching desert sun. She once kicked a winning goal when she had a flu and high fever. She’s suffered blisters, abrasions, and broken bones that have kept her on the bench. But she has still gotten up in the dark just to be with her teammates. She has embraced, with blood and guts, what it means to be strong, fierce, and unwilling to accept defeat.

There are other ways to learn these lessons, to be sure, but not so many or often for girls as for boys. We expect our boys, in the course of their daily lives, to be rough and tumble, to get the wind knocked out of them before they get up again. But for girls, organized sports have provided the best arena to test their mettle.

I’ve stood on the sidelines for all kinds of competitions—soccer, baseball, basketball, softball, swimming, flag football. I have a son, too, and have spent countless, amped-up hours at his games. I love witnessing the whole fervent band of brothers camaraderie.

But I feel more like a visitor than an inhabitant in his world—perhaps because I’m a mom and not a dad, or perhaps because his experience better conforms to my preconceived ideas about boys in sports. But mostly, I think, because I am startled by a recognition of my daughter’s experience as one I, too, might have had 40 years earlier.

I think I have gleaned some of the same lessons over the years, of endurance, strength, and tenacity. But I have done so by other means, and over a longer arc of time. I would have loved learning them, like my daughter, on the soccer field.

Now that it’s August, AYSO soccer season is starting up again. I’ll wander up to Culver City’s Lindberg Park and enjoy the little-girl mayhem of the Red Hot Tinkerbells team, 6-year-olds charging like blazes down the field toward the wrong goal. And then I’ll wait, impatiently, until next summer, when the Women’s World Cup gets underway in Canada. Warrior women on the soccer pitch. I’ll be there. And though she’s abandoned her Mia Hamm aspirations to pursue a career in science, maybe Zoe will, too.