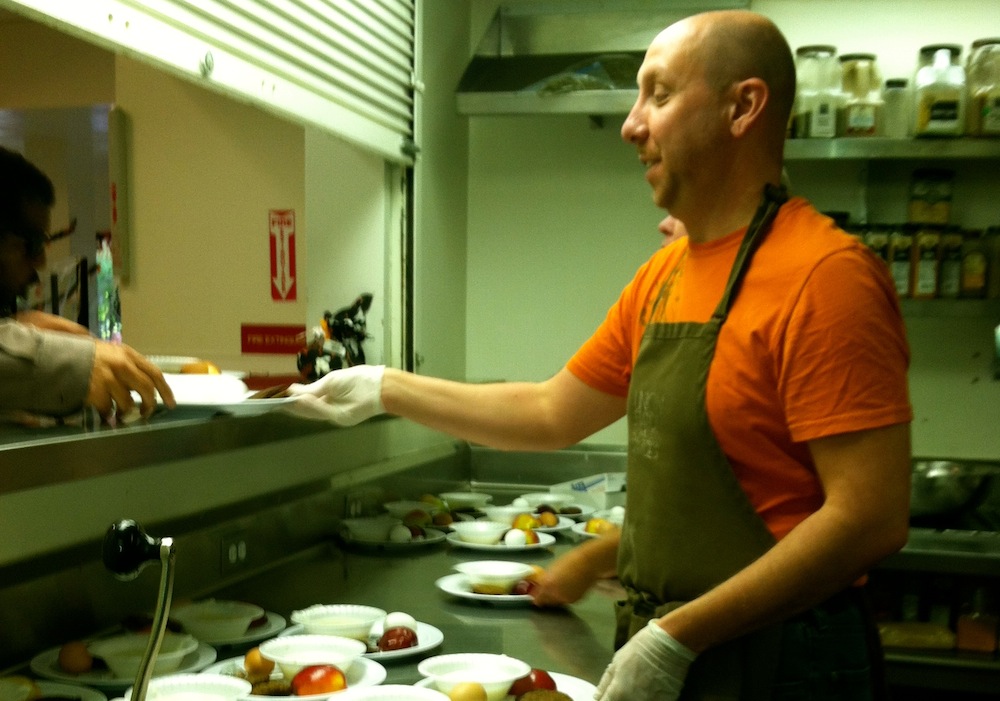 In the spring of 2009, my teenage daughter and I attended a memorial service in Pasadena, California, followed by a family-style luncheon. After the service, the retired clergyman who had officiated was holding a plate in one hand and arranging leftovers onto it. The plate was teetering on the edge of the very full table; I walked over and asked if I could help.

I assumed he was preparing food for the family to eat later in the day. Instead, he told me the sandwiches were going to nearby apartments of elder adults who had very limited access to food. He said this would likely be their meal for the day.

I asked if I could visit the seniors he was helping, maybe bring a casserole or some flowers to cheer up their day. And so the following Monday morning, my friend Marie and I brought little tuna casseroles and cupcakes, and joined the clergyman on visits to three apartments within three miles of my house.

Each stop went from bad to worse. The first apartment, a block from the Rose Parade route, was home to a lovely woman whose hands were crippled by arthritis and whose back was curled over. She could only push buttons on her microwave and use pop-top cans. The second apartment wasn’t much better. The third apartment stank of stagnant air and animal feces. A very thin woman with extremely swollen ankles the size of baseball bats and large eyeglasses sat on a bare daybed mattress with no sheets or blankets. Her closet door was open, and only one dress was hanging in it. She offered us water–apologizing for having nothing else to share–and said that the glasses were in the cupboard. We found just one glass and nothing else but cans of cat food. Her fridge was empty.

We chatted about the weather and the TV show she’d been watching, but my head was spinning, and I couldn’t focus. It felt like hours had passed, but it was only minutes. I’d walked by this building a hundred times, coffee and cell phone in hand–often on my way to or from a meal.

As I stood with my hand on the door, I felt I had to make a decision right then and there. Do I do nothing and let this be someone else’s problem, and feel pain and intense guilt when this woman dies from neglect? Or do I get involved?

An hour later I dashed into Trader Joe’s in South Pasadena and shared my shock at what I’d just seen and experienced. A wonderful man named Joe–not the Trader Joe–told me to come back on Wednesday. He would help me get some easy-to-open items that the people I’d just visited could eat.

Joe was as good as his word. He helped fold down the seats of my Prius and loaded dolly after dolly of fruits and boxed vegetables. He explained that this food was excess, and the store donated it to make room for newer shipments. (I would learn later that other grocery stores–but not all–do this and more) There was so much food that I could only make left turns; I couldn’t see out the other window.

I soon learned more about the 49 million Americans–one in six of us–who are unsure of where their next meal will come from. I also learned that grocery stores and many food-derived businesses discard their excess unexpired food daily instead of donating it: Up to 40 percent of the food produced in the U.S. is wasted. My big question was: Where did this discarded food go, and how could we get it to struggling people like those I had met in my neighborhood?

For the next two and a half years, I made weekly pick-ups at Trader Joe’s and delivered food to organizations in the Pasadena area, including the AIDS Service Center, the Union Station Homeless Services, and Holy Family Church’s Giving Bank. Meanwhile, I learned everything I could about food waste.

In spring 2010, I attended a convention in San Diego on organics recycling and sustainability to gain an overview of the waste industry. I wanted to be able to have a respectable conversation if a food supplier chose to not donate edible food. For three days, I was a human sponge, absorbing information about sustainability, composting, and renewable energy. The waste industry didn’t particularly care about feeding people, but I gained an enormous amount of respect for its passion and commitment to efficiency and reducing waste. The people I spoke with cared as much about preserving the same pristine organic food I was interested in, just for different reasons.

When I got home I reached out to local agencies in need of food: homeless shelters, churches, food banks from Long Beach to the Westside, senior centers, children’s homes. I asked them how often they needed donations, and whether they required food to be prepared and pre-packaged or if it could be kitchen-made. Then I approached the health department about food safety regulations. Through these meetings I realized that it wasn’t as simple as taking food that one place didn’t need and delivering it to where it was needed. Donating food, I discovered, had a unique set of rules that were outdated and hadn’t been adapted for today’s state-of-the-art methods of heating and cooling food.

I realized the process could be made much more user-friendly so that more cities and companies would want to participate.

In 2012 I founded Urban Harvester, a Los Angeles-based 501(c)3 nonprofit organization. Our focus is getting untapped food resources to the nearest shelter, soup kitchen, and pantry. We designed a scalable model that includes education and outreach to bring communities and businesses together.

We don’t have a fleet of trucks or a facility; our goal is simply to connect the dots. We are like a dating service bringing together food and the agencies that need it. Today we are partnering with 211 LA County—a countywide network that includes 49,000 city, county, public assistant, and nonprofit programs–to try to connect to more agencies for our food work. 211 LA County is part of a larger national network of programs that serve 93 percent of the country. Today, this connection work is done personally and locally, but we have built a database and are using technology to build up a system to connect food and agencies that need food at any hour and across the world.

All types of food suppliers are now involved–not just grocery stores but restaurants, food trucks, Starbucks, the South Pasadena Unified School District, a music festival, a temple, a farmers market, and many wonderful food retailers that prefer to donate food quietly. Just a few weeks ago, we proposed and won unanimous passage from the South Pasadena city council of our first resolution: Businesses, instead of disposing of edible extra food that is professionally prepared, are encouraged to connect the food to local agencies. Our goal is to keep taking big steps, albeit one at a time, to help people with their basic needs.