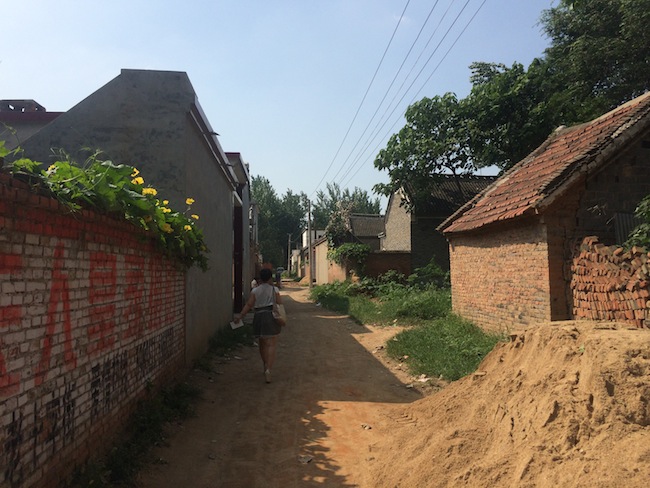 The village where Kang lives is as far removed as one could possibly get from New York, where I now live. It is located outside of Shangcai, a small town of smelly hotels and dirty restaurants, which is itself an hour-long bus ride away from Zhumadian, a fourth-tier city in Henan Province. The birthplace of Chinese civilization and home of the renowned Shaolin Temple, Henan is now one of China’s poorest provinces. In the past two decades, its main claim to fame has been the high concentration of so-called “AIDS villages” near Shangcai devastated by an HIV outbreak in the 1990s.

So when Kang asked me about New York, I was not sure what to say. I was traveling in China for the summer researching my next documentary film, and I was meeting him, his wife, and another young man for the first time over dinner. Henan cuisine does not have a great reputation in China, and the sputtering lights and the grimy walls of the restaurant made the steaming dishes even less appetizing. Kang played with his smartphone nonstop as the conversation progressed in fits and starts.

He operated extractors on construction sites for a living, so he was tanned like tar. His dark pants, rolled above his skinny ankles, were splattered with mud stains. I mentioned the Empire State Building, the Statue of Liberty, and the sunny summers in Central Park. Lots of Chinese tourists go there now, I said, and the rich ones buy real estate in cash and Louis Vuitton in bulk.

“Why is New York so famous?” he asked. His wife, Fei, turned toward me but avoided meeting my eyes. She had the delicate features of a city girl, but her dress was of the simplest and cheapest kind, normally associated in Beijing with a migrant worker newly arrived from the countryside.

“New York,” I stammered, “is a place of many different people, still full of opportunities for those who want to make their lives better through hard work.” Then I stopped talking and worked on my beer, since America felt like a topic entirely out of place, in front of people who might be stuck in this dirty little town for their entire lives. 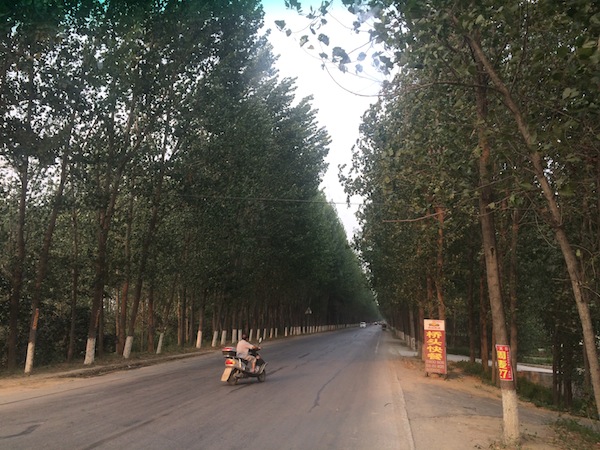 When I met my friend Chung To in Beijing at the beginning of the summer, he encouraged me to visit Shangcai. Chung To heads the Chi-Heng Foundation, a nonprofit group assisting children impacted by AIDS. Initially I was reluctant to go. I told him I wasn’t looking for sad, teary stories—those have been done. I wanted to continue my exploration of China’s growing aspirations, as in The Road to Fame, my latest film about students at an elite acting school in Beijing.

Then you definitely need to go to Shangcai, Chung To insisted.

But Shangcai, geographically in the center of the Middle Kingdom, didn’t seem at all representative of the new, prosperous, and ambitious China. At first glance, Kang and Fei couldn’t be more different from the urban youth I had come to know. In big cities, young people don hipster fashion from Japan and South Korea, watch American TV shows online, and chatter as loud and fast as their American peers. They want the latest iPhones, a nice apartment, and a fancy car, and to live a life full of the material riches portrayed on American TV shows. Here in Shangcai, the young people appeared tentative and ill at ease, like underdeveloped kids still in high school, or even middle school.

What sets the young people of Shangcai apart is that they grew up not only in poverty, but also in the shadow of AIDS. In the 1990s, villagers around Shangcai sold blood to commercial–and mostly illegal–blood collection agencies to make ends meet. Needles and tubing were reused, and once the desirable plasma was removed, red blood cells were pooled and reinfused to the donors to prevent anemia. Thousands were infected with HIV. Newly infected mothers passed the virus to their babies through childbirth and breastfeeding, and kids and adults contracted HIV after receiving contaminated transfusions in hospitals. In 2000, the HIV infection rate in Wenlou village outside of Shangcai was as high as 65 percent. People started dying, the healthy shunned the sick, and the government clamped down on any reporting of the dire situation around here.

Kang was diagnosed with AIDS in 1999, when he was only 5 years old, having contracted the virus from his mother. His mother sold blood to help pay fines imposed by the village family planning agency. Despite the Communist government’s long-standing one-child policy, his father insisted on having a son, even though he had already had four girls. Three years after his diagnosis, his mother passed away, and Kang grew up going in and out of hospitals. Both of his wife’s parents had been similarly infected from selling blood. The other young man at our table, who fixed computers for a living, had contracted the virus through a plasma transfusion in his early teens.

I felt awkward prodding them for their sad stories, so I tried some small talk, but that soon fizzled. It’s impossible even for an optimist to find hope where none apparently exists. But things in Shangcai have improved some. The government eventually acknowledged the AIDS epidemic in Henan, allowed reporters to investigate, and instituted free prevention and treatment programs. Commercial blood selling disappeared. Despite early corruption in the distribution of free drugs, treatment programs seem to have brought the disease under control. HIV patients now receive government subsidies, and warily, local governments have allowed groups like Chi-Heng to help children infected with HIV or orphaned by AIDS to go to school. But many have died, and survivors have been scarred. Nowadays, few reporters visit Shangcai, and contrary to Chung To’s promises, everyone seemed eager to leave these sad, teary stories behind.

The next morning I woke up late and went to Kang’s home in the village with Liu Li, a staff member from the foundation conducting routine visits to families afflicted with AIDS. I thought of backing out, but the trip had been pre-arranged. It was a clear and muggy July morning. Dirt roads cut through the village, their surface chopped into deep ridges by past rainfalls. The cicadas chirped merrily and, surprisingly, most of the houses looked well-kept and clean. As soon as we arrived, Kang’s father and stepmother–who had lost her ex-husband to AIDS and was herself HIV-positive–served us tea and cleaved open a watermelon. It was grown on their own land. “All organic,” they emphasized.

Chewing on watermelon, Liu asked about the patients’ drug regimen. Kang muttered something about the drugs’ side effects. Here in Henan, the free drugs do not include the newest, more expensive kind. So whenever the medication made him sick, Kang stopped taking it, which affected his white cell counts and made him a frequent visitor to the hospital. Fei said her own mother had stopped taking the drugs altogether. She had begun believing in Jesus, like many desperate souls in the countryside, and decided to leave her fate to the Almighty.

Liu gently reprimanded them and then asked about Fei. “Oh yes, of course she’s taking her drugs religiously.” Everyone chimed in eagerly, the loudest being Kang’s father. He was half-naked and his body, massive and sagging, was heavily tanned from farm work. He pointed at Fei’s tummy–that’s all we worry about now.

Kang frowned slightly and stole a glance at his father. He and Fei had only been married for six months; Fei had gotten pregnant by accident two months ago. At dinner the night before, he’d mentioned not having wanted a baby so soon. His wife had wanted to travel and see the world a little first. But in the village, 20 was considered the right age to procreate, and no one was sure how long Kang’s condition would remain stable.

Liu reiterated that with the cocktail regimen, it was very likely the baby would be HIV-free and live a long and healthy life. A big grin appeared on Kang’s father’s face. “I want at least three grandkids,” he said. Kang frowned again and mumbled, “One would be enough, ’cause it’s expensive now to raise a kid properly, if one wants to raise a kid like the city folks.”

The old man ignored him. He said that during the years when Kang was very sick, in and out of intensive care, he sold everything to pay for his treatment. He stopped working and started drinking. He said he had given up all hope. Now–he pointed at Kang excitedly–his son was healthy again, and a grandkid was on the way. The bloodline was being continued. He might enjoy work again, enjoy life again. His family owned about one acre of land, and he rented another two from neighbors, which he farmed all by himself. There were some in the village who milked the government’s AIDS-care programs so they didn’t have to work. “Dishonorable,” he said. “In this family”–he waved his hand for emphasis, a big slice of watermelon held firm between his fingers–“we have to rely on our own hands and do honest work.”

The conversation grew spirited, and a cool breeze wafted through the room. I surveyed their animated faces and their bare-bones living room, and marveled at the new table and chairs built of sturdy wood. Here, in an average village house, a poor Chinese family has struggled with HIV for 15 years. Their hearts have been broken, and their families have died. Outside the village they are still being discriminated against, forced to obfuscate about their origins. Yet tenaciously they hold on to the hope of a better life, like other Chinese who had to wipe away the scars of the Cultural Revolution, or the older generations who migrated to America for the promise of the Gold Mountain.

Before I left, Kang and Fei showed off their wedding photos. Like all marrying couples in China, they had hired a professional cameraman to take glamour shots. With the help of Photoshop, Kang’s face, tarred by the sun and scarred by lesions of Kaposi’s sarcoma, appeared clean. In their brightly colored costumes, he and his wife looked just like any other young Chinese couple, hopeful, unhindered by past tragedies. I remembered what Chung To had told me at the end of our coffee: People like them are the foundation of a nation’s dreams.

Walking us back to the road, Kang and Fei held their hands together like high schoolers fresh in love. Kang asked if I felt tired traveling all over China finding new stories. I said no. To be able to hear their stories is a privilege in itself.

“I wish I could do what you are doing,” he said, “going around the world and seeing new things.”

“Why couldn’t you?” I asked, wondering even as I blurted it out whether that sounded too insensitive.

He thought for a bit. “Indeed,” he replied, “why not? Once we have had the baby and saved enough money, we’ll go travel. Maybe we’ll even travel to New York to visit you, to see what the fuss over America is all about.

At that moment, squinting his eyes in the sun and waving at pedicabs to take us back into town, he sounded just like anyone, in Shanghai, Beijing, or New York, whose future was not guaranteed yet remained well within reach.