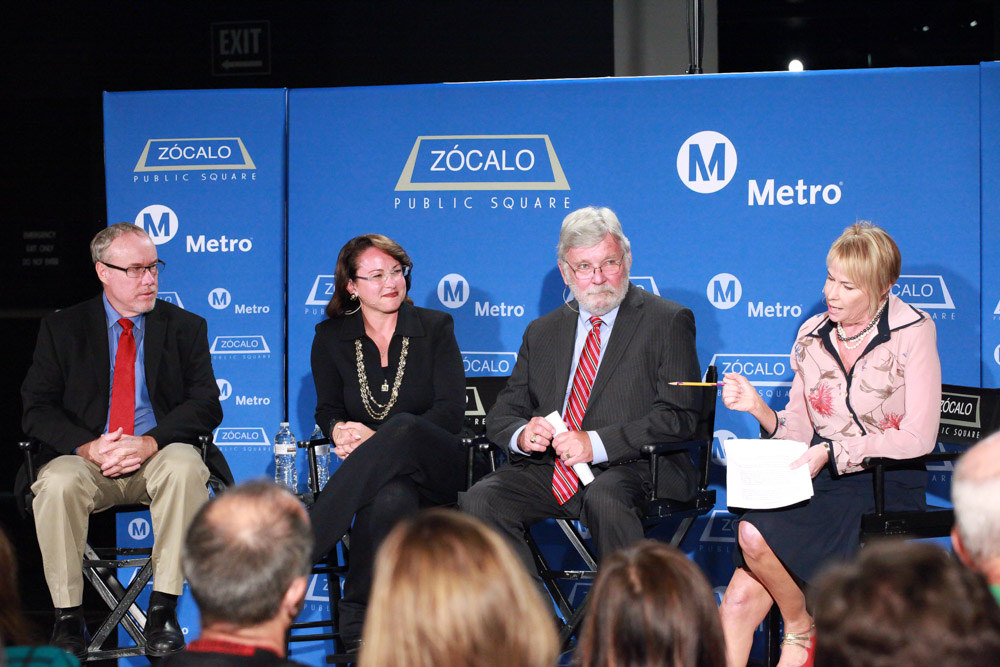 The Los Angeles Times has said that we’re living in a golden age of public transportation in Los Angeles. But try telling that to the people stuck on the 10 and 405 freeways at rush hour. Are new train and bus lines decreasing the number of cars on Southern California’s roads? Will technology speed up L.A. traffic? And how will Measure R investments in transit—funded by a sales tax increase—change how we get around? A panel of transportation experts addressed these questions at an event co-presented by Metro in front of a full house at the Petersen Automotive Museum.

Metro CEO Art Leahy—whose parents operated Los Angeles streetcars and who started his transit career as an L.A. bus driver—said that much of the progress L.A. has made in combating traffic is thanks to collaboration with and inspiration from other cities around the country and the world. “Los Angeles has the biggest transit development program in the country,” said Leahy. And the past few decades have transformed the city.

Brian Taylor, who directs UCLA’s Institute of Transportation Studies, said that a few of L.A.’s most successful transit innovations come directly from Latin America: the Orange Line bus and the rapid bus system.

But a lot of Angelenos still don’t think we’re doing enough to get people off the roads and onto public transportation. KCRW traffic reporter Kajon Cermak, the evening’s moderator, said that she’s often asked why L.A. is adding carpool lanes instead of light rail.

The answer is partly financial, said Leahy. Carpool lanes are federally funded. And it’s simply impossible to build rail everywhere. For example, it would cost “several billion dollars,” he said, to build a rail line over the 405.

“It’s not a good idea to think about rails and freeways together,” said Taylor. Freeways segregate traffic from the rest of the city in order to move people great distances. But on public transit, people need to be able to walk from their starting point to their station, and from the next station to their destination.

Transforming carpool lanes into express lanes—which solo drivers pay more to use during peak hours—has made a difference in L.A. traffic. Hilary Norton, the executive director of Fixing Angelenos Stuck in Traffic, said that L.A.’s express lane program “is the envy of the nation.” Revenue from express lane tolls have been invested back into transit and other projects, and people from around the country visit L.A. to see how this system works.

People get frustrated when they see four regular lanes backed up and two express lanes where traffic is flowing freely. But this is because most of us don’t understand how traffic works, said Taylor. Traffic flows freely until a road gets near capacity; at that time, adding just a few cars creates a huge backup. So while it appears that the express lanes are underutilized, they may in fact be close to capacity. On the 91 Freeway between Corona and Anaheim, said Taylor, 44 percent of drivers are in the two express lanes, while 56 percent of drivers are on the four regular lanes. Yet the express lanes still move much more quickly.

Los Angeles, said Taylor, is a city defined by images others impose on it: It’s the world’s most sprawling metropolitan area. No one uses public transit in L.A. It’s a car city. In reality, however, L.A. is the most densely populated urbanized area in the country. (L.A.’s suburbs are much denser than New York City’s.) The average resident of L.A. drives less than the average U.S. metropolitan resident, and our per capita ridership of public transportation is on par with Baltimore and Seattle.

So what can be done to improve how people see public transportation in Los Angeles?

Leahy said that Metro is training young people to use public transit, including through offering field trips by bus to places like museums.

Norton said that events—like Made in America, the concert at Grand Park that many people traveled to by train, and Dodger games that have shuttle service—give people options, and is how hearts and minds will be changed.

But is there any realistic way to eliminate traffic entirely?

Taylor said there are three ways to end congestion—all of which are politically unpopular. One is to add massive amounts of new capacity, which costs impossible amounts of money and creates a dystopian atmosphere. The second is to put severe restrictions on driving. The third is to put a price on capacity. Without doing any of these three, the next best option is the one L.A. has adopted: providing people with a wide range of options.

In the question-and-answer session, the panelists were asked how housing affordability affects traffic patterns.

Taylor said that housing and commutes affect traffic less than we think. The percentage of vehicles on the road for commuting alone is just 15 percent. Traffic is caused by people running errands during rush hour on their way to and from work. This can make it difficult for people to rely solely on public transportation.. Even if you work and live by two different stops, you still have to get to daycare and the dry cleaner and the store somewhere in between.

Norton said that housing affordability is an issue for a lot of Angelenos: nurses in Monterey Park who commute to Cedars-Sinai, people from El Monte who work at Santa Monica hotels, and LAX workers who can’t afford to live by the airport, for instance.

Is there an affordable technological solution to our clogged freeways?

“The key word is ‘affordable,’” said Leahy. “There are no cheap projects out there.” One Metro plan, currently at a very early stage, is a subway that would run under the Santa Monica Mountains from somewhere in the Valley to somewhere on the Westside—but that project requires a large investment that will likely involve both the private and public sectors, he said.

Ultimately, however, Leahy’s goal is for people to be able to get to any event—a Dodger game, a play, a concert—and take the train home. 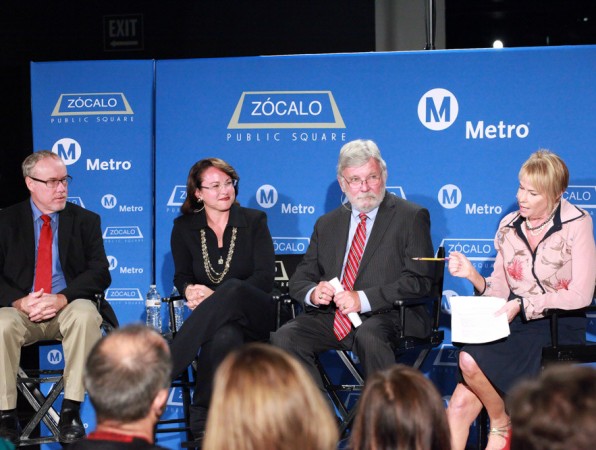 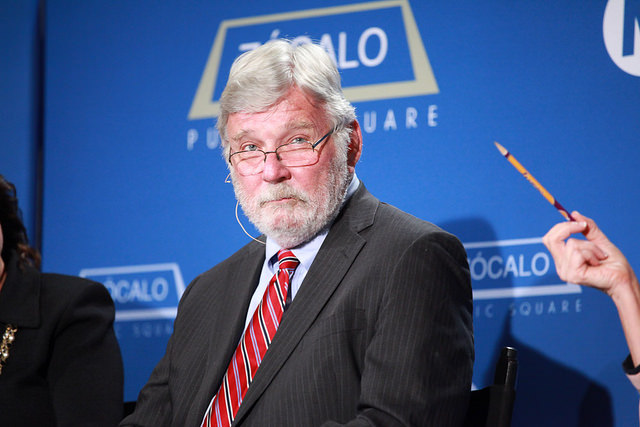 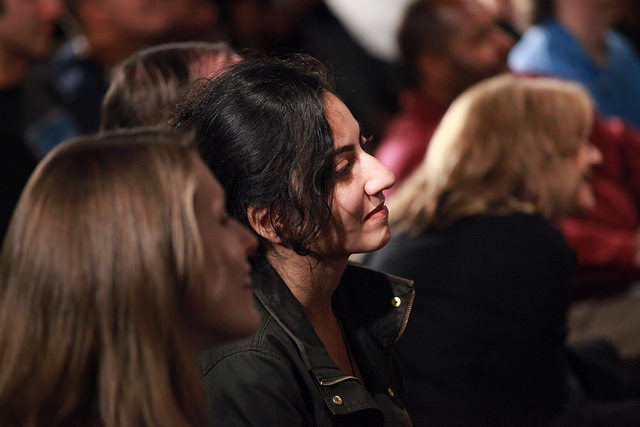 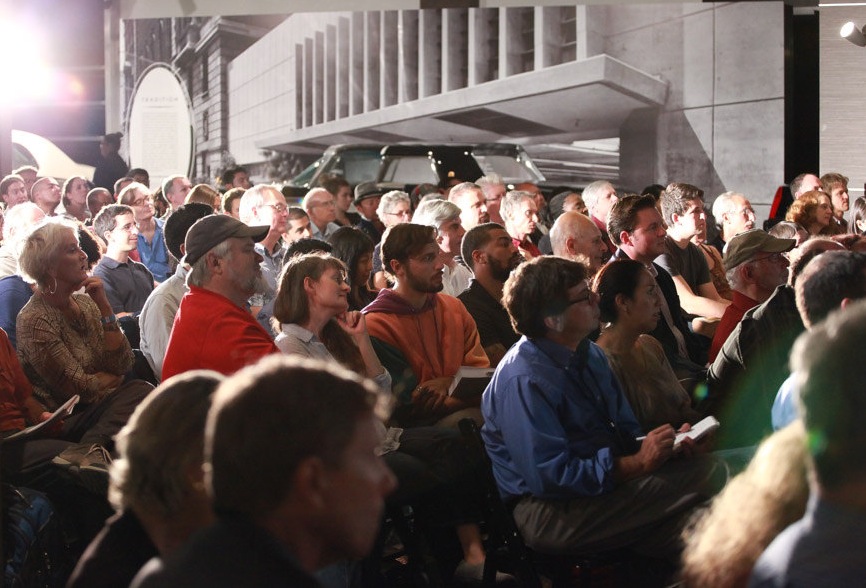 Guests filled the house (many of whom braved L.A. traffic beforehand) 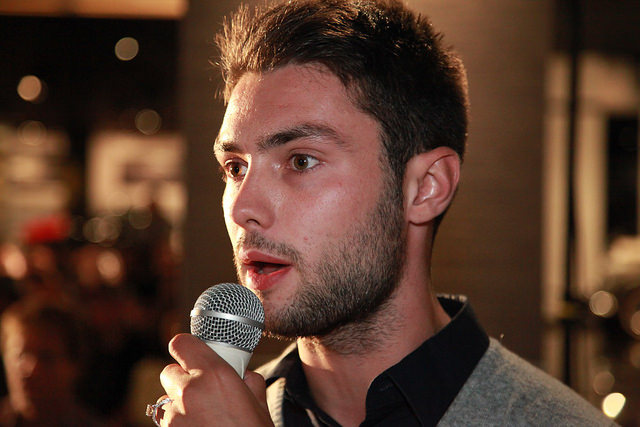 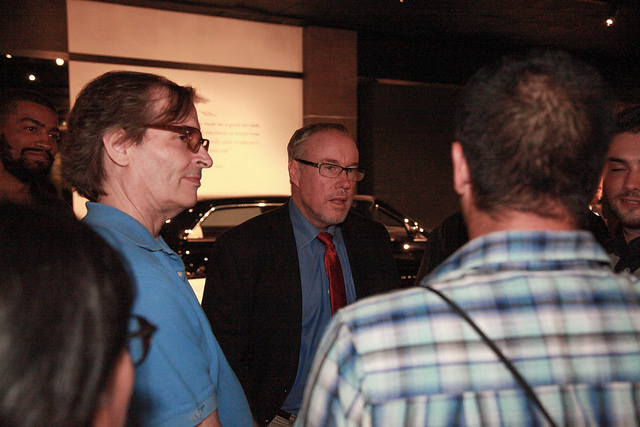