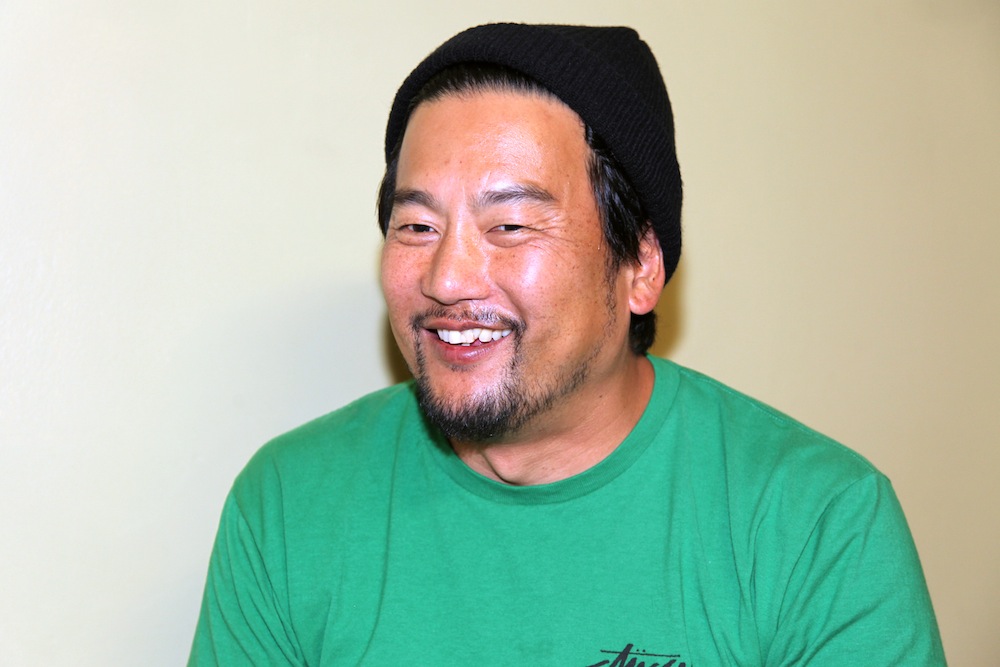 Does Roy Choi need an introduction? The chef behind the Kogi BBQ trucks and a slew of L.A. restaurants—the most recent of which are POT and Commissary in the Line Hotel—also served as a co-producer and technical consultant on the movie Chef. Before screening Chef at the Million Dollar Theatre, Choi sat down in the Zócalo green room and talked about everything from what he’d eat for his last meal (it depends on how exactly he’s going to die) to how he’d defend himself in a zombie apocalypse (if he can’t fight them, at least he can cook for them).

What weapon would you use in a zombie apocalypse?

A chef knife. Because if I can’t fight them, at least I can cook for them. I’m not really into fighting anymore. How do we know that the zombie is the enemy? Maybe instead of killing them all I can feed them all … .

What foods won’t you eat?

What’s your favorite plant or flower?

It’s changed over time. I’m in a very unique place in life right now. I’m kind of surfing between, like this physical reality and this crazy energy force—like the people loving what’s going on. So I really don’t have a fear right now. I have a fear that people may not connect to Kogi anymore. That seems impossible. So I’d say that’s irrational. Because Kogi’s really powerful, you know. I can’t imagine a world where you all wake up and don’t like the Kogi anymore.

There’s nothing because I have concrete walls, and I haven’t figured out how to put in the screws yet. But I have an office, where I have drywall, and I have prints and art pieces I’ve collected over time.

I was big into Beatlemania when I was younger. John is my favorite.

I don’t do karaoke. But when I did when I was younger, when I was partying in KTown, I went to “Careless Whisper” a lot. A lot. [Laughs.] There was like one part of it that I could hit, you know, so I rolled that dice as long as I could roll it.

It’s your last meal. What do you eat?

You know what’s weird? I imagine my death differently every time, so the meal is different. For this death, it’ll be rice, with probably kim chi stew, some tortillas. Some dried seaweed. Some pickles. Soft poached egg, maybe.

What age? Does it end at a certain age? It’s different when you’re 3 or 9. Generally I wanted to be like a topographer or a geologist. I don’t know if those were the right fields, but I knew I wanted to be someone who took people around or gave people direction. It could even have been a forest ranger—something to do with maps and finding your way.