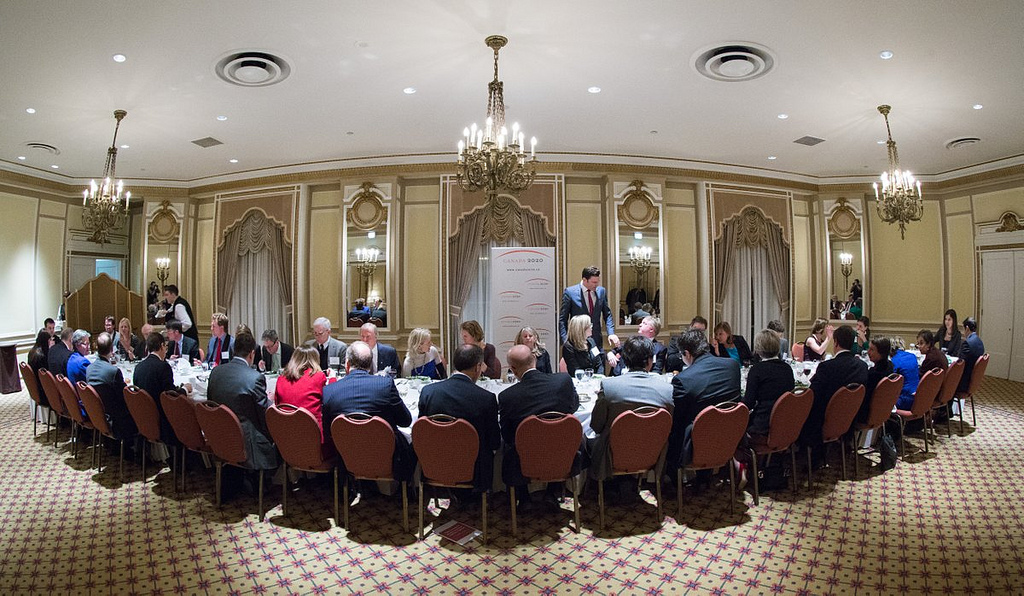 In The Comedian, Jerry Seinfeld’s movie about his craft, Seinfeld reveals he always wanted to do a skit about think tanks. The comedian, keen to deconstruct meaning, defines think tanks as: “It’s a tank … to think in …” And then he plots a skit where a think tank employee sitting in a bare room in a Rodin-like thoughtful pose is asked by colleagues if he is ready to go to lunch, only to respond that wait, wait, he isn’t done with his “work.” And then he suddenly is.

Seinfeld must have appreciated that Washington think tanks now find themselves in the spotlight, as The New York Times and other news outlets are taking a close look at the links between them and their funders, particularly foreign ones, raising the specter that they are just another form of influence-peddling organizations in disguise. I don’t think this is the case. I hope not, for my sake (I work at a think tank) and for the sake of our democracy. Most of the think tanks singled out have such diverse and competing funding bases that it’s hard to imagine them being overly swayed by any single donor. Still I confess that I’m glad that these reports have put the very important issue of institutional transparency back on our radars.

But the media attention also raised the larger Seinfeldian question of what exactly is a think tank and what is its role in our political system? It’s a question to which I have given a lot of thought, trying to come up with a better definition than Seinfeld’s crisp description. A few years ago, I was directing a growing program at a think tank—albeit one that is also a living presidential memorial and operates a bit differently than others—and I wanted to figure out how we could be more effective in our daily work. I called up colleagues at other organizations, including many I’d never met before, a few journalists, and a handful of policymakers to get a sense of when and how think tanks can impact policy issues. The results were enlightening, and I eventually wrote them down in a short book on think tank strategy.

In their most basic form, think tanks are part of the information flow in a democratic society, conducting research and analysis, and disseminating their findings and recommendations through publications and live gatherings that allow busy policymakers, advocates, journalists, and average citizens to hear diverse perspectives on important public issues. At their best they do even more, framing old issues in new ways and occasionally even coming up with actionable ideas to address some of the challenges and opportunities facing society. Harried policymakers–from cabinet secretaries to members of Congress and their staffs to civil servants implementing legislation–rarely have time to step back from the demands of the moment to conduct research and take a longer view on their portfolios. The best think tanks help break this inertia by injecting some long-term thinking and reassessments into Washington’s bloodstream.

The best think tanks also serve as hubs to bring together diverse groups that may not always speak with each other—politicians, civil servants, advocates, academics, journalists, and average citizens engaged with a particular subject. And some serve as conduits between universities, where a great deal of sophisticated but inaccessible research is done, and the larger public debate. Indeed, think tanks have proliferated in part because traditional academics often withdraw into abstract intramural scholarly debates divorced from day-to-day decision-making. The findings of scholarly research, too, are increasingly disseminated through niche publications that are hard for outsiders to use. Think tanks thus mind the gap between academia and Washington, providing a platform for researchers eager to see their work applied outside the ivory tower (which is looking more and more like an impregnable silo these days).

And much of the best work of think tanks involves building coalitions around new ideas. For instance, the Center for Global Development (one of the think tanks featured in The New York Times for accepting funding from the Norwegian government) was successful at creating a partnership among several institutions a few years ago to encourage research and production of vaccines for deadly diseases that mostly affect children in the developing world. Since drug companies had few market incentives to pursue these vaccines, the CGD worked with Harvard University, stakeholders from the governments of donor nations, and the World Bank to develop a blueprint for an advanced market commitment, in which governments guaranteed that they would buy the vaccines if produced. Today this work has led to the production of millions of doses of vaccines to save the lives of children around the world.

For a somewhat more modest project, I was involved in a very practical study a few years ago at the Wilson Center on how to leverage risk management tools to make the U.S.-Mexico border both more secure and more competitive. In the end, we involved two Mexican think tanks and the Los Angeles-based Pacific Council in producing two studies, which engaged key national, state, and local policymakers, business leaders, and civil society representatives on both sides of the border to come up with a blueprint for intelligent border management. Today, many of the ideas have become common practice, make the border more secure and improving the economy at the same time.

There are hundreds of other examples of think tank ideas that have effectively found their way into policy, largely because they have built coalitions of thinkers and doers, often drawing on the resources and knowledge in academia while engaging key stakeholders. The Brookings Institution, for example, has had a major impact in stimulating practical innovations to make U.S. cities better managed and more resilient; the Center on Budget and Policy Priorities has helped extend the earned income tax credit to almost half of all U.S. states because of its work with state governments and local organizations; and the Heritage Foundation played a decisive role in laying the conceptual and organizational bases for the Department of Homeland Security after the 9/11 attacks. Similarly, the Rand Corporation, a venerable think tank that was first established as an outfit within the Air Force and later spun off, conducted the background study that convinced the Department of Defense to abandon its “Don’t Ask, Don’t Tell” policy, and include gays and lesbians as full members of the U.S. armed forces.

And think tanks are probably even more effective in helping frame issues so that policymakers and the public think about them differently–or examine them for the first time. The work of both the Carnegie Endowment and the Kennan Institute on Russia-U.S. relations has been critical to help us better understand the Putin enigma; research on global attitudes at the Pew Center and the Chicago Council on Global Affairs helps us understand what people in the United States and around the world think about one another; the Baker Institute in Houston has produced some of the most insightful work on energy futures.

Some critics have decried the rise of partisan and ideological agendas in think tanks, but the concern seems overwrought. Decision-making in our country is based on a contest of competing interests and opinions in the marketplace of ideas. It is healthy for political parties and interest groups to have their own affiliated research groups that can flesh out proposed policy prescriptions, whatever their political orientation, with more care and consideration than frontline politicians could ever do. The more well thought-out, competing voices in the debates over our nation’s future course, the better. And, as with any marketplace, it is the responsibility of consumers–in this case, journalists and policymakers–to be informed shoppers, to know the leanings of the organizations that they use as sources of information, and to demand transparency regarding their sources of funding and purpose. And think tanks would be wise to err on the side of disclosure to help this marketplace function well.

At the same time, in today’s hyper-partisan environment, Washington is also in need of a set of think tanks not driven by strong partisan or ideological agendas that can convene diverse points of view in a neutral, trusted setting. There has never been a greater need for organizations that can inject a measure of reason and rationality into otherwise polarized debates, bridging and brokering partisan divides, marshaling facts and dispassionate analysis. Indeed, in Washington, as Seinfeld would put it, there has never been a greater need for “a tank … to think in.”