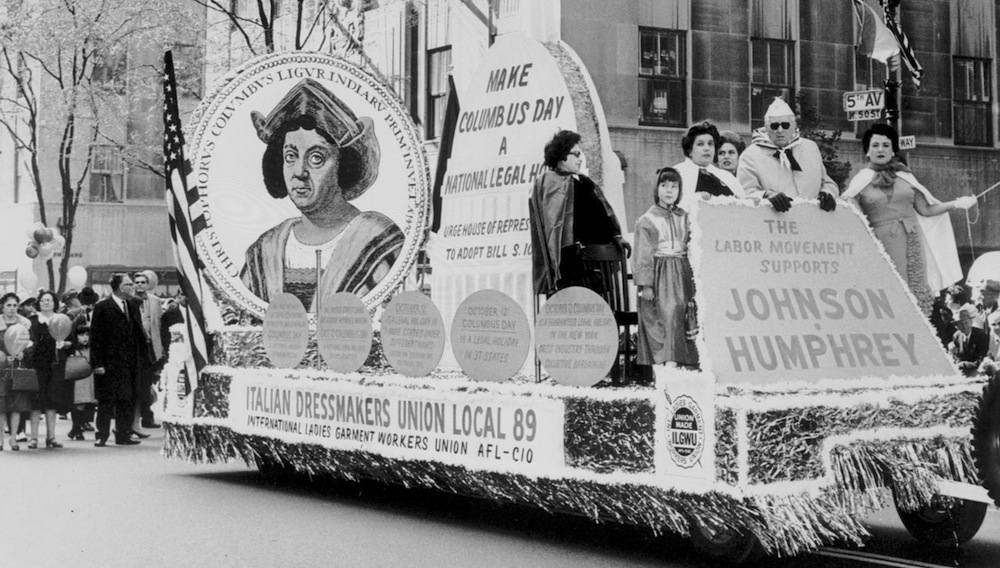 It used to be that Christopher Columbus was the major iconic representative of the Italian-American community in popular culture, but he has since given way to the likes of Tony Soprano and all the Hollywood-inspired gangsters that came before him. This may seem a serious devaluation, but in fact—in one respect at least—the Columbus-to-Soprano relay reflects one auspicious development of the last century: the general acceptance of the very identity of “Italian-American.”

Because, say what you will about Tony Soprano: There was no questioning his quintessential Americanness.

A century ago, when Italians came pouring into the United States in one of the most massive immigration inflows in the country’s history, it was not widely accepted to be an ethnic American, whether this was an Italian- or Polish-American. At a Columbus Day speech at New York’s Carnegie Hall in 1915, the former President Theodore Roosevelt thundered: “There is no such thing as a hyphenated American who is a good American. The only man who is a good American is the man who is an American and nothing else.” To some in those days, hyphenated Americanism even amounted to un-Americanism.

At the time, it was widely believed that the public schools should force “hyphenated Americans” to become “Americans pure and simple” and shed their old customs and cultures. In New York City, schools saw their task as weaning immigrant children away from their ethnic heritage and transforming them into loyal and proper Americans. Writing about the East Harlem school he attended before World War I, the Italian-born educator Leonard Covello noted that there was no mention of Italy or the Italian language or what famous Italians had done, with the possible exception, he noted, of Christopher Columbus: “We were becoming American by learning how to be ashamed of our parents.”

Times have changed. Being ethnic, and holding on to ethnic cultures, is now seen as compatible with being American. More than compatible, even—the possession of a hyphenated identity is an essentially American trait. Italian- or Irish-Americans, and other descendants of long-established immigrant communities, embrace their hybrid identities, just like the children of the millions of Latin American, Asian, and Caribbean immigrants who have arrived in the post-1965 immigration era. Today’s second-generation Americans are less likely to be embarrassed by their parents’ “foreign ways.” Indeed, they are usually proud of their ethnic roots, eager to teach their own children about their parents’ culture and, in many cases, want to help them learn their parents’ language alongside English.

America’s absorption of vast numbers of eastern, central, and southern European immigrants and their children in the mid-20th century was a watershed that helps explain this remarkable transformation. The second generation’s economic and social mobility, increased social interactions with citizens of other backgrounds, and acculturation to mainstream American ways contributed to a greater acceptance of ethnic identities. So did their patriotic embrace of America during World War II; as the children and grandchildren of European immigrants fought together, the image of the multiethnic platoon fighting side by side to preserve American democracy became, in the words of the historian Gary Gerstle, an honored image of the nation.

By the 1940s, the notion that America was a “melting pot” had entered the majority of American textbooks, and over the next two decades Ellis Island identities began to replace Plymouth Rock ones as our origin stories. By the 1960s, according to Frances FitzGerald’s portrait of history textbooks, America Revised, most of them had ceased to talk about “the immigrants” as distinct from “us Americans.” The new orthodoxy was that “we are a nation of immigrants.”

The civil rights movement and legislation of the 1960s, and the minority rights revolution they brought about, were also critical in creating a more inclusive national identity. Efforts to combat discrimination and open up opportunities for African-Americans in schools, workplaces, and the ballot box were extended to other racial minorities and thus to non-European immigrants and their children. Diversity was now celebrated as one of America’s core principles. Ethnic hyphenation became a natural idiom of belonging in what the historian Matthew Frye Jacobson has called our “hyphen nation.” As the history textbooks make clear, the United States, once conceived as male and Anglo Saxon, became filled with blacks, white ethnics, women, Latinos, Native Americans, and Asians.

Of course, the United States has not turned into an ethnic and racial paradise. Far from it. Italians no longer experience the virulent prejudice and discrimination they faced a hundred years ago, but negative stereotypes about them as mobsters and Mafioso have not disappeared, as the portrayal of Tony Soprano makes plain. Even more troubling are the racial barriers that non-white arrivals can confront. Yet one change is undisputedly for the better. The children of today’s immigrants are less pressured to give up their ethnic identities to become American, and can more comfortably merge the old and the new. Today, there is little question: A hyphenated American can be a good American.