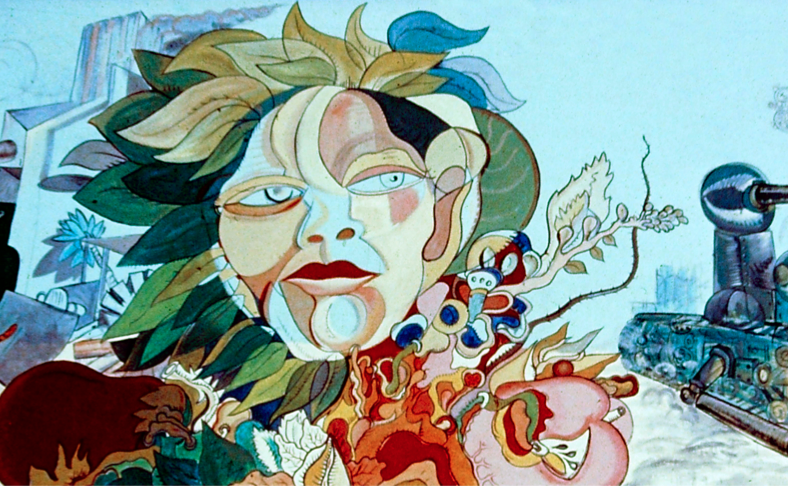 In 1974, artist Roberto Chavez painted a 200-by-30-foot mural called The Path to Knowledge and the False University at East Los Angeles College, where he was a professor of Chicano studies. The mural featured surrealist pyramids, large cubist-inspired faces, military tanks, weapons of war, and even a self-portrait of Chavez painting amidst symbols representing the struggles and choices of college students. The mural spread out like an ancient Mesoamerican codex across the upper wall of the Ingalls Auditorium, now known as the Edison Center for the Arts. It displayed comic book and folk art influences and references to The Teachings of Don Juan: A Yaqui Way of Knowledge by Carlos Castañeda and Gulliver’s Travels by Jonathan Swift, against an evocative Southwestern background.

Chavez often added text to the mural’s surface, encouraging the campus community to boycott lettuce in support of the United Farm Workers, for example, but the mural itself was quite conceptual. He hoped contemplation of the mural would compel students to look critically at the world around them, to avoid a military-industrial complex that sought to entrap them, and ultimately to reach a kind of self-aware enlightenment. Established curricula, teachers, and departments within institutions of higher education, Chavez believed, did not always function in the best interests of their students.

For five years, The Path to Knowledge was a major cultural landmark. It was the largest mural ever painted in the East L.A. area–and could even be seen while driving east from downtown Los Angeles on the 60 Freeway. It placed East L.A. College within a burgeoning public art movement that would make Los Angeles the mural capital of the world. It legitimatized mural painting within the academic environment. And it connected East L.A. to early 20th century Mexico, when large public murals were part of the country’s revolutionary transformation.

I met Chavez in 1979, when he hired me to be the first female full-time staff member in East L.A. College’s Chicano studies department. It felt like ground zero for Chicano and Latino education in California. There was a palpable sense that we could change the world—that “cultura cura,” culture heals. Our department offered classes on Mexican and Chicano literature, visual art and theater, and put on events such as a newly revived el Dia de los Muertos festival. But the street mural was the most visible and visceral embodiment of Chicano culture on L.A.’s Eastside.

In the early 1970s, América Tropical, a controversial mural painted in 1932 by Mexican artist David Siqueiros to protest American imperialism, began to bleed through the wall of the old Italian Hall downtown at the Placita Olvera. A group of Chicano activists and scholars were inspired to call for its restoration–and inspired murals around the Eastside (and I mean East Los Angeles and Boyle Heights, not Silver Lake or East Hollywood!). Larger-than-life images of Joaquin Murieta, Che Guevara, and Cesar Chavez, and slogans such as “Viva La Raza” and “We Are Not a Minority” began to appear on garage doors, cinderblock walls, and storefronts. Then, gaining respectability, the murals moved to parks, libraries, public housing, and a host of official venues, with government funds providing the paint and (very) small artist stipends. Chavez attempted to harness this energy at East L.A. College by bringing to campus mural painting classes, student murals, and most importantly The Path to Knowledge.

I will never forget walking with my colleagues past the auditorium one day early in the fall of 1979 when someone noticed the mural was gone. It had been whitewashed–literally–by the campus administration. Why had an institution that had supported Chavez, this mural, and the Chicano studies program taken away something many of us felt deeply connected to in one fell swoop?

There was some controversy at the time as to who gave the order to whitewash the mural, but it has become clear that the whitewashing was part of a larger agenda by the new college president and the administration to blunt the progressive, political, and ethnic edge that had developed on campus. The college had recently eliminated its African-American studies program and, as it turned out, the mural’s erasure was the beginning of the end to the Chicano studies department’s crusading spirit. The charismatic Chavez left the department in 1980 and, in 1981, resigned from the college. As the department shifted from activism to a less community-focused curriculum, the False University Chavez had warned us about in his mural hit home sharply and suddenly.

By the new millennium, the city of Los Angeles was rapidly removing street murals, labeling them graffiti and gang-related. When I talked about murals in the early 2000s with my students at East L.A. College, many of them the sons and daughters of immigrants from Mexico, El Salvador, and Guatemala, they acknowledged that they and their parents had no connection to the mural renaissance of the 1970s. They told me they saw the murals as more problematic than empowering.

But Chavez has found his way back into the Los Angeles and Chicano art canon. The launching of the Getty initiative, Pacific Standard Time: Art in L.A. 1945-1980, an exhibition showcasing Chicano artists from mid-century Los Angeles. Chavez’s work was eventually featured in The Mexican American Generation exhibition at the Autry National Center in 2012.

The positive reception the exhibition received led me to approach the Vincent Price Art Museum at East L.A. College, the very campus that had erased Chavez’s work, with a proposal to host a retrospective. Enough time had passed that the story no longer carried the energy of the 1979 tragedy. And many artists and a number of community arts organizations had started trying to preserve L.A.’s surviving murals. Karen Rapp, the museum’s director, was curious to hear more about what had happened.

This September, when the exhibition opened, Chavez, 82, got the warm welcome back he deserved. Many former students and community members came to pay homage. As he began his gallery talk, he held up a paintbrush in a raised fist, and said, “I will keep my comments brief as this is my weapon of choice.” This got a big laugh. All of us who had known him were thrilled to see the old Chavez back on campus. But it took his mural and its story becoming history to make an untold narrative worth exploration.

Roberto Chavez and the False University is on display at the Vincent Price Art Museum, East L.A. College, through December 6.