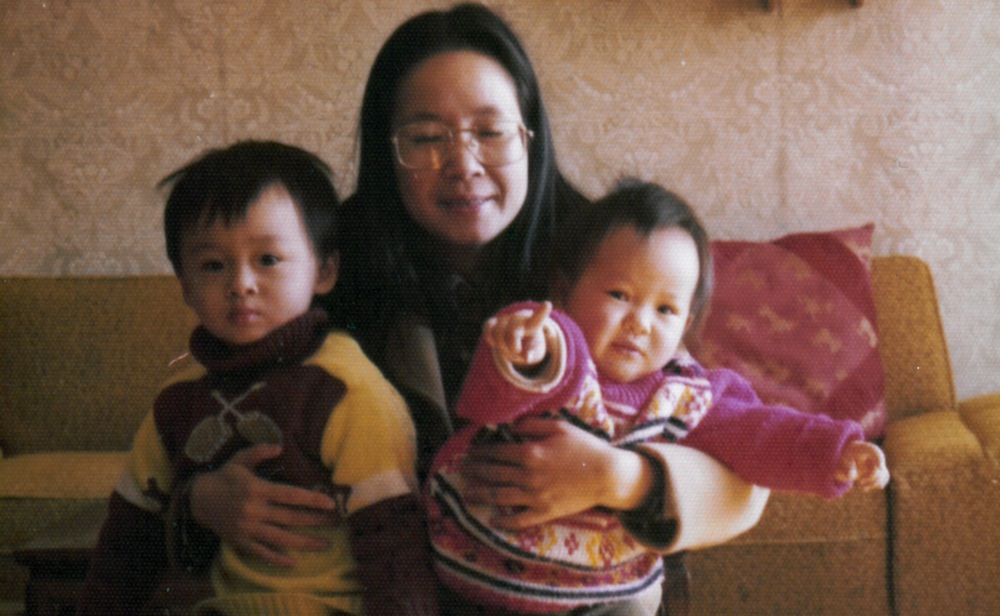 When my great-grandfather made his way from China to the United States in the 1920s, I doubt he ever imagined his grandchildren and great-grandchildren would make their way back. California was a land of opportunity, where he spent the rest of his life.

I am also a Chinese-American immigrant, but I have a much more fluid identity than my great-grandfather. I have a foot in each country, and I have a life where being American and being Chinese are no longer exclusive.

My family’s American journey started when my great-grandpa came to this country by way of Angel Island, the Ellis Island of the West. Emigrants from China before my great-grandpa had named San Francisco “Gold Mountain”—both for the literal gold in its hills and its metaphorical power. But gold wasn’t the only draw. Tens of thousands of men from China had come to work on the railroads since the 1860s. That’s what drew my great-grandpa to California. He came alone, leaving his wife and children back in Guangdong province in southern China.

My grandpa was just 1 at the time. I don’t know if Great-Grandpa had hoped to bring the entire family over, but Great-Grandmother died young, and the railroads were no place for young children. So Grandpa stayed in Jiangmen, where he later married and raised my mother and her four siblings. Mom tells happy stories of a simple childhood, playing with sticks and beads for fun, even though the country was in a state of constant upheaval as a result of the Japanese occupation and then the Chinese Civil War, which resulted in the formation of the People’s Republic of China. In the late 1960s, around the start of the Cultural Revolution—the most intense of the purges by Mao Zedong’s followers of those deemed traditionalists and “capitalist roaders”—Grandpa brought the family to Oakland to join his father, who had become a carpenter. My grandpa’s family was not specifically targeted, but the tension in the air was palpable. The U.S. had loosened its immigration laws by then, allowing families to reunite.

Great-Grandpa, who came to California to work on the railroads

For my grandparents, this was a land of refuge and stability. Grandpa worked as a kitchen helper at Dave’s Coffee Shop, and Grandma worked in a garment factory. I remember she had a stash of designer labels like Jordache, and would sew them into our sweaters, which made the back of our necks itchy. Grandpa and Grandma did not have grand ambitions; they just wanted their children to have food on the table and a roof over their heads. They believed that as long as their family had a peaceful life, they would be content.

Mom was 16 when she arrived and attended Oakland Tech High School, where she worked hard on her English and went on to UC Berkeley, at the height of 1960s counterculture and student activism. Mom lived in a co-op and has hilarious tales of flushing her roommate’s joints down the toilet because she didn’t like the smell of the smoke, as well as theories on the lasting effects of tear gas on the nervous system, having been exposed to it as a matter of course between classes. She met Dad at a Chinese student group on campus in the early 1970s.

My dad was born at the end of World War II in Nanchang, by the Yangtze River in southeast China, but his father moved his family to Hong Kong and set up Hong Kong’s first evening newspaper. Dad came to the U.S. for college, as did most of his siblings. At the time, the children of well-to-do families were often sent to the West for university.

Mom and Dad moved our family between Hong Kong and California a number of times. I was born in Hong Kong, because my parents had moved back to help with the family newspaper when Dad’s father passed suddenly. They returned to the California to set up an import-export business, and had my sister. In the mid-1980s, their business brought our family back to Hong Kong.

Wherever we were, my parents carried with them the American ideal that merit trumped connections. I was raised with the belief that we could make it on our own. As long as we worked hard, harder than everyone else, we would eventually get ours. “The Tortoise and the Hare” was our bedtime story. And my parents’ hope for my sister and me was that we would find stable jobs as engineers or scientists. It was never a directive but was conveyed through tales of humanity majors working the gas pump.

We both studied science in college; I followed in my parents’ footsteps at Berkeley, and my sister attended MIT. I majored in material science and engineering. Even though I had spent a significant amount of time in Oakland as a child, there were still plenty of things I didn’t understand, like how to order a sandwich without grassy weeds in it (alfalfa sprouts). Or when it was appropriate to wear tie-dye. After the O.J. Simpson verdict was read, I found it strange that newscasters would ask people on the street how the trial made them “feel”; it was even stranger that viewers might actually care. The news in Hong Kong at the time would have reported what happened, and left it at that. Going to college at Berkeley changed the course of my life. I threw myself into experiencing what it meant to be a student at UC Berkeley in the early 1990s. From “Naked Guy” nude-ins to student sit-ins over the abolishing of affirmative action, there was plenty of opportunity to witness the digestive and generative power of American culture. It was mind-blowing to see how my peers valued the ability to break down old conventions and create new cultural norms.

I realized that I was willing to move forward without the safety net that was so important to previous generations of my family. For me, America promised personal freedom and mobility. I changed my major from engineering to American studies. Maybe I could become part of this culture in a way my parents and their parents were not able to. My thesis examined high-tech American marketing, a topic that let me combine my understanding of science with my interest in how mass communications shaped societal values.

After graduating in the late 1990s, I went to work at Saatchi & Saatchi, the advertising agency. But when the dot-com bust came with the new millennium, I surveyed my options. I decided to move back to China, which I thought of as home, too. But even though I had been born there, I found myself being treated as an American-born Chinese.

A company I co-founded supplied industrial equipment in Shenzhen. We had a board member who liked to bring me to industry events because of the way I spoke Cantonese, my mother tongue, and Mandarin. My American-accented Chinese was a minor novelty, and lent him a certain kind of prestige at the time for having a Western-educated employee. Even after years of living in Shenzhen, where many different dialects are spoken, my accent revealed my years away from the mother country. It also invited the pejorative moniker juk sing—a Chinese person raised in Western culture, who belonged to neither. But for me, what was important was that I could navigate both cultures, at will.

I returned to San Francisco in 2009 for love, and, as the region’s economy has rebounded, I co-founded Ready State, the advertising agency I run today. Since then, the call of Silicon Valley has brought back many of my peers, who had also moved abroad the decade before. We’re U.S. nationals who now move freely between two countries.

We didn’t stop being immigrants when my great-grandfather came to America, but we members of the later generations can thank him and others for giving us the courage to leap, and the determination to land. I’m part of a generation of Asian immigrants who have a much wider world to live in.