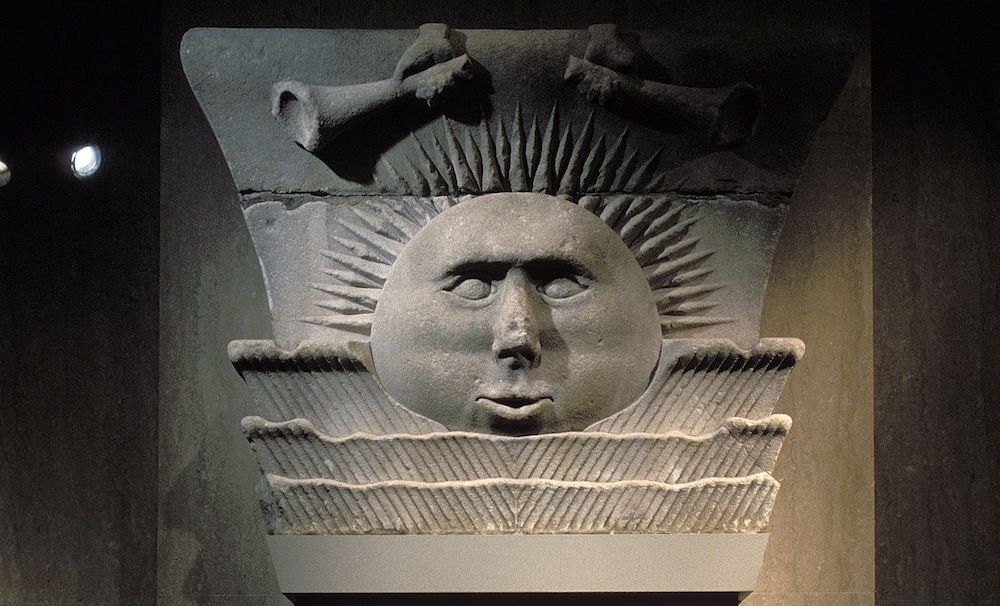 Twelve massive blocks of limestone, each carved with a shining sun and heralding trumpets, once ornamented a temple constructed by the Church of the Latter Day Saints in the town of Nauvoo, Illinois. The temple was built in the early 1840s, after Mormon prophet Joseph Smith and his followers left New York in the 1820s and were forced out of Missouri in the 1830s. The stones’ design expressed the Mormons’ millennial hopes for the second coming of Christ, and the imposing temple itself embodied their hope for a new stability.

But the Mormons’ unorthodox beliefs and practices had met with hostility all during their journey, and they found it in Illinois as well. Anti-Mormon violence culminated in Smith’s murder in 1844. A few years later, a fire destroyed the temple. Brigham Young led thousands of Mormons out of Illinois, leaving the bounds of the United States and settling in the far reaches of the Mexican Republic, in what is Utah today. With the temple in ruins and most Mormons gone from the area of Nauvoo, someone scavenged one of these sunstones and later donated it to a local historical society, which in turn passed it on to the Smithsonian. In light of that history, the sunstone might be seen as representing transience rather than stability, thwarted plans, and a vision unrealized. It is tempting to dismiss the Nauvoo temple for being momentary, unsuccessful, and frankly outside the mainstream of its day.

The sunstone in the Smithsonian collections intrigues me because it offers a powerful counterpoint to one of the most dominant views of America and Americans in the decades before the Civil War. At around the time the Mormons were leaving Missouri for Illinois, the French aristocrat Alexis de Tocqueville made his famous tour of America and remarked upon this country’s rampant materialism: “As one digs deeper into the national character of the Americans, one sees that they have sought the value of everything in this world only in the answer to this single question; how much money will it bring in?”

Many historians second Tocqueville’s diagnosis. Americans were competitive, individualistic, and ambitious in those antebellum decades. The nation was rapidly industrializing, muscling native peoples off the land, and extending the cotton kingdom deep into the South. Love of the dollar was getting things done, and need for the dollar—for security or for respectability—drove many people’s lives.

Given that view, the sunstone reminds us that if a preoccupation with material success was a dominant current of mainstream America at the time, it wasn’t the only one. Indeed, throughout the nation’s history the quest to establish a good or godly community has been a persistent American dream—even informing some of our country’s key origin stories. The 17th-century English pilgrims, who were so unhappy (and so unpopular) in the Old World that they packed their bags and set sail for the New England coast, created a colony as far outside the mainstream as any English man or woman of 1620 might easily imagine.

In the early 19th century, communitarian groups formed over 100 idealistic, utopian communities, Sydney Ahlstrom, a historian of American religion at Yale University, has noted. There were, for example, the Shakers, a communal group united by the belief that their founder, Ann Lee, was the second incarnation of Christ. Commitment to celibacy freed the community from family life and allowed women to serve as economic and religious leaders alongside men. At their height, from roughly 1830 to 1850, the Shakers numbered some 6,000 practitioners living in several communities.

Other religious groups emigrated from Europe to establish utopian settlements here. Bavarian pietists (who formed a movement within Lutheranism) founded Zoar, Ohio, in 1817, and prospered there until the end of the century. Similarly, the Amana Society fled from the German Rhineland to Ebenezer, New York, in the early 1840s, then relocated to Iowa in the decade before the Civil War. Known as “the Community of True Inspiration,” they pooled their wealth and possessions and organized labor around communal, rather than family, lines. By the middle of the century, place names mapped these and similar sects’ ideals onto the landscape: Harmony, Pennsylvania; New Harmony, Indiana; Economy, Ohio.

Then there were the secular socialists and their utopias. Welsh theorist Robert Dale Owen inspired experimental, cooperative communities in Indiana, Pennsylvania, Ohio, New York, and Tennessee. More than 40 short-lived “Fourier” communities replaced the confining family and work relations of early industrial society with more free and fluid “associations” of the likeminded. Still others mixed religion with socialism, as in communities established in Putney, Vermont, and Oneida, New York under the leadership of John Humphrey Noyes. Noyes was known for the controversial innovation of “complex marriage.”

And there were the famous Transcendentalists, whose writings may be part of the American canon today, but who set themselves apart at Brook Farm from mainstream wealth-seeking. They explicitly dedicated themselves to education, intellectual life, and egalitarian relationships. Ralph Waldo Emerson described the fervor around him in 1840: “Not a reading man but has a draft of a new community in his waistcoat pocket.”

We should be careful not to romanticize these radical groups or privilege their various and conflicting points of view. And while the Mormons have flourished—we can hardly consider a religious group whose members include a candidate for U.S. president “outside the mainstream” anymore—most other utopian societies of the early 19th century were ephemeral experiments that only a sliver of antebellum Americans ever joined.

But the extraordinary proliferation of such communities reveals something important about the dominant society that those people left behind. That so many groups instituted changes in relationships between the sexes suggests that mainstream rules for marriage and family left a fair number of people unfulfilled. That so many adopted alternate forms of landholding suggests that the dominant rule of private property did not satisfy every American’s idea of what was fair, productive, and good. As always, the margins of society at a given time illuminate the center, setting in relief the particularity and partiality of what can sometimes seem the only “American way.”