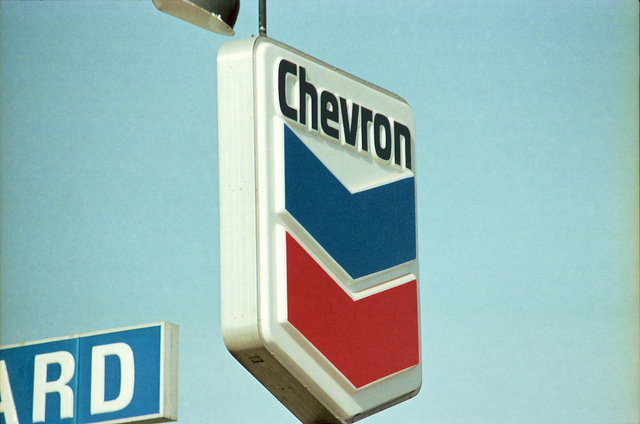 I will not compare thee to a summer’s day. I cannot say you smell like a rose.

But make no mistake: I love you.

You are unaccustomed, I know, to getting letters like this. Love is usually reserved for younger, sexier companies–Google, Apple, or Twitter–across the bay from your San Ramon headquarters. You and other oil companies are villains in today’s California: polluters, price gougers, perpetrators of climate change. In this fall’s gubernatorial debate, Jerry Brown disapprovingly noted your $21 billion in profits last year and blamed you and other oil companies for forest fires and rising sea levels. And I’m not going to get into the ongoing fights over the 2012 explosion at your refinery in Richmond that caused thousands of people to seek medical treatment.

I forgive you none of your sins. Still, I can’t help loving you.

What I love most of all is that you’ve always been what’s most important in any relationship: fully present.

In California, a state of relentless change, companies come and companies go, many of them rudely complaining about the state’s business climate on departure. But not you. You’ve stayed, for 135 years, making you one of our state’s oldest firms. And while you’re aging, you’re still potent. You’re number one among all California companies in revenue. You’re the state’s top oil producer–with the state’s two largest refineries–fueling one of every five cars on California’s roads.

But I’m not just a gold digger. I love how your facilities–including 1,000 miles of pipeline and more than 1,500 service stations–connect the state in a way that few institutions, other than our universities and our prisons, have managed. Your operations bridge north and south, coast and inland, with refineries in the Bay Area (the aforementioned Richmond) and L.A. (El Segundo, a small city named after your second refinery) and oil fields and other facilities in Kern County.

You also connect us to a past too many Californians have forgotten. Your story reminds us of the first quarter of the 20th century, when we were the leading oil-producing state in the country. You were incorporated as the Pacific Coast Oil Company in 1879, became part of the Standard Oil empire in 1900, then struck out again on your own after the 1911 breakup of Standard. In those years, oil attracted millions of people here and kept them employed (including my grandfather, who reported on the wells around Long Beach for a publication called the Munger Oilgram). You can take credit for being early to adopt an eight-hour workday for employees (though you’re no friend of organized labor) and for advancing women in the workplace (in the ’40s, your 56 schools around the state taught women to operate service stations).

Then in the 1980s, you bought Gulf Oil to become the mega-company Chevron. Even as other companies, most recently Occidental Petroleum, departed California, you stayed and served as a stabilizing force in a volatile state. When it seemed no one could get a job in L.A. during the Great Recession, advertisements for your job fairs still played on Southern California radio stations.

Now, despite all these ties, California and Chevron have grown apart. For all your slick publicity about your alternative energy investments, you’re fundamentally a global oil and natural gas company, and California’s political leadership is committed to moving the world away from carbon. I sometimes wonder if you still love us. On a recent trip to Texas, it didn’t escape my notice that you’ve been messing around with Houston, relocating hundreds of jobs there and becoming the title sponsor of the Houston Marathon.

So let me say this now, since I doubt anyone else in California will: Don’t betray my love.

Please don’t go. I know we don’t make it easy on you, but you and California are still better together.

It is precisely because you and California are so different now that we remain useful to each other. And you seem to understand that. Your CEO John S. Watson–while acknowledging “no energy-intensive business would choose to locate” in California today–did tell Forbes: “There are some pluses in being here. It gives you a window on what a non-oil community thinks about our industry. That helps prepare us for what we see around the world.”

And this dynamic cuts both ways. (Although I’ll get killed for saying this,) the armies of lobbyists and consultants you employ in Sacramento and during California elections are a very healthy check on our tendency to adopt restrictions on energy production. You won’t be able to derail our environmental movement and its rush to export carbon-based jobs out of California, but you do slow us down. Your role is essential because California still runs on oil, and will for quite some time.

While our environmentalists will never admit it, your wholesale departure from the state would be bad for the environment. The void you would leave would be filled by smaller companies that aren’t as responsible as you, don’t have the resources you have to mitigate your impacts, and don’t have your history with California.

I do have one request of you, beyond acknowledging my love. (Even for this love letter, none of your current employees would agree to be interviewed.) I wish you would give yourself a human face, preferably of a powerful Chevron executive who is a Californian and can become a constant, recognizable presence in the state’s debates over energy.

Yes, you run ads with California-based employees, but because it’s always somebody different doing something different, it’s hard to get a fix on who and what you are. You’re not unlike California itself in offering so many faces that you’re faceless.

This state needs an oilman with whom we can talk and argue, and who can point out our folly. Sure, activists will continue to protest you, but many Californians would appreciate sharing in your knowledge and perspective.