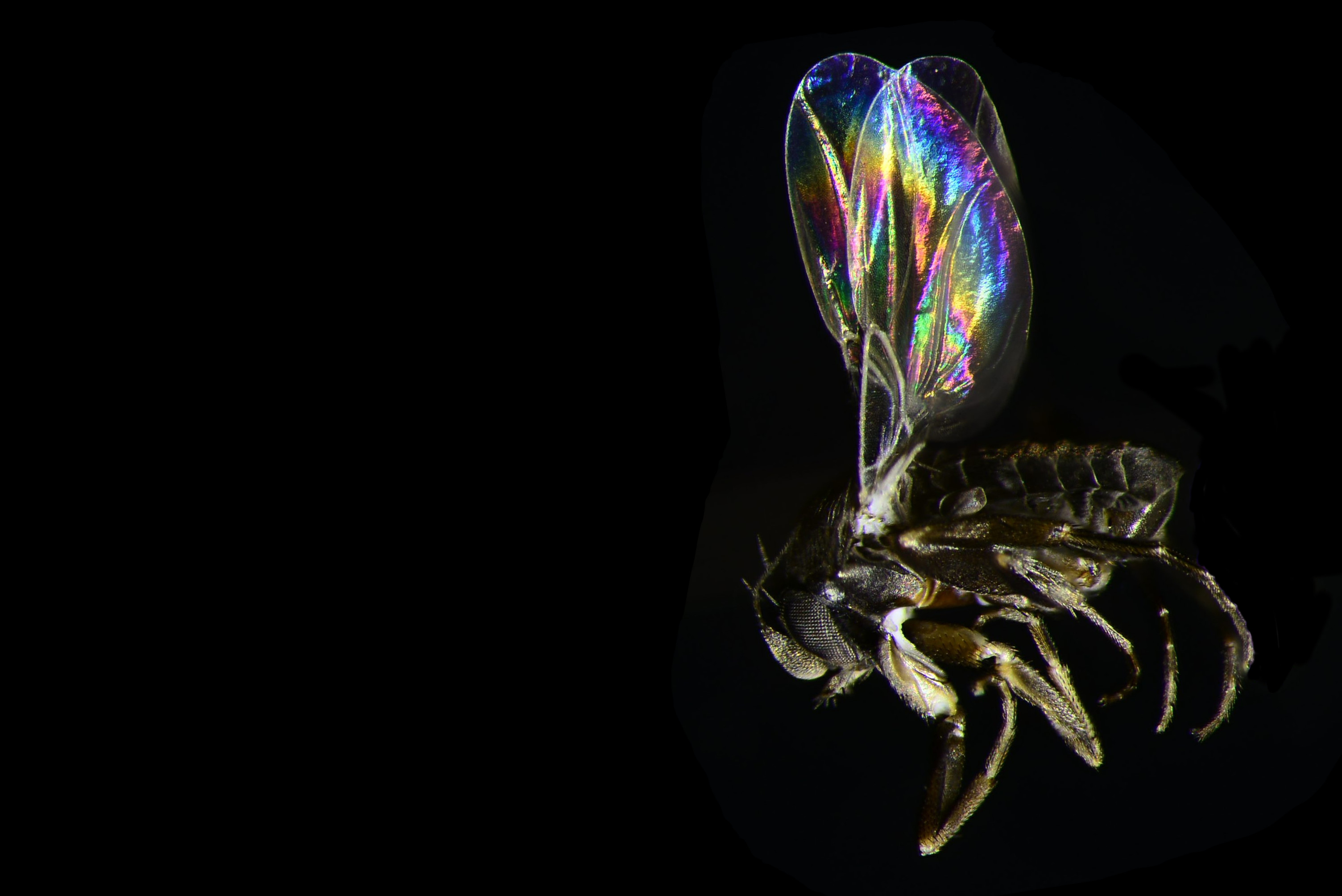 As you get into your car in the parking lot of the Trader Joe’s in Silver Lake, you might just be within arm’s reach of cannibals. Not the human kind–but the insect variety.

Inside a wasp that is buzzing around a nearby bush dwells a bug known as the twisted wing parasite. These tiny insects are genetically close to flies and resemble nothing so much as a small black speck. But placing that speck under a microscope reveals huge, orb-like eyes that, as entomologist Emily Hartop puts it, look like sinister purple boysenberries.

Although the twisted wing parasite’s name comes from the seemingly malformed wings of the male of the species, the female has no wings. In fact, she has no legs, not even functional mouthparts–she is literally just a sac containing eggs and fat cells.

When she is ready to mate, she partially burrows out of her wasp host’s rear end, exposing her head and shoulders. She sends out an alluring chemical scent, a pheromone, to attract her mate, who flies in from afar and expertly inseminates her behind the head. She waits patiently for her eggs to develop and hatch. Then, she becomes a host of sorts: Her larvae slowly devour her as they thrive. When they are ready to search for their own wasp hosts, they wriggle out from behind her head, leaving her shell-like exoskeleton behind. Each female twisted wing parasite can bear 2,590 offspring this way. (The wasp survives the entire ordeal relatively unscathed; its only scar is that it is now sterile.)

This is one of the true tales of L.A. noir unfolding around you–down in the depths of the soil, around the corners of buildings, and under the bushes of Southern California’s dark underbelly. I know about these monsters because I study insects at the Natural History Museum, where I work alongside the entomologists and volunteers (we call them “citizen scientists”) who trap and find them. I can tell you that L.A. is no City of Angels so far as insects are concerned. 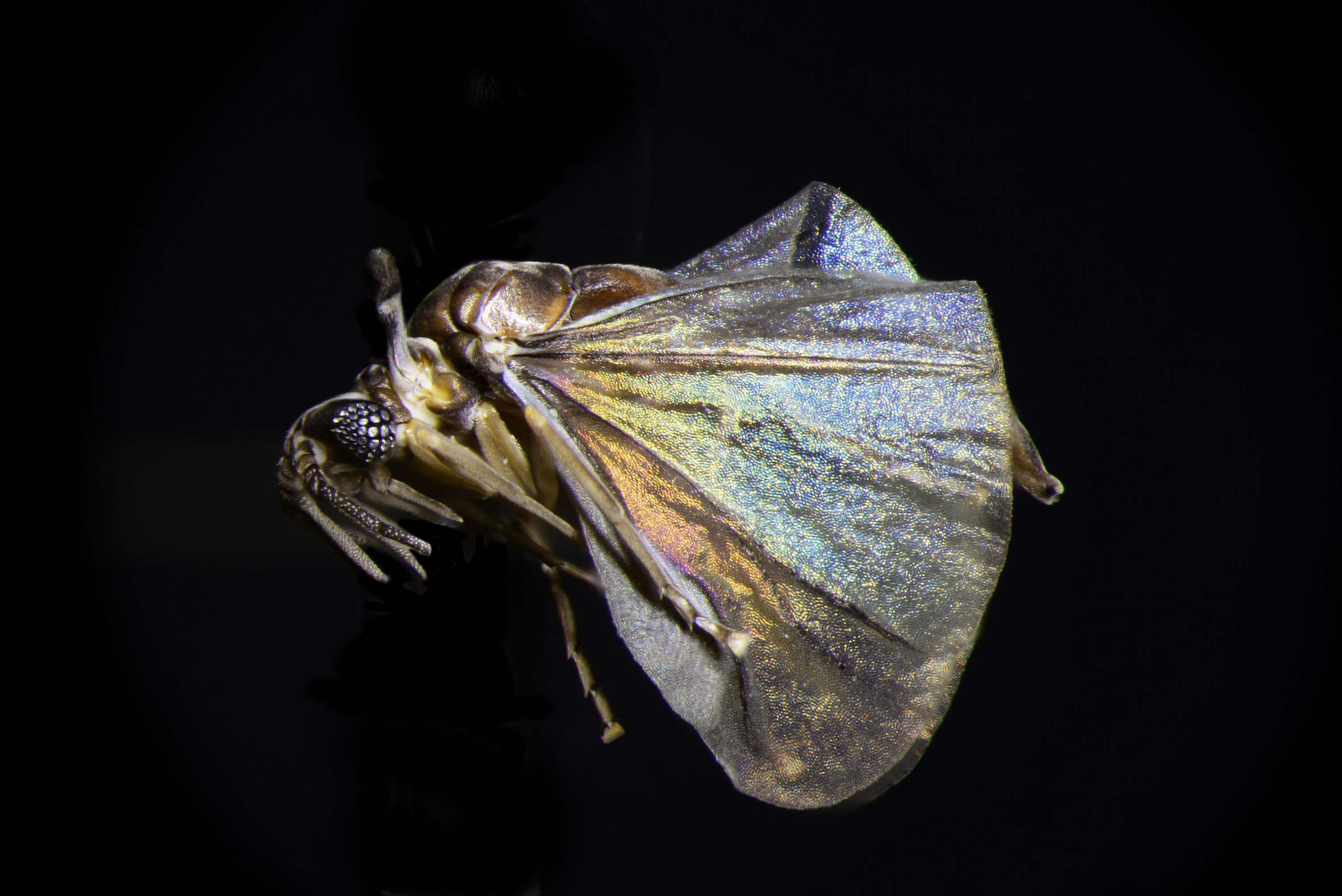 Some of my favorite bugs congregate around dead bodies. One place you might find them is the Hollywood Forever Cemetery, possibly circling around the head of the Johnny Ramone statue. To the untrained eye, they might look like any old gnat. But each of these bugs has a pair of huge eyes that look like they’re covered in mesh, long slender legs, and transparent wings. Couples like to meet in the air and fall to the ground in a moment of insect ardor. They are Conicera tibialis, more famously known as coffin flies.

Some of my favorite bugs congregate around dead bodies. One place you might find them is the Hollywood Forever Cemetery, possibly circling around the head of the Johnny Ramone statue.

After the mating pair has parted, the female fly locates dead or decaying tissue (by smell, scientists presume) so she can lay her eggs. She can burrow almost seven feet underground, which is good because, if she’s looking for human tissue, it is often, as the adage says, about six feet under.

She lays her eggs in the nooks and crannies around the coffin, and lets her maggots do the stealthy work of sneaking into the actual casket. If all this seems like a lot of work, it is. Oftentimes these flies eschew the dead humans and instead go for easy pickings such as the pet dog you buried in the backyard last week.

Murder in the L.A. River

As the runners, bikers, and strollers make their way along the path next to the L.A. River in Frogtown, the water gurgles by and the bushes gently rustle in the wind. But this idyllic scene masks murders happening just beneath the water’s surface.

Baby dragonflies, otherwise known as nymphs, are voracious predators. Measuring from the size of a peppercorn up to an inch and half, these muted brown bugs blend in nicely with the muddy bottom at this part of the L.A. River. When prey swims by–it could be a fish, a tadpole, or a dragonfly sibling–the nymph unleashes its hidden jaws-of-death. Within a microsecond, the jaws snap onto the stunned victim and pull it in to be eaten alive. Nymphs can consume multiple meals a day in the watery depths—they are true cold-blooded serial killers.

Off With Their Heads

Another of my favorite ghoulish insects was discovered last November in Glendale in the big yards of the big houses sitting snugly up against the Verdugo Mountains. There, a large ant serves as the mansion of tiny Pseudacteon californiensis, or the ant-decapitating fly. These ants, known as velvety tree ants, make for nice homes because they are larger than the usual black ants you find invading your cat’s food bowl or committing suicide in your freezer during a heat wave. And they also have curb appeal: a velvety black abdomen and reddish-orange thorax. Perhaps that’s why P. californiensis has evolved to infect this ant and no other. 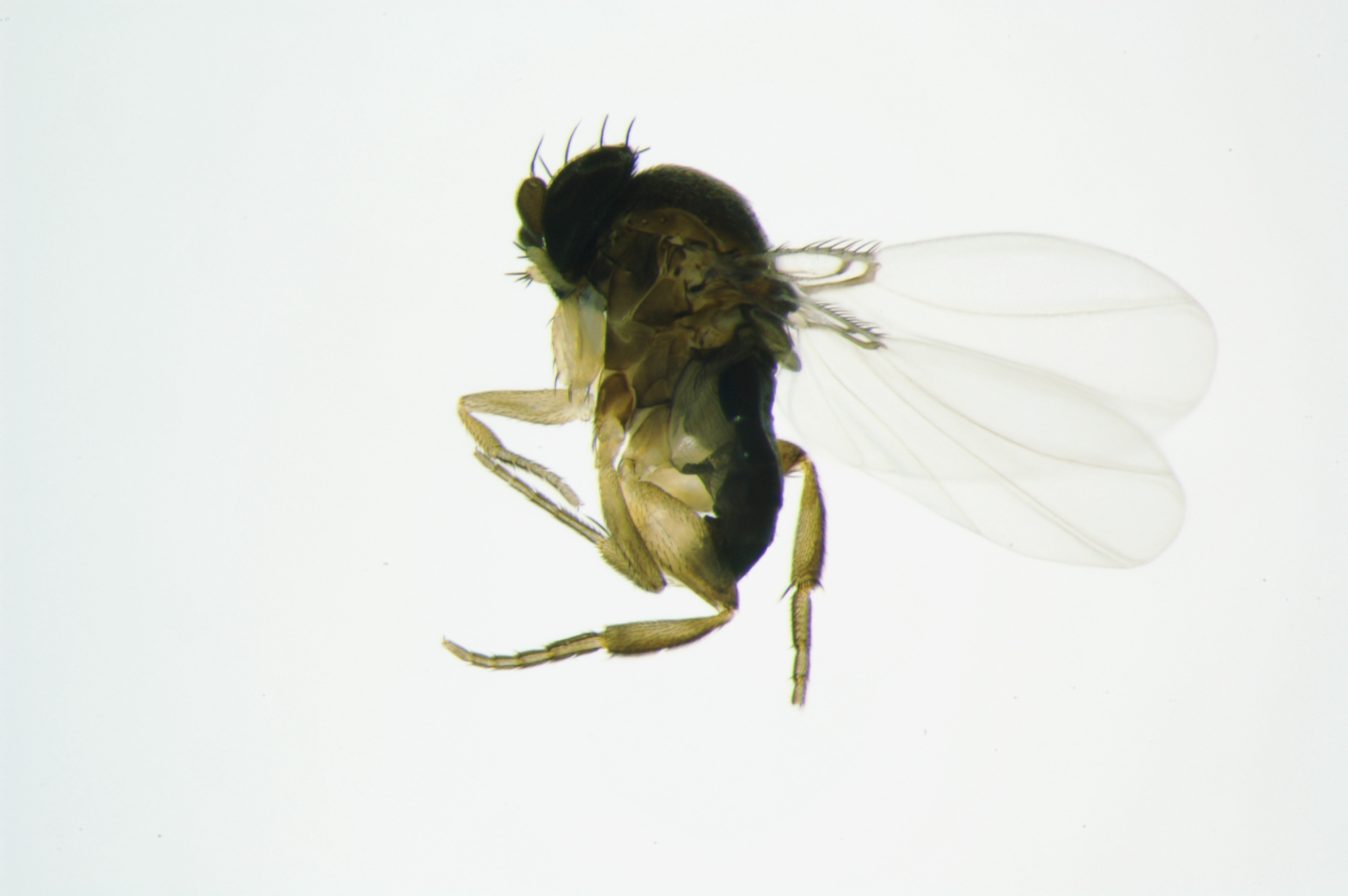 Instead of a U-Haul, the female P. californiensis moves into her host by inserting her needle-like egg-laying device (ovipositor) into a weak point between two of the ant’s abdominal plates. She lays one solitary egg and flies away.

Inside the ant, the egg hatches, and the maggot journeys to the ant’s head, where it chews its way through various tissues. Eventually, the ant is decapitated and dies–and the adult fly emerges through the oral cavity in a scene reminiscent of a horror film.

Zombies are all the rage in Hollywood–but real zombified bees might actually be invading Los Angeles any day now. Since 2011, infected bees have been spotted from Seattle to Santa Barbara. We’re not sure if they’ve arrived here already, but we recently set out traps in the Natural History Museum’s Nature Gardens to find out.
“Zombees” begin their lives as normal honey bees, Apis mellifera. But when they meet a tiny honey-colored fly with dark eyes known as the zombie fly, Apocephalus borealis, these bees begin living a nightmare.

The tiny female zombie flies insert their needle-like ovipositor into the abdomens of their bee hosts. They typically deposit a number of eggs, which hatch into maggots after a few days. Up to 15 maggots can survive inside of one honeybee, eating the bee’s insides. Right before the maggots are ready to turn into pupae, the next stage of their development, the zombee is somehow inspired to leave its hive at night–for what some call a flight of the living dead.

These zombified bees are attracted to light, circling porch lights or writhing under lit windows in the early hours of the morning. About seven days later, the maggots erupt en masse from the neck region of the bee. They then crawl a short distance away, pupate, and emerge as adult flies nine days later, ready to find their next victim.

When I pull dragonfly nymphs out of the L.A. River, or when I look at a zombie fly under a microscope, I revel in the fact that I’m privy to a tiny world that often goes unnoticed. Some people are afraid of bugs–and if you know what they’re doing to each other, it’s not hard to understand why. But bugs define our city as much as people do. If we don’t understand their lives and worry about their future, we’re not planning for our own future, either. And in a town that’s full of sequels and remakes and adaptations, the true stories of their lives are much stranger than our Hollywood fiction.