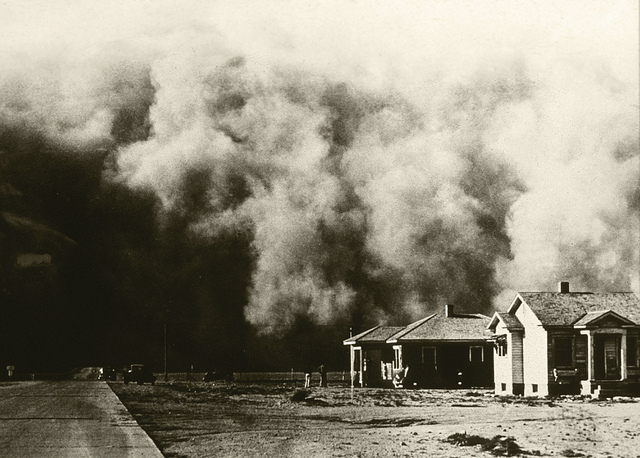 On April 15, 1935, one of the largest dust storms in U.S. history smothered Oklahoma and the Texas panhandle in a cloud thick enough to nearly blot out the noonday sun. It was this day, which would become known as “Black Sunday”, that produced the Associated Press article that coined the term “Dust Bowl.”

Newspaper articles, novels like The Grapes of Wrath, and photographs like Dorothea Lange’s “Migrant Mother” have told us stories about the human hardship of that nearly decade-long drought. And now a new analysis I worked on reveals how bad the Dust Bowl really was—and provides a baseline to judge the dry times we face today.

By studying tree rings across the West from the last 1,000 years, a group of us at NASA and Columbia University found that 1934 was likely the worst drought of the last millennium in North America. And not only was it the worst drought, but it was the most severe and widespread by a substantial margin.

We could distinguish the relative wetness or dryness of the years by looking at the spaces between tree rings. In western North America, trees grew well and had wide rings when it was wet. When it was dry, the tree rings were practically on top of each other.

Why was the 1934 drought so bad? How was it able to spread across the many different climates of the West?

The drought that led to the Dust Bowl started off in a fashion similar to the conditions that have led up to the current drought in California.

By cross-checking our tree-ring data with a data on atmospheric circulation in the 20th century, we saw the drought that led to the Dust Bowl started off in a fashion similar to the conditions that have led up to the current drought in California.

During the winter of 1933 to 1934, a pattern of high pressure in the atmosphere emerged along the West Coast. High-pressure areas in the northern hemisphere are associated with clockwise circulation of air around their center, and this acted to deflect the usual winter storms away from the West Coast and Southwest. This same circulation pattern, a part of the normal variability in the atmosphere, also helped cause the 1976 to 1977 drought in California and held court over California this past winter, before dissipating in the spring.

By the spring of 1934, too, the high pressure had disappeared. So high pressure alone didn’t explain why that drought was able to spread and intensify in the spring and summer. There was a second critical ingredient: the way humans had conducted agriculture in the Central Plains and Midwest. Farmers replaced the native, less thirsty grasses with crops that fared poorly during the drought, exposing large areas of bare soil. The landscape was especially susceptible to wind erosion, but farmers took few measures to protect their land from wind, resulting in dust storms that were historically unprecedented.

And once that dust is in the air, it became an active player in changing the climate. Dust in the atmosphere blocked energy from the sun from reaching the surface, energy necessary for invigorating the water cycle. In areas where these dust storms were prevalent, especially downwind from where they originated, the dust in the atmosphere helped suppress the rainfall, further drying out the soils and allowing the drought to spread.

In April and May of 1934, four major dust storms billowed forth from the Central Plains, scattering dust across the eastern United States as far as New England and Florida. Pilots flying over North Dakota during one such storm observed dust in the atmosphere at elevations up to 14,000 feet. Dust storms in South Dakota caused over 200 million dollars worth of economic and agricultural losses. In Nebraska, the wind erosion was so relentless that dust hung in the air for 21 days out of 30 in April.

By the summer of 1934, extreme drought conditions covered nearly three quarters of Western North America. By the end of the summer, reservoir levels were as low as 13 percent of capacity in Colorado and Wyoming. Fields from Texas to North Dakota were in no condition for planting, and over 1,100 counties declared drought emergencies.

Could a drought like 1934 occur again in the future? Certainly the fact it occurred in the past means that the climate system has the capability of doing it again. The high- pressure pattern that started that drought, and our current one, is simply a part of the normal variability in the atmosphere.

California can breathe a sigh of relief, however, because we’re unlikely to see a return of the dust storms that so dominated the landscape during the 1930s. The Soil Conservation Service (now the Natural Resources Conservation Service) was founded in response to dust storm activity during the Dust Bowl, with the mission to dampen the impacts of drought and wind erosion. Their efforts have been remarkably successful at preventing 1930s-level land degradation from occurring again, even in the face of later severe droughts such as the ones that occurred in the national drought of the 1950s that hit the southern half of the U.S. hard, and the 2012 drought that crippled the Central Plains.

Still, that doesn’t mean that we don’t have to figure out ways to deal with serious, prolonged droughts. Climate change is coming and scientists expect it will reduce the amount of rain that falls across the Southwest and Mexico in the next decades. In other areas, warming in the winter will favor rain over snow, making it harder to capture all that precipitation in our reservoirs. Warmer overall temperatures during the spring and summer will likely exacerbate droughts when they do occur by increasing evaporation and drying out the soils further.

Will any of these droughts come to match the exceptional summer of 1934? Only time—and tree rings—will tell.