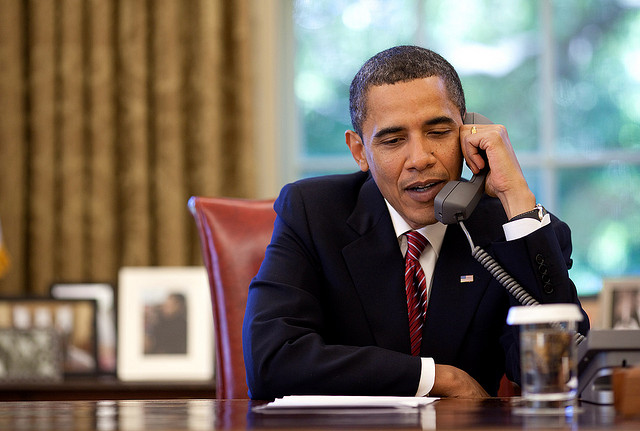 Does America need more than one president?

The question comes to mind as we watch Barack Obama abandon cooperation in favor of strategies that bypass Republican obstruction on Capitol Hill. Obama’s approach is understandable, but turning to executive orders and other paths to one-party action will only aggravate the problem of political dysfunction. In the short run, Obama may be able to ram his preferences through, but he invites similar action by future Republican presidents. Instead of defusing partisan conflict, Obama will fuel its expansion.

For a solution to our high levels of partisan conflict, we would do well to learn from the legacy of Nelson Mandela. The late South African president understood a key principle for effective governance—if you want everyone to work together on behalf of the common good, you have to give everyone a meaningful voice in government. Mandela rejected one-party control and instead chose a politics of inclusion. As former President Bill Clinton observed about Mandela, that’s the only politics “that works.” Indeed, said Clinton, “it’s the only thing that’s working in American communities today.”

The United States would do well to replace its one-person, one-party imperial presidency with a two-person, two-party presidency.

But we currently have a politics of exclusion in Washington, and that explains much of the dysfunction that prevents Congress and the president from solving the country’s pressing problems. Democrats and Republicans both are well represented on Capitol Hill, but only one party is represented in the White House.

It was not always a problem to have a one-party presidency, but over the past 75 years, the Oval Office has amassed an exceptional amount of power. Presidents control policy for air quality, energy exploration, education, healthcare, consumer protection, and many other matters through agency regulations, executive orders, and other unilateral actions. Presidents dominate foreign policy even more. They decide when we go to war, which foreign governments we recognize, and which undocumented immigrants we deport. As Arthur Schlesinger, Jr., wrote, we now have an imperial presidency.

When a single person exercises the immense power of the modern presidency, people fight tooth and nail to secure that power. They spend billions to win the election, and they spend the ensuing four years positioning their party for the next election. One side of the aisle in Congress backs the president; the other side devotes itself to obstruction. Instead of responsible governance, we get the permanent campaign. It is no surprise that the sharp increase in partisan conflict has paralleled the huge expansion of presidential power.

The United States would do well to replace its one-person, one-party imperial presidency with a two-person, two-party presidency. Instead of electing the candidate with the most votes, we would send the top two finishers to the Oval Office. Presidential partners usually would come from the Democratic and Republican Parties, but they also could emerge from third parties.

By giving both sides of the political spectrum a voice in the executive branch, we would temper partisan conflict. Currently, half the public is shut out of the White House and turns readily to partisan opposition. A coalition presidency would represent the views of nearly all Americans. Hence, a much higher percentage of the public would be comfortable with executive branch initiatives. Even if legislators wanted to play partisan ball, they would not find a receptive electorate. There no longer would be a mass of disaffected voters to mobilize against the Oval Office.

Members of Congress from both sides of the aisle would have other reasons to cooperate with a bipartisan White House. For example, they could share in the credit for presidential achievements. During President Obama’s first term, Republicans recognized that even if they voted for the economic stimulus or healthcare reform, Democrats would receive all of the credit for the programs. GOP members of Congress could benefit politically only by opposing legislative initiatives from the White House and hoping the initiatives would be defeated or would fail after enactment. With bipartisan presidential proposals, both parties could share in the credit for success.

All members of Congress also would be in a better position to get help from the executive branch for their constituents. As I found during my service in the Indiana House of Representatives, legislators often do more for their districts by cutting through governmental red tape than by passing bills. But I also found that I could help my constituents with the executive branch only when it was headed by a governor of my own party. With a two-party executive, every member of Congress could find a receptive ear in the White House

Shared power would promote better presidential decision-making. The Constitution envisions an executive who primarily implements policy decisions made by Congress. But the modern president has assumed much of the legislative branch’s policymaking authority. While it makes sense to have a single person who can act decisively and with dispatch when the person is an executor of policy made by others, the founding fathers correctly reserved policy making for multiple-person bodies. As Woodrow Wilson observed, “the whole purpose of democracy is that we may hold counsel with one another, so as not to depend upon the understanding of one man.”

The key question is not whether to have shared governance but how the sharing should be structured. Game theory supplies a sound answer. If we gave two presidents equal power, we would give them the right incentives to cooperate. Elected officials may be highly partisan, but they are partisan for a purpose. In typical power-sharing settings, one person can hope to establish a dominant position by outmaneuvering the other person. In a properly designed coalition presidency, neither president could hope to prevail over the other president. During their terms, they would share power equally, and reelection also would come with half of the executive power.

Two presidents would have a potent incentive to cooperate. If they spent their terms locking horns, they would not be able to implement key policy goals. And having reached the pinnacle of political life, presidents care most about their legacies of achievement. Accordingly, they likely would come to accommodations that would allow them to implement meaningful policy changes. Presidential self-interest would prevent stalemate.

While the founding fathers preferred a single executive in 1787, they likely would approve of a bipartisan executive today. They wanted the presidency to speak for everyone, not just residents of a particular interest group or political party. The founding fathers also believed in radical reform. When their political system failed, they understood the need for major structural change. To restore the Constitution’s vision of a truly representative government, two presidents really would be better than one.