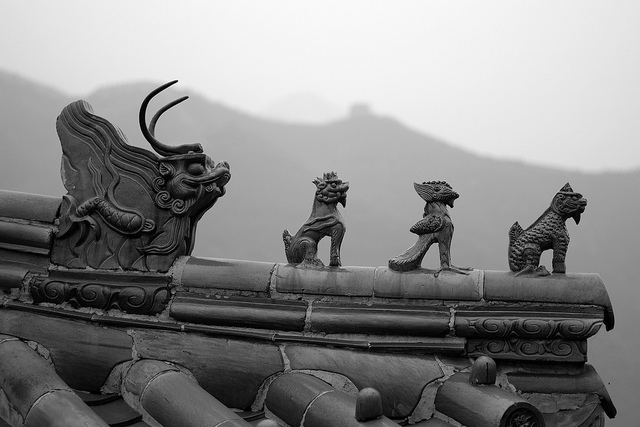 “In his condition, you’ll have to take him home business class,” the doctor in Beijing had said. “Bring sleeping pills.”

As we boarded our flight back home to Washington, D.C., I steered my dad toward business class, while my husband continued with my mother and two young daughters toward coach.

Dad started to follow them. I pulled him toward our premium seats, “We’re sitting here.”

Puzzled, he looked toward our family walking away.

“Huei-Chen!” he called to my mother.

He didn’t understand. Why in the world would we be separated from the others? In his 85 years, he had only ever flown in the back half of the plane. It was unthinkable to fly anything else.

As the plane took off, Dad stood up, and again started shouting and heading to coach. I cut him off in the aisle and bodily steered him back into his seat.

I glanced at the video screen in front of us. Our trip route was outlined on the map–a long dotted line across a very wide blue Pacific Ocean. Time to destination: 12 hours, 15 minutes.

This was our third trip to China in as many years. At his request, my husband and I had taken him on his “last trip back to China,” after he had survived a major stroke in 2009, and, then again, after he recovered from pancreatic cancer surgery in 2011.

More and more words had retreated beyond his grasp. But seeing his mother’s grave one more time was the one desire he was still able to express repeatedly and clearly to me.

It was clear that these brushes with mortality had made him feel the call of his birth country more intensely than ever. Born in Quanzhou, a southeastern port city, my father came of age during the chaotic years before and during World War II. His father, like generations of southern Chinese men before him, left to work as a merchant in Vietnam, so my Dad and his two brothers were raised single-handedly by their mother. Just young enough to avoid being conscripted by both the Kuomintang and the Communists, my Dad left Quanzhou in 1947 for medical school in Taiwan. Two years later, the Communists would close off China from the rest of the world. My father, who later immigrated from Taiwan to the United States, would not see his parents, his two brothers, and the two younger sisters born after his departure, for 32 years.

By the time the U.S. and China normalized relations in 1979, my father was in his 50s and practicing medicine at a small hospital in the D.C. suburbs. That summer, he made his first trip back to the country he left as a teenager. He would travel back home every few years, bringing jade trinkets for my sister and me, and occasionally smuggling cuttings from his mother’s plants in his underwear. Until he became too infirm to travel alone, he never invited my mother, sister, or me to go with him.

In 2012, as China’s traditional Tomb Sweeping Day approached, my father, again, asked to go home “one last time.” His health and cognition were declining rapidly. Every step he took had become a struggle. More and more words had retreated beyond his grasp. But seeing his mother’s grave one more time was the one desire he was still able to express repeatedly and clearly to me. We knew we were tempting fate. We agreed to take him.

We traveled as an unruly party of six, with strollers, car seats, and a wheelchair. Jet lag got us all up very early on our first morning in China. Dad looked very tired. It was clear that he had slept little. We debated whether to follow through on our plan to get a photo of our two daughters with their grandparents at the Great Wall. It would likely be our only chance to create the memory.

We tried to make the journey as low impact as possible. We hired a van to drive us all the way to the entrance so that we could wheel him straight to the photo op.

Dad was in a great mood on the drive up. He sat in the front seat, and chatted with the driver. He recited Chinese poetry about the Great Wall. We felt as if we might pull it off.

We thought Dad had fallen asleep as my husband wheeled him up the wide stone path to the entrance. So we decided to eat lunch and wait for him to wake. Then, he started listing to one side of his chair, squirming, moaning, and speaking gibberish. For a few moments, we sat paralyzed, staring at my father.

My husband started running my father and his chair back to the parking lot. I started dialing the driver’s number, and rushed the children and my mother out the door, four Styrofoam boxes of soggy noodles hanging from my wrist. Luckily the driver had not wandered far. The girls, aware that a terrible crisis was underway, sat quietly in the van’s backseat, and stared, wide-eyed, at their rocking, groaning grandfather. During the hour-long drive back to Beijing, our 3-year old fell asleep holding her ears.

In the hospital, my father regained his ability to move and walk, but my heart sank when I realized that his weak cognition had been compromised even further. He could form few recognizable sentences or phrases. He pulled out his IVs. “I am a doctor!” he said. He struggled with the nurses. They bound his wrists to the bed. His arms became red and chafed from his struggles with the bindings. He refused to eat or drink. Like a baby, he would only sleep when helped to a wheelchair and wheeled out to what he thought was an imminent discharge. “Let’s go home,” he kept saying. “Let’s go home.”

The staff requested that I sleep in the room to help manage him. A security guard kept me company. I was exhausted, and embarrassed that we had brought a man with my father’s medical history to China in the first place. The physician who treated him in Beijing didn’t hold back his thoughts. “He’s had a long, high-functioning, high-achieving life,” the doctor said. “I don’t think he would want to live like this. It may be time to let him go.”

Continuing with the trip was out of the question. My father barely knew where he was. So, 10 days after arriving in Beijing, we took him home.

I could not persuade my Dad to stay in his seat. He waved away the mimosas and warmed nuts. Instead, he kept standing, and yelling, “Huei Chen! Abby! Let’s go!” He refused to take more than a tiny sip of the Coke I had secretly laced with crushed sedatives.

Nearby passengers had started to stare. Worried that we would all get forced off the flight and abandoned on some Pacific island, I raced back to get help from my husband. He was dealing with his own crisis–our daughter had thrown up in her seat.

A flight attendant – a wide woman nearing retirement age, approached my husband as he crouched at my Dad’s feet, trying to keep him seated. “Sir, you cannot come to the business class cabin.” My husband fumed. “Do you really want to force the pilot to put down this aircraft? I am trying to calm him.”

My Dad got up again. I decided not to struggle. I led him back to the kids. He smiled when he saw them. “Abby!” He gestured at the front of the plane. “Let’s go. Let’s go get some dinner.” Abby was happily watching the Nickelodeon channel in her seat. He leaned against a passenger seat and waited. “Let’s go! Let’s go!”

After a few minutes, I started to nudge him back to our seats. He started walking, saw the bathroom door, and went in. He was wearing a diaper that needed changing. I braced myself.

I steered him back to our seats. But he refused to sit. He stood in the business class galley, right across from the door. “Let’s go!” he said, pointing to the door. Three flight attendants approached me. I had to get him to sit, they said. I told them I had sleeping pills. Could they help me? A call went over the loudspeaker for a doctor. A plastic surgeon from Chile stood up. “Does he have a favorite food?”

We crushed a pill and packed it into a small piece of red bean cake. He refused the cake. I took the piece, waited until he started speaking, and slipped it into his open mouth. He started to spit it out, but then, liking the taste, swallowed it.

A flight attendant helped walk him back to his seat. She knelt at his feet and patiently patted his arm for close to an hour. He drifted to sleep. “My mother has Alzheimer’s,” she said.

The purser, the one who had yelled at us at the beginning of the flight, came up to me: “I went through this last year, too.” A third flight attendant approached to tell me about her own mother.

At Dulles Airport, we waited for the rest of the passengers to deplane before we attempted to move my father, who, just like our toddler, had finally fallen into a sound sleep during the plane’s final turns on landing. We gathered our family together and gently nudged Dad. “Let’s go home.”

My father died in his house of another stroke a few months after we returned from the trip. I received the phone call around dawn. His caregiver said my father had been pacing around the family room and then sat down suddenly, bracing himself against the coffee table, as if he knew something was about to happen. I hope that in those final moments, he saw his mother, and heard her calling him home.