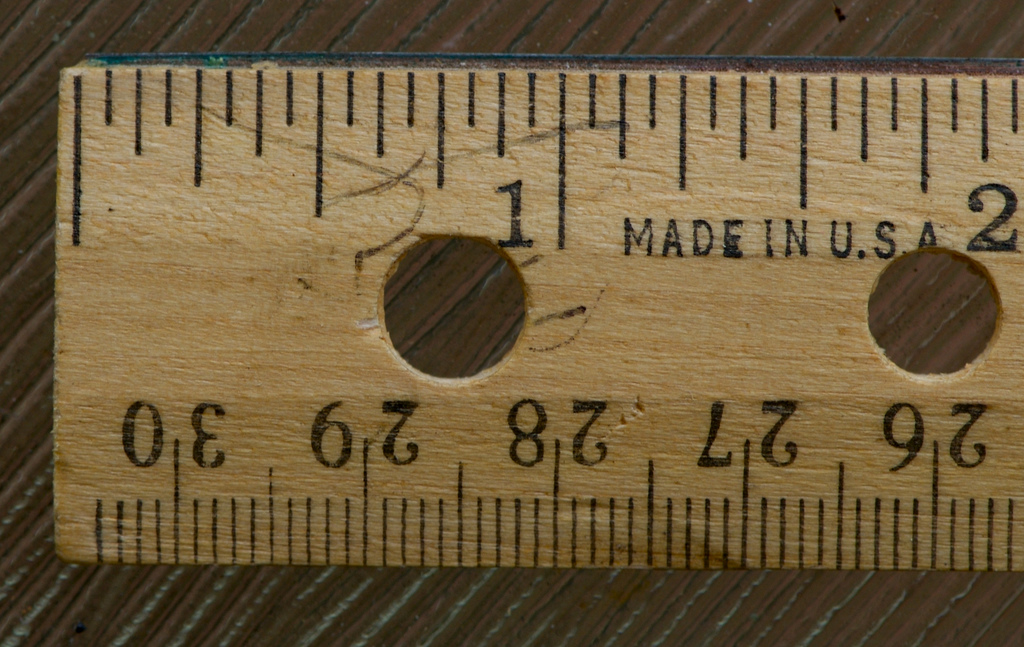 We Americans measure things our own way. Our yardsticks are marked in feet and inches (and eighths of inches), measures that are unfathomable to foreigners, nearly all of whom have been brought up in a decimals-only environment. They tend to see our traditional weights and measures as the very embodiment of wrong-headed American exceptionalism. Why else would we stick to these cultural relics in an ever-shrinking world?

I remember that it was supposed to have been different. My generation of schoolkids was told that we didn’t need to bother learning the number of inches in a foot or the number of ounces in a pound, as a switch to the metric system was imminent. The popular narrative holds that this 1970s conversion movement failed, and that Americans have never gone metric because we are too obstinate or patriotic or just plain stupid to do so. This tale is wrong, or at least wrongheaded. It is also faulty in its basic assumption.

News flash: The United States is metric, or at least more metric than most of us realize. In many areas, the 1970s effort to fall in line with the rest of the world did succeed. American manufacturers began putting out all-metric cars, and the wine and spirits industry abandoned fifths for 750-milliliter bottles. The metric system is, quietly and behind the scenes, now the standard in most industries, with a few notable exceptions like construction. Its use in public life is also on the uptick, as anyone who has run a “5K” can tell you.

Our hybrid system of measurement can surely be confusing, so why is it that America hasn’t gone full-on metric? The simple answer is that the overwhelming majority of Americans have never wanted to. Ditching all of our old measures is an extreme act that would require forcing citizens to change their daily habits and culture. The gains have always seemed too little, and the goal too purist.

Jefferson rejected the metric system, however, because in origin he found it to be too French, which was saying something coming from the nation’s foremost Francophile.

The measurement debate actually goes back to our nation’s very beginning. The original metric system was developed in France during its revolution, and was so radically decimal that it divided the day into 10 hours. As our first secretary of state, Thomas Jefferson was charged with deciding which set of measures would be best for the country to use. He had been instrumental in creating the dollar—the first fully decimal measure any nation ever used—and was in favor of a universal system of decimal measurement. Jefferson rejected the metric system, however, because in origin he found it to be too French—which was saying something coming from the nation’s foremost Francophile. His beef was that the meter was conceived as a portion of a survey of France, which could only be measured in French territory. How universal in spirit was that?

Other Americans didn’t share Jefferson’s concerns. President George Washington repeatedly asked legislators to look at adopting the metric system, while John Quincy Adams considered it the greatest invention since the printing press. Adams couldn’t, however, recommend that the United States adopt a measurement system that nearly vanished after the demise of the French Empire, with which it had first spread.

The meter’s fortunes would soon rebound, however. A new wave of revolutions in the 1830s would see France and Belgium re-adopt the system, while the second half of the 19th century would see it become a truly international system. The reasons for its adoption were various. Italy and Germany were unified out of dozens of statelets, duchies, and principalities, and a neutral system of measurement helped soothe parochial jealousies. Decolonization in Eastern Europe and South America created new nations keen to adopt modernity and standards that would align them with Western Europe. In all these cases, however, conversion was dictated by democratically deficient governments bucking the will of the people. The 1880s imposition of the metric system in Brazil led to a full-scale uprising that lasted months.

The strongest push in the U.S. actually came at the start of the 20th century, Alexander Graham Bell, Lord Kelvin, and other notables testified at congressional hearings on metric conversion. The hearings were shepherded by Samuel W. Stratton, the head of the new Bureau of Standards, who put forth the metric system as a vital national interest. Thinking they were joining a winning cause, lawmakers jumped aboard the metric bandwagon. But they were in for a rude awakening. Charges of elitism and wasting money came their way from a public that increasingly believed the U.S. should be the leader in global affairs and not just another follower.

Lip service was always paid to idealism and science as the reason for change, but politics and economics were the real incentives to go metric. The world’s most anti-metric nation—Great Britain—grudgingly began to ditch its Imperial system in the 1970s because it was the only way to gain access to the markets of continental Europe. Most of the rest of the world adopted the measures in order not to fall behind in the global economy, and that anxiety also fueled our own push toward it.

Americans were perhaps never more anxious than in the 1970s, and the Metric Conversion Act of 1975 is partial proof of that. American society turned unusually introspective in those post-Watergate days, even leading us to elect Jimmy Carter, the president who told Americans about their shortcomings like no other.

Ronald Reagan’s election sprang from a more familiar American attitude—that our problems were caused not by questioning our core values, but by drifting away from them. And it was Reagan’s axing of the U.S. Metric Board during his 1982 budget cuts that was seen as the deathblow to American metrication.

The notion that Reagan killed the metric system makes for a satisfying narrative, but it is spurious. The effort had already encountered stiff public resistance under Carter. And, Reagan actually signed a bill that required the federal government to go metric, a conversion achieved under George H. W. Bush.

Love it or hate it, there is no question that a uniform global system of measurement helps cross-border trade and investment. For this reason, labor unions were among the strongest opponents of 1970s-era metrication, fearing that the switch would make it easier to ship jobs off-shore. (Which it did.) The meter has never been a clear left-right political issue in this country, one more reason it has never gained traction.

Is global uniformity a good thing? Not when it comes to cultural issues, and customary measures are certainly a part of our national culture. But our measures are more than that. The metric system reinforces the idea that the world is ordered by tens. Base-10 math, however, originated in an accident of the hands. Ten is a poor choice, particularly when it comes to dividing. Thirds, quarters, sixths, eighths, and twelfths are all important fractions that are handled better in inches and ounces than in centimeters and grams. To have brains trained in such fractions as well as the relentless decimals of the metric system can only be beneficial, in the same way that learning a second language is better than knowing only one.

That ours is a dual-measurement country is part of our great diversity. We are the only republic on earth that predates the metric system, and that’s a major reason why we never fully joined the party.