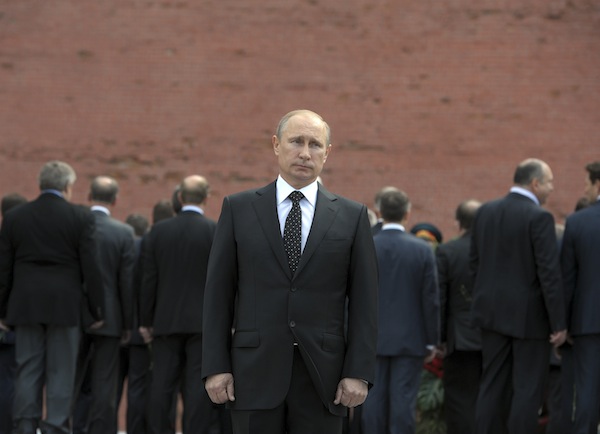 A year ago, Vladimir Putin had every reason to look forward to a victory lap. As he presided over final preparations for the Winter Olympics, he felt emboldened by his petrodollar riches and basked in accolades from the likes of Forbes magazine, which named him the “world’s most powerful person.” But 2014 turned out instead to be his annus horribilis, and, in all likelihood, the beginning of the end of the “Putin Era.”

Putin has had an extraordinary run since first being elected president in 2000, then stepping aside to be prime minister (under his hand-picked President Medvedev) and returning to the presidency in 2012. He’s mapped his career, and amended Russia’s constitution accordingly, so as to be able to remain president of Russia through 2024 (assuming a re-election in 2018), when he will be 72 years old.

Putin retains high approval ratings and there is no mass movement to rally against his regime. These facts have led many in the West to assume that no matter how challenging things get for Putin in the short term, he will remain at Russia’s helm for as long as he chooses. But such a view overlooks the possibility of an increasingly likely, and classic Russian, scenario: that of a Kremlin coup.

Because many people often forget, or never fully appreciated, the extent to which the Soviet Union collapsed as a result of domestic economic woes exacerbated by plummeting oil prices in the early 1980s, we might lose sight of the degree to which history may be repeating itself.

The year started so well. Despite widespread claims of corruption, the Winter Olympics in Sochi was a major success. However, no sooner was the Olympic torch extinguished than things took a turn for the worse. The so-called “Euromaidan” revolution in Ukraine, which had been prompted by its pro-Kremlin president rejecting a closer relationship with the European Union in favor of relations with Russia, resulted in President Yanukovych fleeing to Russia. And, as became his pattern throughout the year, Putin compounded bad luck and unfortunate events beyond his control with spectacular misjudgments and overreaching of his own. Not only did he refuse to recognize the new regime in Kiev and describe it as the result of an illegal coup, he seized on the disarray to illegally annex Crimea. This triggered Western sanctions against the Kremlin and individuals in its inner circle, and the spiraling sequence of events that followed: the low-grade conflict throughout eastern Ukraine brought into stark relief by the shooting down of a Malaysian airliner, the bullying and jockeying over gas exports and pipeline diplomacy, and the saber-rattling aimed at former Soviet republics. Even German Chancellor Angela Merkel took to calling calling Putin dishonest.

Meanwhile, Putin’s resources to underwrite this belligerence rested on a fragile foundation. Despite years of rhetoric about the need for Russia to modernize and diversify its economy, the country remains highly dependent on its energy and extractive sectors. The share of Russia’s budget revenue derived from the energy sector increased from 9.3 percent in 2000 to 50 percent in 2012, when the energy sector accounted for 30 percent of Russia’s GDP and 68.7 percent of its exports. For Putin, that amounts to putting all his Fabergé eggs in one basket so that his quasi-imperial project relies on volatile energy and currency markets, both of which are easily influenced by the very Western powers he loves to provoke.

Because many people often forget, or never fully appreciated, the extent to which the Soviet Union collapsed as a result of domestic economic woes exacerbated by plummeting oil prices in the early 1980s, we might lose sight of the degree to which history may be repeating itself. But certainly Putin, the former KGB agent who bemoans the fall of USSR, should be aware of the parallels. Here’s a trendline from the past that should haunt Putin’s sleep: energy went from accounting for less than a third of Soviet hard currency income in 1970 to accounting for 80 percent of it by the mid-1980s, as Thane Gustafson chronicled in his 1989 book Crisis Amid Plenty.

Increased global supply of oil has caused crude prices to plummet from more than $100 a barrel this summer to less than $60 this week, significantly shrinking the proverbial basket that holds all of Putin’s eggs. And even beyond the vagaries of international pricing from week to week, all is not well in the supposedly formidable Russian oil and gas industry. Since a dramatic slump in the 1990s, oil production has rebounded, largely by getting more out of the fields inherited from the Soviet Union. Western companies have played a major role in increasing output from traditional producing regions. More recently, new fields have been exploited in Siberia and offshore Sakhalin Island, for example, and Russia has been able to produce more than the 10 million barrels a day benchmark set by President Putin.

As oil prices rose in the last decade, the Kremlin’s coffers filled with petrodollars. However, those traditional fields are now well past their prime producing years and new sources of oil must now be developed to sustain exports into the 2020s. Having forced the international oil companies to cede control of key projects in 2006, Prime Minister Putin enticed them back in 2009 with the promise of access to the Russian Arctic. The result was a series of projects involving the likes of ExxonMobil, ENI, and Statoil, with over $55 billion in exploration funding promised in partnership with state-owned Rosneft. But these projects will take at least a decade to deliver new production. Russia’s room to maneuver has further shrunk as a result of this year’s Western sanctions that have deliberately targeted deep-water offshore, Arctic oil and gas exploration and “tight oil” beneath conventional fields in West Siberia. Such projects are now stalled and will remain so in the absence of foreign capital and technology, meaning the country’s oil output will decline in coming years.

The outlook for Russia’s gas industry is similarly cloudy, especially as Gazprom’s Western European customers seek to wean themselves from relying so heavily on Russian gas.

But those are long-term challenges. In the immediate here and now, the drop in oil prices has devastated the Russian currency—the ruble has now lost almost 50 percent of its value against the dollar in 2014. This creates a serious problem for Russian companies that owe $600 billion, payable in Western currency—a debt that sanctions have made very difficult to roll over or refinance. The wealthy tycoons surrounding Putin also don’t appreciate their impoverishment respective to the West. And, more broadly, the currency’s fall also makes imports far more expensive for Russia’s emerging middle class, unleashing inflationary pressures that erode people’s living standards and the premise that Putin equals stability and prosperity. The government’s own reserves are deep, but it has already spent $80 billion of its $400 billion stash of foreign currency in attempts to stem the ruble’s collapse.

The Kremlin now faces multiple demands on its limited resources, to help Russian companies meet their financial obligations and to shore up the banks. With recession a certainty, and falling revenues for oil and gas exports, it will be hard for Putin to please everyone. It will also be difficult to justify increased defense spending.

While the West will surely wish for Putin to seek closure in Ukraine and usher in an era of pro-market reforms to promote a more diversified economy—an opportunity missed in 2008-2009—he is far more likely to batten down the hatches and rely on the same old state-centric, top-down approach. In his annual year-end press conference this week, Putin doubled down on his defiance towards the West and his increasingly delusional optimism about the course he has embarked upon, saying the Western-inflicted recession will be short-lived.

So far Putin has been able to ensure that he faces no effective opposition and fully controls the media. His path to another six-year term is probably not going to be derailed by any Maidan-style or Arab Spring-type popular uprising. But what is far more likely, as Moscow’s elites get financially squeezed as a result of Putin’s recklessness, is a palace revolution whereby the Kremlin’s inner circle forces him to step aside, or avoid running again in 2018. Here the West needs to be careful what it wishes for, should the Putin era come to a difficult and premature end. There is no guarantee that Putin’s successor will be any easier to deal with, so there may be something to be said for the old saying “better the devil you know.”