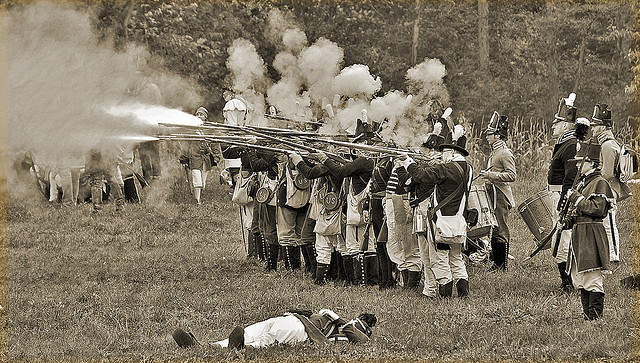 This Christmas Eve marks an American bicentennial—the 200th anniversary of the signing of the Treaty of Ghent, which ended the War of 1812. It’s hardly surprising that this event has been eclipsed by the centennial of World War I, the sesquicentennial of the Civil War, and even the normal hubbub of another holiday season. As the historian Alan Taylor has written, “The War of 1812 looms small in American memory.”

Does this war merit greater remembrance? The War of 1812 was ostensibly about securing American independence against the persistent threats of Great Britain. In the decades after the Revolution, Britain contested U.S. commercial rights in the Atlantic, forcibly commandeered (“impressed”) U.S. sailors, and seemed to obstruct U.S. expansion in the West. In June 1812, Congress officially declared war for the first time in its history.

Americans pushed aside the poor planning, vicious politics, sectional division, and martial ineptitude of the war, and instead celebrated an imagined unity, virtue, right, and might.

But that war was unnecessary and unwise—perhaps the first ill-advised U.S. war of choice—and U.S. military accomplishments were meager. The War of 1812 was largely a series of military disasters, and its greatest U.S. victory came in the Battle of New Orleans, fought on January 8, 1815, after the Treaty had been signed in Belgium. The peace settled none of the issues that inspired the stalemated conflict, with no agreement on impressment, free trade, or territorial concessions.

And yet it was quickly embraced by President James Madison and most Americans as a major victory. Instant myth was more palatable—and more useful—than genuine history. Americans pushed aside the poor planning, vicious politics, sectional division, and martial ineptitude of the war, and instead celebrated an imagined unity, virtue, right, and might. And even those who understood that the U.S. hadn’t won could take comfort in the fact that it had not lost. And by not losing to the greatest military power on Earth (no matter the mitigating circumstances of a Britain distracted by the Napoleonic wars), the United States affirmed its independence. In the war’s aftermath the country experienced an unprecedented outpouring of nationalism that further obscured embarrassing facts and fueled American economic and territorial expansion.

As public memory of the war quickly faded, a so-called “era of good feeling” emerged. Veterans groups sought to keep recollection alive, but, for the most part, the conflict and their service were folded into remembrances of more transformational wars before and after it — the Revolutionary War, and then the Civil War. The elevating claim that the war should be considered America’s Second War of Independence, never caught on, and it remained stuck with a descriptive label, barely a proper noun—that war of 1812. A children’s history book published in 1884 devoted just two pages to the struggle and concluded, “This was known for a time as the ‘Late War,’ but since then we have had more wars, so it would not do to call it by that name now.”

The war won some momentary prominence and reappraisal as the United States remade itself as a naval power in the Spanish-American War and in the years before the First World War. Early 20th-century leaders employed the maritime history of the war to advance a globalized vision for the United States in the new century. Some of America’s greatest naval heroes come from the War of 1812 (Perry, Lawrence, Macdonough, Barry, and Decatur). But the war itself had receded as an issue; at the 1915 centennial, Americans and Britons together celebrated a “century of peace,” not the war itself. Americans sought to forget the bitter anticolonial struggle against British “tyranny” and instead emphasized the common ground and shared mission of two imperial powers, one established and the other emerging, in a time of world crisis. They were, after all, entering into a war to end all wars at the time.

The War of 1812 did produce some American icons, including Uncle Sam and the Star- Spangled Banner. And in some places where it might boost civic pride and tourism, it continues to be recalled, as in Baltimore (where Francis Scott Key wrote the national anthem commemorating the defense of Fort McHenry) and New Orleans. In 1964, Plattsburg, New York, hailed the 150th anniversary of its War of 1812 battle with a week of festivities, commencing on the more illustrious date of July 4, even though the historic event being commemorated occurred in September 1814. The State of Maryland calculates the tourism dollars local businesses have reaped from its current “Star-Spangled 200” initiative in the hundreds of millions.

If we knew the history better, the War of 1812 could teach us plenty. It offers us cautionary tales about the political miscalculations of American leaders, the risks of rushing into war, and the dangers of military arrogance and ineptitude.

The U.S. military effort faltered from the start, when the aged and reluctant General William Hull surrendered Detroit without a shot being fired, though he commanded superior forces. Hull was later court-martialed and ordered shot, though President Madison issued a reprieve. Combat on the U.S.-Canadian borderlands was characterized by atrocities; everywhere fighting was inconclusive.

But the war’s aftermath was devastatingly conclusive for Native Americans who mostly favored Britain. For many Indian nations it was a struggle for their survival (against intrusive American “pioneers”). The British used Native American soldiers to contest U.S. expansion; Native Americans used the British alliance to protect their homelands. Yet in peace, Great Britain abandoned its Indian allies, forced into their own, separate treaty negotiations. The War of 1812 was thus as much an Indian-white conflict as it was a U.S.-British war, and Native Americans were its biggest losers. The tribes’ defeat and treaty fraud opened Indians lands to white settlers, and a series of removals (numerous “trails of tears”) forcibly relocated five Native American nations and over 50,000 Native American people west of the Mississippi. White settlement of these vacated territories simultaneously spread King Cotton and slavery into the Deep South.

The War of 1812 thus played a critical role in establishing United States sovereignty, especially relative to Great Britain, setting the nation’s northern boundary (after the failed U.S. effort to conquer Canada), and in decisively advancing westward expansion at the expense of Native Americans. Building on Thomas Jefferson’s dream, white Americans forged an “Empire of Liberty”—an expanding nation of freedom and opportunity for some, which came at the expense of others.

Since the end of the War of 1812 in the year 1815, the U.S. has fought many more wars (only four of them constitutionally declared, and none declared since 1942). In resurrecting its unimpressive memory, we might learn from its lucky victory as well: short wars are best, particularly when followed by long periods of peace.