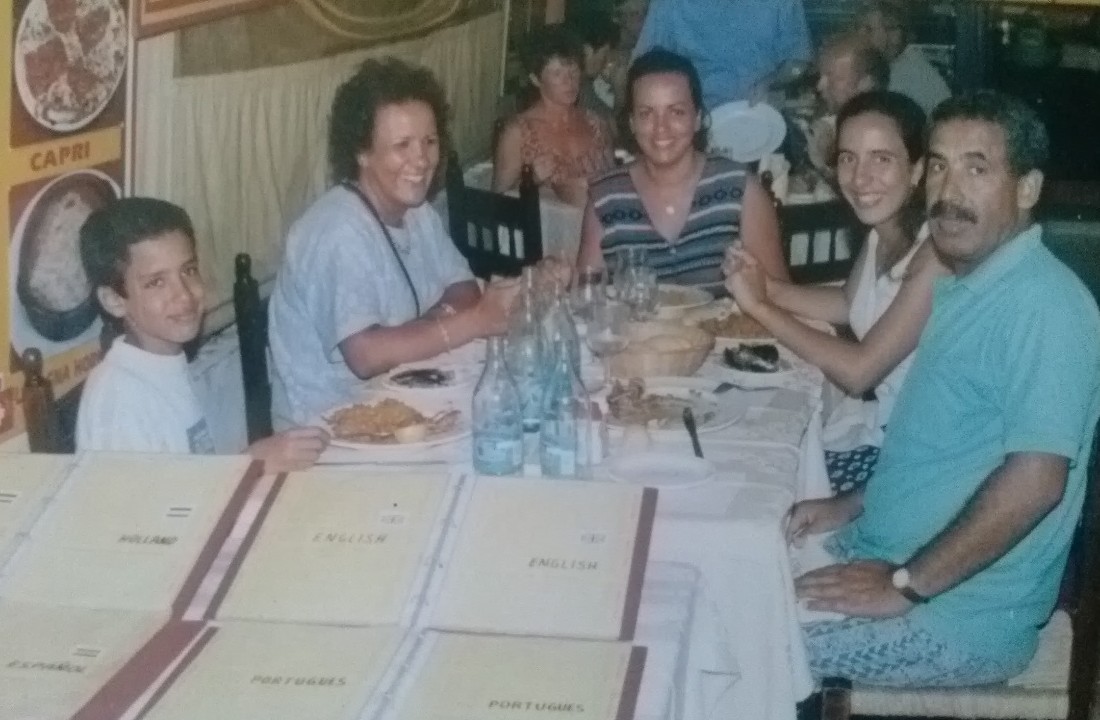 After I saw the horrible and terrifying news on my Facebook news feed, I just kept thinking, Oh my God—not Charlie Hebdo, not the magazine that made me laugh over the last 20 years. And then: Who did this and why? I had a knot in my stomach thinking it might have been done in the name of Islam. I wanted to be wrong so badly.

Sadly, I was not. I posted a picture my friends had been sharing that said, “Je suis Charlie.” I am Charlie.

I deeply hope that even though we all have different backgrounds, we can all live peacefully together in France. But let me be honest: I am a bit pessimistic.

I also am a French woman, a Franco-Algerian woman. I was born and raised in France, with its principles of liberty, equality, and fraternity. But I grew up within an Algerian family attached to its roots, culture, and traditions. And so the Charlie Hebdo shooting brought up complicated memories for me.

My father came to France in 1963, for economic reasons and, feeling the weight of tradition on him, for greater freedom. He didn’t know a French word at that time. When he was ready to get married, he asked a friend in Algeria whether he knew of any kind young women who might want to live in France with him. They married, and my mother emigrated in 1973. Between 1975 and 1983, they had me, my sister, and my brother here in France.

My father was able to find an affordable apartment in one of the wealthier Parisian suburbs with good schools. He drove taxi cabs by night, six days a week, at least 11 hours per shift, while my mom ran a kind of daycare at our apartment, taking care of us and other local kids. We had croissants and pain au chocolat with café au lait every morning, but my mom always made sure we had a couscous every Sunday at lunch.

As a taxi driver, dad knew every street and monument in Paris. He often took us to visit the city’s landmarks, telling us stories he had learned about their history, and treating us to a nice restaurant meal afterward. It was not important whether the food was halal or not.

I discovered some of the Charlie Hebdo cartoonists who were killed when I was around 5 or 6. Jean Cabut—known as Cabu—collaborated with a children’s TV program. I remember watching his show that taught kids to draw; his drawings were always very funny but tame, since the show was for children. He always smiled like a kid, and we all loved him. I also remember seeing drawings by Stephane Charbonnier—known as Charb—when I was 25. My favorite cartoon of his is Maurice et Patapon. Maurice is a bisexual, anarchist dog infatuated with defecation and sex; Patapon is a fascist, ultra-liberal cat who mocks the suffering of others. Those two are horrible, rude, and politically incorrect—and they’ve made me laugh so loud.

When I saw Charlie Hebdo cartoons about God and Muhammad, I must admit I smiled. They were funny and relevant, and they also mocked other religions. I didn’t see Charlie Hebdo as singularly targeting one community. I thought the newspaper had a right to publish the cartoons, though I have also been afraid that they might provoke intense reactions in the French Muslim community.

I don’t practice Islam anymore, though my parents do, and I believe that something or someone bigger than me, than every thing, exists. The Islam my parents know is tolerant, easy to practice. They pray to God daily and fast during Ramadan. They even went to Mecca. But they never took me to the mosque, and my father never asked me to wear a hijab, the head covering for women. For him, the best outfit for a student girl was a pair of jeans and sneakers. “We live in France, so we should live as French do, without committing any sin that Islam condemns,” he used to tell me.

He raised me with the idea that God knows our intentions and that Niya (the wish to please God) is more important than the result. A Muslim woman who wears a hijab but does not offer food to a poor man at her door is not better than a man drinking alcohol who helps those in need.

In 1984, my parents decided to return to Algeria—fulfilling a dream of going home. They wanted us to learn Arabic and live according to our traditions. It was a time of hope for democracy: In 1988, the Algerian government opened up elections to parties other than the Front de Libération National, the only political party allowed to exist after Algeria became independent in 1962.

But then fundamentalist Islamic movements began appearing. Some leaders of the Front Islamique du Salut, the Islamic party, started to call for terrorism in the name of God. Journalists, policemen, soldiers, women, and students were killed. I heard my parents debating what was happening to Islam. After each attack in Algeria, they would wonder how people who believed in the same God as they did could attack their fellow men.

We saw the leaders of mosques telling women that they had to obey husbands and fathers. Girls became less welcome at school, and sometimes I was afraid to go. At 14, I remember a teacher of Arabic literature filling our heads with Quran verses that purported to prevent a girl from leaving home. A cousin tried to prevent me from listening to Madonna and Michael Jackson, because he thought I should only be listening to Quran broadcasts. If we stayed, my parents thought my sister and I might end up as stay-at-home wives who were expected to shut their mouths.

My parents had ambitions for my sister, my brother, and me. They wanted us to be safe, to study, go to college, and become citizens who thought about our rights and improved the society we lived in. So, when I was 15, in 1990, we returned to Paris.

The more I’ve lived, the more I’ve understood how special France is. The main foundation of our republic is a separation between society and religion. Here, God, faith, prayer, and dogma are very private items. You’ll never hear a president talking about God. He or she will never swear with a right hand on the bible or any book except the country’s constitution.

The point is to guarantee the freedom of conscience and religion, to prevent any religion from dominating, and to promote the idea of “vivre ensemble”—living together.

The Charlie Hebdo shooting is an attempt to divide our country. But what I see is the whole nation standing up together, raising pens against weapons, and chanting together, “We are Charlie.”

I deeply hope that even though we all have different backgrounds, we can all live peacefully together in France. But let me be honest: I am a bit pessimistic.

Being Muslim in France, nowadays, is really difficult. There is a worrying rise in Islamophobia in France, in Europe, and all over the world. I think my recent difficulties in finding a job have to do with my first name being Mounira. There have been recent news reports about how difficult it is for “outsiders” to find an apartment, especially if a person’s name is Mohamed or Djamel, and even if he has a great job, a high level of study, and a very correct French accent.

Of course, I don’t believe all French people have this kind of prejudice, and certainly some Muslim communities have issues like delinquency, drug use, and their own prejudices. But I think the main victims of prejudice and the rise of fundamentalist terrorism are regular Muslim people who only want to live in peace with their neighbors and not to have to apologize for acts they did not commit. How difficult will it be for a woman wearing a hijab to take the Metro to go to work? How many times will she feel herself watched, questioned, judged? It won’t be good for my family that two brothers suspected in the Charlie Hedbo terrorism are of Algerian descent. They do not represent us.

The journalists that were killed Wednesday lived according to the spirit of Voltaire and Diderot. I would love to live in a France where all of us can hold those ideals.

These nights I will be re-reading a book I’ve already read to my young children—Charb’s C’est Pas Là Qu’on Fait Caca (Here’s Where We Don’t Poop). I want them to grow up saying whatever they want and laughing at whatever they want, however rude. I believe that if God exists, he or she has a fabulous sense of humor.