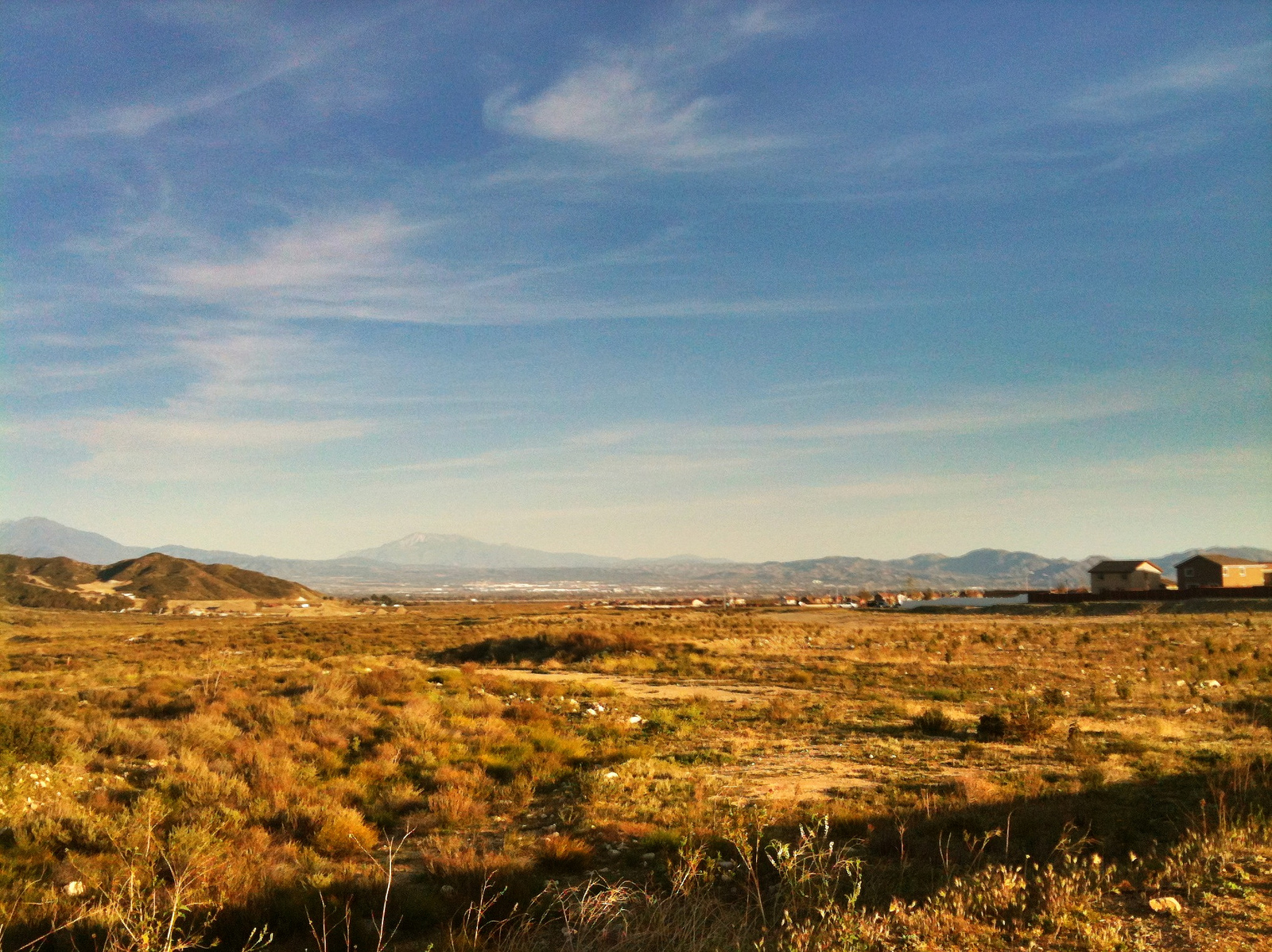 If you want a classic portrait of middle Americana in the middle of the 20th century, you had to look no farther than my hometown of Rialto, in inland Southern California, 50 miles east of Los Angeles.

My youth on King and North Verde streets was about American kid stuff—baseball, bugs, riding my bike, my crush on a grammar school classmate named Katherine, playing John F. Kennedy in the Kennedy-Nixon mock debates at school, trying to make new Levi’s look worn, swimming during the summer at the officers’ club pool at the Air Force base, watching Andy Griffith and The Mickey Mouse Club (the first letter I ever wrote anyone was to Mouseketeer Annette Funicello).

I ran away from home once. That entailed walking about 100 yards on the railroad tracks near our house. I came home because I got hungry.

That was life in Rialto in the 1950s. You never saw any drugs. You stood up when the flag was raised. You didn’t call adults by their first names.

And you saw more and more kids show up, because America was a place that grew. New elementary schools popped up everywhere. When Eisenhower High School opened, President Dwight D. Eisenhower attended the dedication.

Perhaps that’s why, when my mom decided to pitch kids from our school, St. Catherine’s, to the CBS afternoon TV show Art Linkletter’s House Party, the staff who prepared one of Mr. Linkletter’s feature segments on the show, “Kids Say the Darnedest Things,” quickly agreed.

So one day, three classmates and I traveled to L.A. We had lunch at the Farmers Market and were given a tour of the studio. Then we were told by the show’s “teacher” who prepared us for the taping that Mr. Linkletter would ask each of us to ask him one question, and that we needed to prepare that question ourselves.

I was the first kid to be interviewed. Linkletter looked at me and said: “So, Ernest, what did you want to ask me?”

“Mr. Linkletter, what political party do you belong to?” I asked.

The audience laughed. Linkletter did not pause—he answered, with a smile, “Baptist.”

The audience laughed again. We chatted some more about school, hobbies, and other kid stuff. He winked at me, then went on to the next kid. The show aired on March 26, 1959. We were so well received that we went back a second time about two months later.

Such moments of light were sometimes shadowed in Rialto. There were adults, including my father, who were alcoholics. I knew the bars in Rialto (the Rainbow Room, Jimmy’s) because I walked into them often to ask my dad to come home as my mom sat in the car. I knew what a whiskey Coke was before any other kid in town. I hated trying to get him to leave these dark places; they seemed like fun.

There were a lot of rules at that time, and parents and teachers struggled to relay all of them to us. Until eighth grade, I attended St. Catherine’s, where all the teachers were Franciscan nuns who kept me anxious about whether I’d die and go to hell. We were taught that the big-ticket sins—mortal sins—sent you right to hell. For the venial ones, you went to purgatory. You got rid of all of them by going to confession.

But when I went to that heathen new high school, Eisenhower, we were less anxious. On Monday nights, to keep us godly, I had to go to Catechism class. We’d ask the teacher, “Mr. Dowd, how much can you steal so that a venial sin moves to a mortal sin? What if you keep it under $100? And, what about kissing my girlfriend? If I kiss her more than once, is it a mortal or venial sin?”

Poor Mr. Dowd tried to answer as best he could: He reached the conclusion that stealing more than $100 was a mortal sin, and encouraged us to hold hands instead of kiss.

Not all teachers were so ham-handed. Red Bates, my coach on the Pony League Baseball Hi-Testers, was like a second dad to me. I wanted to be good in baseball, and he made me better than I thought I could be.

Mr. Bates had been drafted out of Iowa by the Yankees in the ’30s as a left-handed pitcher, and he brought professional standards to his coaching (his career ended early due to a back injury). You had to show up at the ballpark with a clean uniform. When sitting on the bench, you had to know the score and the count, or Mr. Bates yanked you. You played to win—it was more fun. But, in playing to win, you gave great respect to your opponent. These rules made more sense than so many of the others teachers and coaches tried to impart.

I’m sad to say that, for as much Mr. Bates meant to me, I didn’t talk to him for years after high school. At San Bernardino Valley College, I started Students for Peace in opposition to the war in Vietnam. And I made a big assumption about him—I believed he was too old-school and politically conservative to understand what I was up to, and that he would be displeased with me if I told him.

Then, one day, at about age 40, I was driving to Rialto to see my mother. I don’t know what spirit hit me but I decided to go see Red Bates. I drove to his house (I found it out of pure memory), got out of my car, walked to his front doorstep, and rang the doorbell. He opened the door. I froze for just a moment. You see: I was standing three steps below the front door, and that angle caused me to look up to Mr. Bates from the same angle I had as a 14-year-old. I swear I thought he would tell me to run a lap or ask me for the score.

He looked at me and immediately said my name. He opened the door, offered his hand, and said, “Come in.”

We sat together for four perfect, wonderful, endearing hours. He had, of course, aged a great deal, but he was still Red Bates and still my coach.

We replayed the signals he threw to hitters as he coached third base. And we went through his signals to me as a catcher. Glove hand to the side was a fastball. Wiggle the glove hand was a curve ball. Hand straight up meant walk the guy. We both remembered all of that.

I then changed the subject to what had haunted me for years. I said, “Mr. Bates, you know I opposed the war in Vietnam. That was not easy for me as a son of a lifelong military man. But, I did it with integrity and from the best values I knew; I thought my country was wrong in those years. I did not visit you for all of these years because I was afraid to—I was afraid you would be angry with me.”

I so loved Red Bates, and I had been wrong about his views. To hear him, someone I knew to be thoughtful and straightforward, say that about me was one of the best moments of my life. I then asked him to sign a baseball for me to keep. He walked into his bedroom and pulled out a big league baseball manufactured in the early ’40s and never taken out of its original box.

I still have it, a memento not just of Red Bates but of Rialto. Sure, I heard gossip and saw pettiness there. But I also saw how a nation, and a national perspective, could shape local life in the best of ways. I saw schools get built. I saw neighbors care for each other. I saw my dad pull the car over and get out so he could stand and salute when we visited the Air Force base while the flag was being lowered.

Since then, I have been part of protests against the conduct of my country. I have been part of political movements for justice and equality. And I have had to answer questions harder than Mr. Linkletter’s. I think I participate because I always wanted my country to be, in the words of Kurt Vonnegut, a place of “humane harmony.” I want the whole country to be like the American place where I was raised. 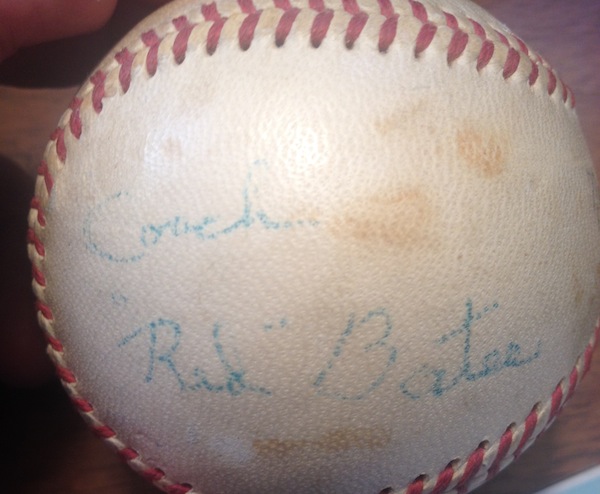