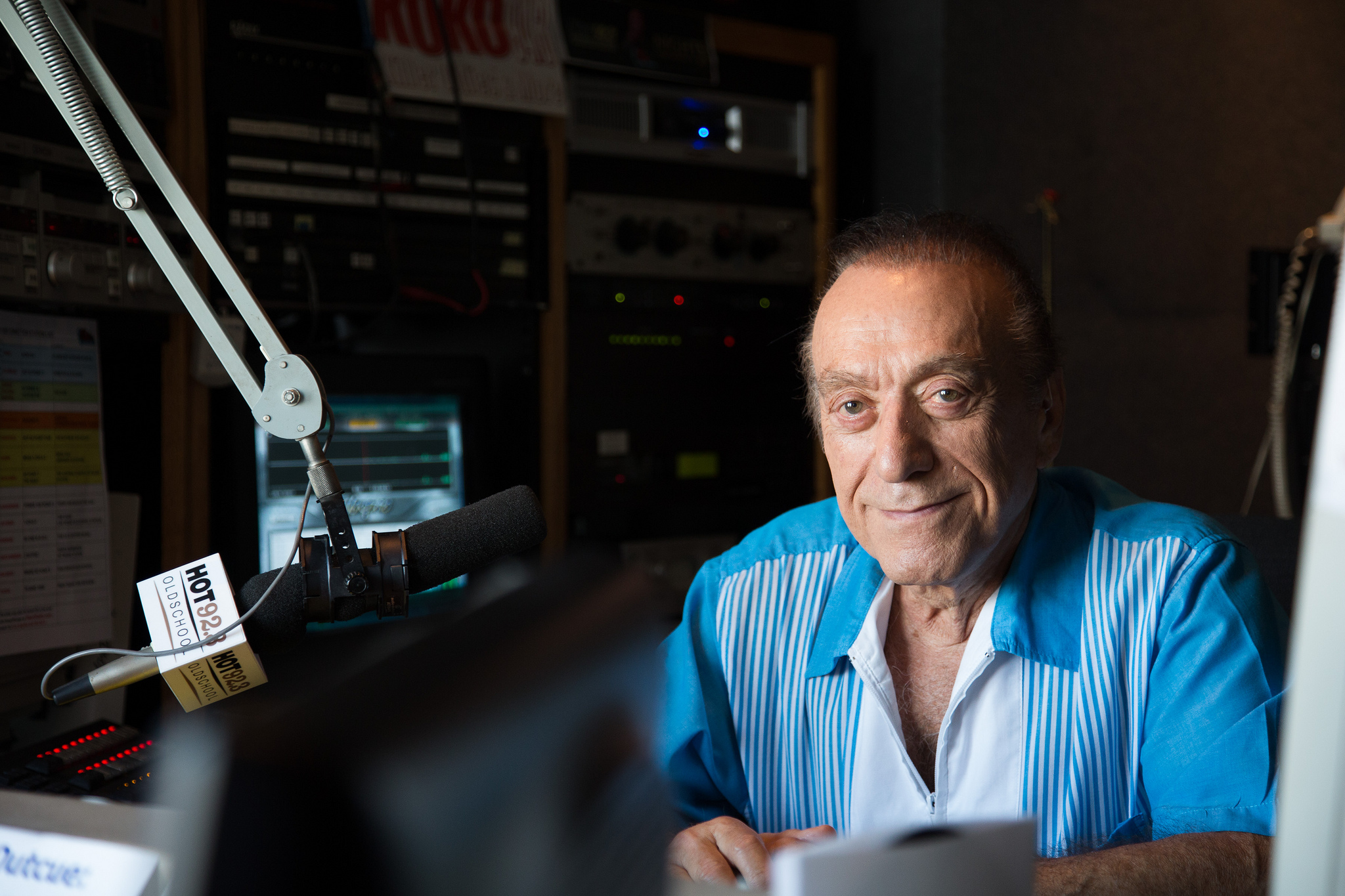 The town I live in is lonely. So lonely I could cry. So goes the refrain from one of Thee Midniters’ hits, and such is the feeling in my heart now that DJ Art Laboe has been taken off the air in Los Angeles because his station changed formats. HOT 92.3, which played old-school R&B, has become REAL 92.3, “LA’s Hip-Hop N’ R&B” station. If you don’t know, 89-year-old Laboe is the one of the last pieces of living history connecting L.A. to the origins of rock and roll radio—a lineage that includes Wolfman Jack, Alan Freed, and Dick Clark.

Art Laboe had been hosting “request and dedication” radio shows for more than 60 years when I first fell for him in 2006. As a night P.A. for a TV network sitcom, I delivered scripts around the midnight city for the producers, writers, actors, and executives to find on their doorsteps the following morning. Laboe’s playlists eased my journeys through the hazy maze of freeways. Listening to him, I learned the intersections of L.A.—its geography and musical history. His signature blend of smooth old-school R&B conjured a nostalgia in me for the birth of West Coast rock and roll in post-war Los Angeles, an era long before my time.

In the 1950s, Art Laboe had his first hit radio show with a Friday night live broadcast from Scrivener’s Drive-In Restaurant in Hollywood at the corner of Sunset and Cahuenga. In that American Graffiti-esque setting, Laboe took requests from teenagers in their cars. Fifty years later, I’d pass this corner most nights when I was finishing my deliveries. Scrivener’s had become a Jack in the Box. So it goes.

Without Art Laboe on the air, we have lost more than a radio show; we’ve lost a lifeline.

When Laboe began to host concerts in 1955, he did so outside L.A. city limits to accommodate his multiracial teenaged audience. Rock and roll had grown popular with white youth, and LAPD Chief William H. Parker and the L.A. City Council cracked down on integrated dances, so promoters like Laboe looked elsewhere in the county. Thus began Laboe’s relationship with El Monte, which allowed teenagers to dance freely together, and the El Monte Legion Stadium. Laboe’s audience packed the stadium every other week to jump to the sounds of R&B and to slow dance to the Penguins’ “Earth Angel.” The concert series, and the lowrider culture that grew around it, sealed the devotion of Art Laboe’s working-class Chicano fan base.

In a footnote to that history, Laboe released a single by the Penguins in 1963, “Memories of El Monte,” that was co-written by Angeleno and doo-wop fanatic Frank Zappa. The song refers to those early concerts:

Remember the dance I held you so tight,
The Satins were singing “In the still of the Night.”
You gave me your heart and your love undying,
Now I’m alone, I’m sitting here crying.

Memories of El Monte are all that remain. The stadium was torn down in 1974, and now it’s a post office parking lot. So it goes.

Around the time of the Zappa song’s release, Laboe coined the term “Oldies but Goodies” (he owns the trademark) and he’s been playing them ever since. But his Oldies but Goodies are not the songs of Oldies stations everywhere. You’re not likely to hear the Beatles or the Stones; rather, Laboe’s repertoire consists primarily of Chicano Soul, which blends doo-wop, R&B, and soul. Every jam is a slow jam.

Art Laboe endured because he also adapted to include newer artists that fit this feeling into his playlists, like Sheila E., Boyz II Men, En Vogue, and Babyface. But Laboe stood out because he mixed hits from well-known artists like Smokey Robinson and Etta Baker with deep cuts from more obscure ones—Brenton Wood, Barbara Lynn, and Thee Midniters.

One of the tragedies of Art Laboe’s departure from the L.A. airwaves is that we can’t hear bands like Thee Midniters anywhere else on the radio here. But the deepest loss is the dedications themselves. In contrast to Delilah, the reigning queen of the request and dedication show, who dispenses advice to her lovelorn callers, Art Laboe lets the songs give the advice. He serves merely as a messenger of dedications with a classic radio voice. He also records and plays listeners’ dedications in their own voices. As such, his show functions like a Post Secret for his audience: the dedications are full of apologies, nicknames from the neighborhood, and bilingual declarations of love in all its forms: familial love, love lost, love re-found, and, most crucially, love maintained in the face of separation.

Art Laboe’s highest achievement is that he connects people separated by distance and time, which is particularly helpful for people with incarcerated family members. His show has been a longtime favorite among prisoners in the California Department of Corrections and Rehabilitation, and callers often dropped hints: Every time I heard, “We got your letter,” or a dedication went out to someone “up in Chino,” I assumed its intended recipient was locked up there. Without Art Laboe on the air, we have lost more than a radio show; we’ve lost a lifeline.

The other night I listened to Art Laboe’s show online, and a dedication came on, along with a request for “The Agony and the Ecstasy” by Smokey Robinson. I heard a woman pledge to her husband: “I’ll always be here for you, you don’t even have to worry about it.”

I can’t say whether her husband is serving time, serving in Afghanistan, or driving a long-haul truck, but it was clear from her tone that he’s far away and not coming back soon. How often are we able to bear witness to enduring love? How often do we see, or hear, such intimacy?

Hence the name of his show: The Art Laboe Connection. Laboe connected us to our city’s history, and he connected us to couples experiencing the same agony and ecstasy felt in every household at some point. 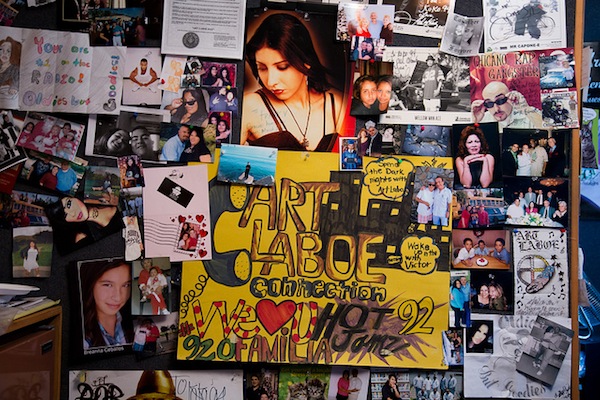 The other secret of Art Laboe is that he still resonates with young people just like he did at Scrivener’s Drive-In. Most of the outrage I’ve seen since his station changed formats has come from some young community organizers and artists I know. These sophisticated music fans are equally likely to be listening to Kendrick Lamar, Immortal Technique, or Radiohead, but they were raised on Art Laboe, and they found his show to be as healing and moving as I did.

I still reach for the HOT 92.3 radio preset when I’m driving home at night. But Art’s not there, and evenings in Los Angeles are decidedly less romantic.

The only consolation is that you can hear his show most nights of the week on the outskirts of Los Angeles—in Oxnard, San Diego, Barstow, and Bakersfield. He’s also still on in Tucson and Las Vegas, and you can listen online at Fresno’s KOKO94.com. While I’m hopeful that Laboe will find a new home in Los Angeles, I appreciate the irony of missing his music. I’m in love with something, someone, who’s far away. The town I live in is lonely. So lonely I could cry.