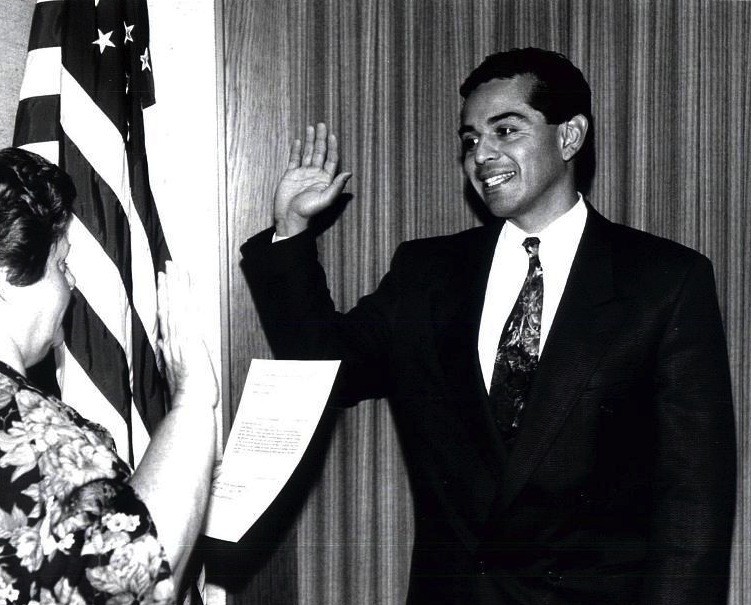 Villaraigosa didn’t get that opportunity over the past six weeks as he pondered, and ultimately decided against, a campaign for the U.S. Senate. Instead, in the media coverage and public discussion of the political drama, he was portrayed as one thing above all: the Latino candidate.

Villaraigosa’s supporters and opponents couldn’t stop talking about just how Latino he is. His fans expressed hopes that he would be a historic Latino candidate. Opponents pointedly said that Latinos don’t vote at high rates as they urged him to skip the race and support Attorney General Kamala Harris. And then critics of those opponents claimed that pushing the Latino candidate out of the race was an insult to Latinos.


It was as if Villaraigosa being Latino was all that mattered, never mind if he was a terrible or terrific mayor.

The media gleefully played up the possibility of ethnic clashes between Latinos backing the Latino candidate and African-Americans backing Harris, who is African-American and Indian-American. “Ethnic battles brewing in 2016 California U.S. Senate race?” asked a San Francisco Chronicle headline. And when Villaraigosa announced last week that he would not run—citing family and hinting at a preference to run for governor in 2018—the absence of his Latino-ness from the race was mourned. Villaraigosa was “leaving California Latinos without an immediate standard-bearer for the office,” the Sacramento Bee reported.

In the face of this relentless ethnic reductionism, the best response may be: Ay Ay Ay Ay Ay. If one of this era’s most complicated, accomplished, and frustrating Californians can be defined so narrowly, then what hope do the other 38 million of us have to be considered as full and complex humans, products not only of our heritage but also of our deeds and dreams?

While media and political figures may think all the Latino talk is a celebration of a rising demographic, it has a nasty edge. Such conversation can sound like an attempt to cage an incredibly diverse array of 15 million Californians in a single minority box. And that in turn perpetuates the societal assumption, still maddeningly prevalent in 2015 California, that Anglos define the mainstream.

The recent Villaraigosa coverage demonstrates the durability and absurdity of this mindset. Put simply, it’s hard to think of a more mainstream California figure than a former Assembly speaker and two-term mayor of Los Angeles, our largest city. It’s also hard to think of a more interesting Southern California political figure of the last generation than Villaraigosa. So when media and politicians try to define such a kaleidoscopic figure in such a narrow way, it’s fair to question their motives.

I’m still stunned by how hard it was to find details of the real Villaraigosa story in all these recent Villaraigosa political stories. I counted one column about his terms in Sacramento in the late 1990s, a time of momentous (and damaging) decisions for the state on energy, budgets, and pensions. And there was precious little assessment of his enormously consequential eight years as mayor—which saw dramatic victories (particularly in policing and public transit) and dramatic defeats (in education policy and in the local economy during the Great Recession).

The central questions that should be asked about a politician went unanswered: How does he make decisions? Did his tenure leave his city better or worse off? What would be his policy priorities as a senator? It was as if Villaraigosa being Latino was all that mattered, never mind if he was a terrible or terrific mayor.

The irony of this relentless focus on Villaraigosa’s Latino identity is that the mayor spent much of his time in office focused on inclusion and breaking down ethnic barriers. In fact, one serious criticism of Villaraigosa’s mayoralty among Angelenos is that he spent too much time visiting every cultural corner of the city (the mayor did more bar mitzvahs than many rabbis), and not enough time on the details of governing.

Pride in who we are is vital, but aren’t we overdoing it? When my sister graduated from law school at UC Berkeley a couple years ago, the commencement ceremony consisted of speaker after speaker, including U.S. Attorney General Eric Holder, talking about their ethnic backgrounds. I listened in vain for two hours for someone to offer a compelling idea or argument at this scholarly event. And I left angry—but that’s probably because I’m Scots-Irish.

Conversation about our diverse backgrounds is great. But not when it comes at the expense of substantive thinking about our communities and our problems. The last legislative redistricting commission process focused so much on questions of race that it largely ignored the roles of economy and media in defining community. And I’m still recovering from the coverage of the appointment of Leondra Kruger (a friend from high school and college) to the California Supreme Court. The media focused almost exclusively on the fact that she is young and African-American, and said almost nothing about her beliefs or what she might be like as a judge.

Personally, I’ve gotten a heavy dose of this kind of thinking as an editor for Zócalo Public Square, which produces this column. Zócalo’s journalism and events cover every conceivable topic, from ornithology to outer space. Nonetheless—perhaps because of our Spanish name and because our founder is Mexican-American—I’m sometimes asked why I left journalism to work for a Latino advancement organization.

Another downside to California’s ethnic obsession is the degree to which it prevents us from embracing our shared origins as Californians. The majority of Californians, for the first time in modern history, have been born and raised in the state. So while it’s worth noting that Villaraigosa’s parents and grandparents came from a different place than mine (or those of rival politicians), that fact should take a back seat to discussions of his record and qualifications to improve living standards across the state.

Because at the end of the day, our next governor and senator need to be standard bearers for the one demographic that often gets neglected in our obsessing over identity: Californians.