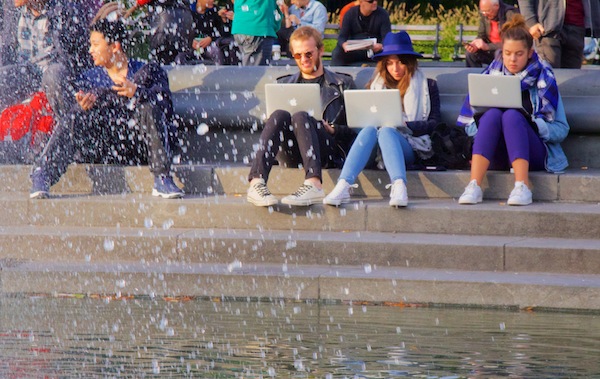 The Japanese television crew and excitable L.A. producer were the first signs that something unusual was happening at MIT.

It was a warm evening in April, barely a week after a pair of mad bombers had terrorized the city of Boston and shot a campus security guard dead in front of Building 46, the glass-and-stone complex I was standing inside. Most colleges name their structures after wealthy donors. MIT likes to keep things rational, so when the Brain and Cognitive Sciences Complex was completed in 2005, the administration just gave it the next number in line. As I walked through the building’s 90-foot-high atrium toward a nearby lecture hall, I recognized many of the students who had, like me, spent much of the last semester learning about genetics from one of the smartest people in the world.

“Introduction to Biology—The Secret of Life” is a mandatory course for all MIT freshmen. It’s taught by a professor named Eric Lander, who is a walking advertisement for the triumphs of American higher education. Born in the working-class Flatlands neighborhood of Brooklyn, Lander tested into Stuyvesant High, an elite New York City public school, where he discovered an aptitude for math. From there it was a rapid climb up the ladder of academic meritocracy: International Math Olympiad, Princeton valedictorian at age 20, Rhodes Scholarship, Harvard professorship, MacArthur “Genius” award.

But unlike some of his monastic colleagues, Eric Lander was a sociable person with eclectic intellectual tastes. Pure mathematics were beautiful and thrilling, but they were also a solitary pursuit. Lander liked to interact with other smart people and dive into whole new fields. First he switched from exploring math to teaching economics at Harvard Business School. Then a connection with an MIT biologist led him to the field that would become his calling: uncovering the mysteries of genetics. Lander led the Human Genome Project, which created the historic first complete sequence of human DNA. He went on to co-chair President Obama’s Council of Advisors on Science and Technology and found a multidisciplinary medical research center. When the Boston Globe listed the 150 most important things ever done at MIT, Lander and his work ranked second, after the guy who invented the World Wide Web.

Lander is also a very good teacher. Many great scholars are inept in the classroom. Their intense, internal focus works against them when it comes to forming connections with students. Lander is outgoing, personable, and almost as good at lecturing as he is at discovering new ways to unravel the meaning of human DNA. As I entered the lecture hall where his class would take place, a group of freshmen had already staked out seats in the front row. One, a young woman named Abbey, was standing expectantly by her desk, holding a cupcake in a plastic box. Abbey grew up in a suburb of Salt Lake City. Her father said he would only pay for her to attend two colleges other than Brigham Young: Harvard and MIT. So she aced her college boards and made the trip to Cambridge, Massachusetts. As Lander reached his lectern, she walked up to him, face flushing, and gave him the cupcake. “Happy anniversary!” she said, before quickly turning back to her seat. Because of this class, she later told me, she plans to major in chemical and biological engineering.

I settled into a seat in the back row, flipped up the desk, and pulled out my study materials. After two months of watching Lander lecture, my class notebook was almost full. We had begun with the building blocks of biochemistry before proceeding on a long voyage of intellectual discovery, through Mendelian genetics, Crick and Watson’s double helix, and the modern age of biotechnology. Lander used a storyteller’s flair for drama as he worked through complex explanations of biochemistry, genetic mutation, and RNA transcription. When his tales reached a point of crucial discovery (often involving a Nobel Prize awarded to one of his MIT colleagues), you could see sparks of enthusiasm in his eyes—even from the last row.

After each lecture, my fellow students and I would retreat to our laptops to tackle MIT’s famously challenging “problem sets,” exercises meant to test and solidify the knowledge we had gained in class. I found myself staying up late at night, trying to make sense of RNA base pair chains and a list of stop codons, restriction enzymes, and plasmids. But I could always ask other students or teaching assistants for help—MIT encourages this—and I eventually made it through the assignments. At the end of the semester, I passed the two midterms and the final with a respectable 87 percent average. In exchange, MIT gave me an official university document certifying that I had completed “Introduction to Biology—The Secret of Life.”

Yet I was not, and never have been, an MIT undergraduate. I did not fill out a college application or financial aid form or write a personal essay explaining why my life-altering experience founding a shelter for homeless marmots made me uniquely qualified to attend MIT. In fact, until that evening, I had never set foot on the MIT campus in my life. Nor did I pay MIT any tuition, which runs over $42,000 per year, plus another $15,000 for books, fees, and room and board. The entire “Secret of Life” course—lectures, problem sets, class forums, exams, and certificate—was totally free.

And I wasn’t the only one. At the same time, all around the world, tens of thousands of other students were taking “The Secret of Life” for free. There were doctors and medical students from South America, a group of high schoolers in Greece, a 72-year-old retired chemist living in the Netherlands, a Sri Lankan college dropout, a full-time homemaker in India, a Ukrainian software engineer, and a nurse in the Philippines. One young woman wrote on the class message board, “My dad is letting me take this instead of my regular eighth grade science. I am 13 years old.” Most of them had never been to the United States and could not imagine experiencing, or affording, an elite American education. But they were, in most of the ways that mattered, doing exactly that.

That’s why, throughout Lander’s lecture that evening, a small team of camera operators from Japan’s NHK Japan Broadcasting Corporation) television network prowled the sides and back of the lecture hall, shooting a news documentary under the direction of a California-based producer eager to get shots of Lander and his students at work. It’s also why the Japanese camera techs had to work around an entirely different production crew that was also in the room, filming Lander from a variety of angles in digital HD.

The class was being produced by a brand-new online educational organization jointly run by MIT and Harvard University. For the better part of the last 150 years, those two institutions have sat, less than two miles apart, at the zenith of global higher education. They are bitter rivals for the world’s best scholars and students. Yet they had, in this time and place, decided to put their rivalries aside.

This unlikely collaboration came about because higher education now stands at the brink of transformation by information technology. Harvard and MIT are accelerating seismic forces that threaten colleges that have stood, largely unchanged, for decades or more. These historic developments will liberate hundreds of millions of people around the world, creating ways of learning that have never existed before. They will also upend a cornerstone of the American meritocracy, fundamentally altering the way our society creates knowledge and economic opportunity.

Whether they know it or not, Harvard and MIT are helping to build a new and unprecedented institution: the University of Everywhere.