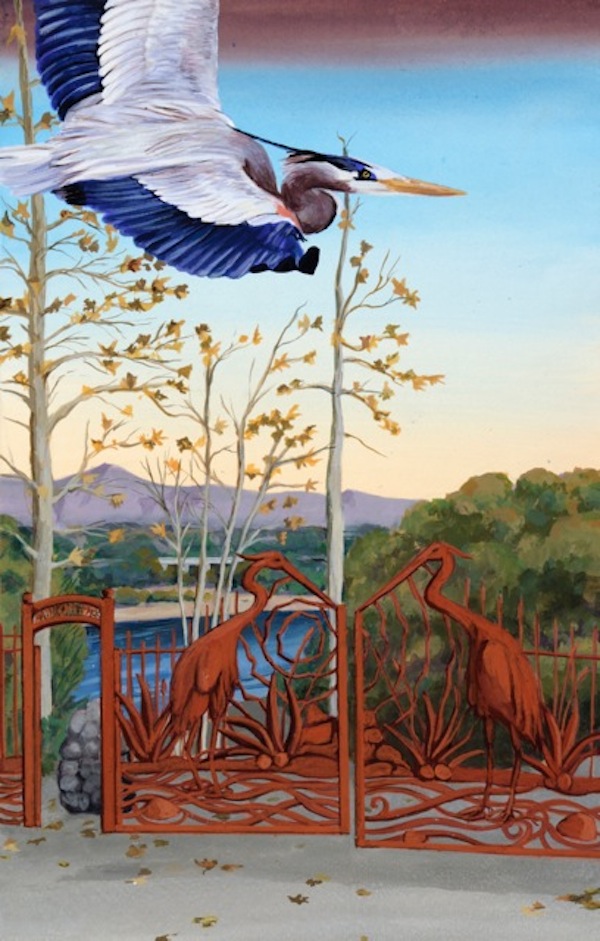 As a native Angeleno, I’ve always felt that L.A. is rarely seen for all of its history, diversity, and character. Tourists only visit Venice Beach, Hollywood, and Universal City, maybe downtown, and call it a day. They miss out on all of the city’s interesting middle parts. It wasn’t until I started exploring the city for a series of paintings called 100 Not So Famous Views of L.A. that I realized how much I had to learn about the city.

I got the idea for the series in 2007 after I saw an exhibition of woodblock prints by Hiroshige, a 19th century Japanese printmaker and master of ukiyo-e (“pictures of the floating world”). I bought a book of his work, One Hundred Famous Views of Edo, and spent months studying the prints and text.

When I began my paintings of not so famous views of L.A. in 2007, I didn’t have a long-range vision, just the vague notion that I would attempt 100 paintings of views within L.A. city limits. My plan was to use the Japanese bokashi technique of smooth color gradations, and paint in the vertical and relatively narrow oban format. I chose to use cel-vinyl paint, which is made here in Los Angeles for the animation industry and resembles Japanese woodblock ink.

Between painting every night and teaching, I explored L.A. I started close to my home in Franklin Hills with places that resonated for me and spiraled out across the city from there. Soon, the series took on a life of its own as I kept finding visually interesting places. The more I saw and learned, the more obsessive I became. In 2010 alone, I did 28 paintings. When I hit 100, I was still consumed by the project, so I just kept painting. A friend did an intervention at 107, and I finally stopped. 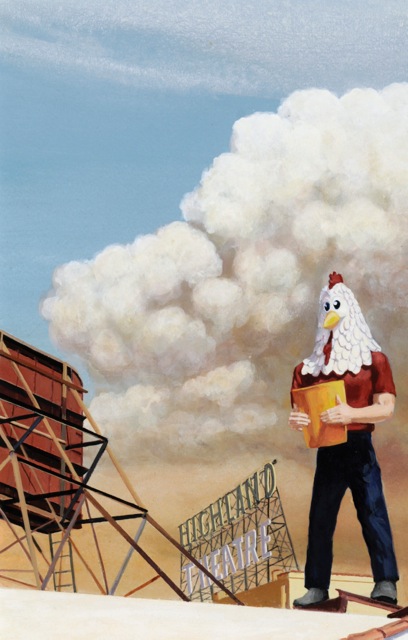 Chicken Boy with the Pyrocumulus Cloud
2009

My 100 not so famous views of L.A. include paintings of the L.A. River, which is the reason L.A. exists in this location. I painted the 900-foot North Broadway Viaduct, built in 1911 to offer train travelers their first grand view of Los Angeles. It is a graceful and fitting introduction to L.A. And I painted “Chicken Boy,” the 20-foot high sculpture of a man with a rooster head holding a bucket of chicken that once graced a long-gone restaurant downtown and now lives atop an artist’s studio in Highland Park. Chicken Boy is wonderful and kitschy. It is one of the oddball items that help make our landscape unique.

These were places I had seen before but not examined closely the way you do when you paint. To paint something well, you have to understand it. The truth of the matter is we do not always take time to truly observe. This series gave me that opportunity. 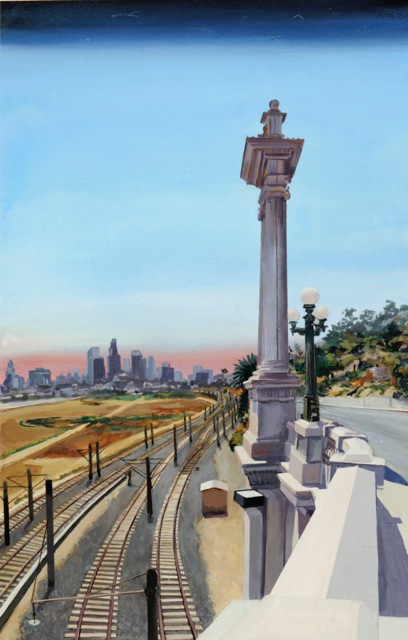 When I started this project, I didn’t think I had a message—I just wanted to paint 100 paintings. Now I see that, along with the side effect of learning more about the city, I may have created a starting point from which people can really see and appreciate this wonderful city. (Maybe I created the oddest guidebook of all time!)

Every time I see one of L.A.’s distinctive features demolished—like the art deco Richfield Tower—I feel an almost physical pain. I worry that my city is slowly being turned into a homogenized version of anywhere. I hope that before the quick-buck crowd tears down our history, a second look might convince them that we actually have something worth saving.

What makes L.A. for me is its quirky juxtapositions— unusual architecture like The Darkroom’s camera façade among the restaurants and storefronts of Wilshire Boulevard, interlaced with graceful bridges, spiced up with public art, and bejeweled with natural spaces.