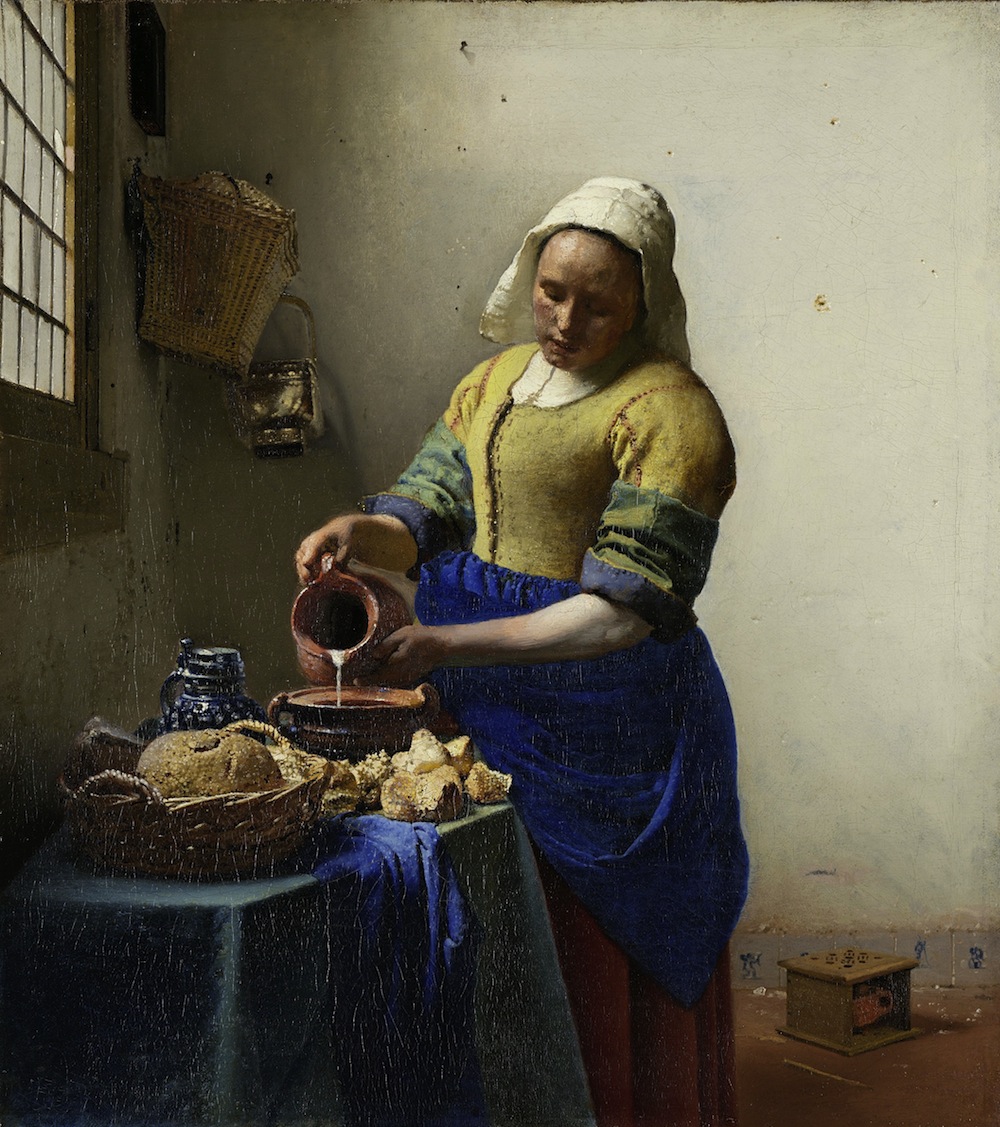 Ten years ago, I had a life-changing experience with art. I’d been going through a vicious divorce that year, struggling with depression, and frankly was not doing well in any area of my life. A powerful impulse to escape, to put an ocean behind me, took hold one Thursday afternoon. I cashed out my Frequent Flyer miles that evening, and arrived in Amsterdam a day later.

I’m a poet; I don’t have an art background. But I knew that Rembrandt was probably my favorite painter, and I went into the Rijksmuseum intending to bask in the light of every Rembrandt on display. On the way, though, I decided to take a glance into a small gallery to one side, where the museum’s four Vermeers were on temporary display. Walking into the room, I distinctly remember feeling “a shiver all the way up and down my spine,” as I later wrote in my memoir, Travels in Vermeer. When I stood directly in front of the paintings—especially “The Milkmaid,” “The Little Street,” and “Woman in Blue Writing a Letter”—I found them “unexpectedly small, but the force of the spell they cast is so eerily powerful, it’s difficult to move, to breathe.”


Because of my own personal crisis, the paintings had my measure completely; they made me feel things I hadn’t felt in years, and they showed me a vision of love that I believed in.

“The Milkmaid,” especially, seemed to foment a kind of tingling, electrical urgency that I enjoyed even as it disturbed and startled me. Immediately—within a few seconds—I knew that I was going to write about Vermeer. As a writer, I’d never felt such certainty, such conviction before. I never doubted it. Some “eerie, inexplicable intensity,” (as I later called it) called me, and I responded. But what was it? A writer from the Wilmington Star-News asked me that recently, and I could only chuckle. “I had to write two books to figure that out,” I said.

In “The Milkmaid,” a ruddy and stocky girl pours milk into a bowl from an earthenware pitcher. She stands at the center of her own world, magnificently realized as a kitchen with pocked, plaster walls and scattered, broken crusts of bread (she is making a bread pudding from the stale crusts). The girls’ eyes are gently downcast with an otherworldly and rapturous distraction. To look into her world seems simultaneously to be placed voyeur-fashion at the edge of life, but also looking into a mirror, to be offered an accurate yet ravishing analogue for the moment. This is one way to answer the reporter’s question. The other way is what I did next.

What I did was step outside the museum, sit down on the first bench I saw, and map an itinerary that allowed me to visit most of the world’s Vermeers over the next year, during my breaks from teaching. I read, I researched, I traveled, and then wrote about my journeys. The writing took two forms. I wanted to capture my impressions of the art while I still could so the first thing I did on returning home was to write poems about the Vermeer paintings I had seen, using the voluminous notes I had scribbled in Moleskine notebooks while standing in galleries. For instance, I wrote a poem entitled “The Milkmaid,” that begins like this:

How small the dreaming figure from across
the room in the Rijksmuseum. How calm the fact

of her lowered gaze, the open breadth of her brow.
As I move closer, though, each brushstroke of

impasto separates into the red-browns,
grays & lead-whites of her actual skin.

The vigorous, chalky pentimenti of
her sinewy forearms—arced half-consciously

Then, immediately after writing a few poems, I wrote about the whole journey, city by city, museum by museum, typing rather madly, and I included random encounters with strangers, memorable meals, etc., thinking it would add drama and immediacy. Eventually, as the pages accumulated, the nonfiction book became a memoir.

Once I had secured an agent for the memoir and turned my attention to the poems, I found that very little needed to be done in order to complete that second book beyond some thinking about context: history, politics, the pressures within which or against which art is created. I sent it off, entitled Vermeer in Hell, and it won a contest (Persea Books’ Lexi Rudnitsky Editor’s Prize). I queried Persea about the memoir, Travels in Vermeer, and they accepted it. In this way I wound up placing both books as companions with the same fine press, and this struck me as a poet’s dream.

But it is only now, with one of these books already published and the other about to come out, that I can look at this entire, dizzying episode in my life and try to pin down what it was about Vermeer that compelled me to write two books without any forethought. What is it that captured my attention so thoroughly for a few years?

To become obsessed with Vermeer is nothing new, of course. Everyone from Proust to Tracy Chevalier has felt Vermeer’s strangely potent allure. Once a rather neglected figure, his star has risen in recent years, especially after the great Vermeer exhibition of 1995 to 96, and has arguably eclipsed that great Dutch champion, Rembrandt. In our age, with our fascination with reality, with what we call “nonfiction,” we have gotten ourselves wrapped up in certain Vermeer mysteries, especially the puzzle involving whether he used optical aids or not. The suggestion that Vermeer’s images might be some sort of fantastic parlor trick—an imitation of nature made possible with a camera obscura, a theory popularized by critics David Hockney and Philip Steadman—has only burnished the legend. There are other mysteries as well, involving Nazis and art-forgers and all sorts of shadowy dramas.

But it turned out that none of this was very relevant in my case. My interest was deeply personal, and almost entirely between me and each painting. From this distance in time, I can break down my obsession into three parts. The first part is me: the state I was in, which was profound disillusionment and depression over relationships, and my divorce in particular, was important. I think it’s apparent to anyone that Vermeer paintings are anatomies of the inner life and intimacy above all. Because of my own personal crisis, the paintings had my measure completely; they made me feel things I hadn’t felt in years, and they showed me a vision of love that I believed in and, in the safety of galleries in The Hague and New York and London, could trust. This was, for me, where Vermeer’s technical mastery came in. Learning how he had created his illusionistic effects was not a scholarly pursuit for me. In learning and describing how he seduces—how he used his deep understanding not just of the surfaces of things, but of how light behaves as it reflects off each of those surfaces to place us in a room with what might as well be a real live person who seems to know us better than we know ourselves—I was finding new pathways into my own emotional core. Finally, if my encounters with Vermeer were transformative for me, perhaps I could also be of service to him—not only because of my obsession but because, as a lyrical poet, I might perhaps be well-suited to articulating what is going on within such lyrical art.

These books, then, are artifacts of a love affair. They are not so much about art as they are about love. Vermeer’s interiors make possible a sort of encounter in which the painting completely disappears in the viewing, and the viewer is what is seen into, and this is the key to Vermeer’s true design and the source of his work’s mystery.